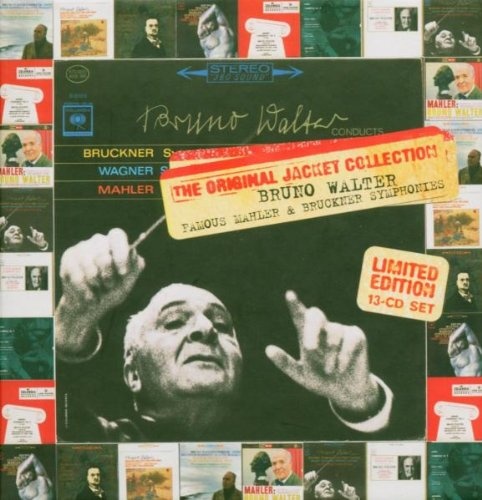 This 13-CD box set of Bruno Walter recordings, known variously as Famous Mahler and Bruckner Symphonies and The Original Jacket Collection: Bruno Walter Conducts Mahler and Bruckner Symphonies, is an example of Sony Music's American division trying to emulate the work (and the success) of the company's Japanese division. Indeed, the whole original jacket concept started in Japan, where Sony, BMG, and other labels have been reselling classic recordings by artists ranging from Erroll Garner to Elvis Presley, in miniature LP sleeve packaging, usually with state-of-the-art digital sound (20 bit/K2 and 24-bit mastering seem to be the twin standards), at premium prices since the mid-'90s. Sony Japan has done it with considerable success on artists such as Miles Davis, Al Kooper, the Association, Bob Dylan, and Bruce Springsteen. So the U.S. original jacket series was, at least superficially, co-opting a Japanese success, but not really -- in contrast to the Japanese releases, the U.S. original jacket series is totally inconsistent when it comes to upgrading sound, which is a major part of the allure of the Japanese mini-LPs. The George Szell/Beethoven symphonic cycle box, for example, was upgraded from the previously existing CD issues in the U.S., but the Leonard Bernstein entry uses the same masters from the existing American CDs; the same goes for this Bruno Walter set. And to top it off, where Sony Japan includes a mini-inner sleeve to protect its discs with each mini-LP, Sony's U.S. division apparently likes the idea of discs rolling out of the double-LP mini-jackets and possibly getting scratched and damaged.

It's not that the Walter box is bad or substandard either musically or in terms of sound quality. Quite the contrary -- it's mostly wonderful, and in spots even glorious. The recordings contained here, ranging from Walter's monaural 1945 and 1947 New York Philharmonic recordings of Mahler's Fourth and Fifth symphonies, to his early-'60s Columbia Symphony Orchestra stereo versions of Mahler's music, are exceptionally good representations of the works they encompass; there is also a certain unevenness inherent in the set, due to the fact that Walter was much more experienced (and noted) as an interpreter of Mahler than of Bruckner, to whose music he came somewhat later in life; but his Bruckner Symphony No. 9 is regarded as one of the finest ever recorded, and stands as one of the jewels of the Sony Classical library. The problem with the set is that everything in it was remastered in its current state in 1996 and has long been available as separate CDs, priced a bit more cheaply than the contents of this box. So the raison d'etre for this set seems to be the re-creation of the art from those original jackets in miniature, and that is precious little to offer for the $130 asking price. Further, the box isn't even complete -- there's a huge gap in the form of Walter's 1955 Mahler Symphony No. 1 with the New York Philharmonic, which is missing; it was, for a time, Walter's only extant Mahler First, and one that is startlingly different from the one he cut five years later with the Columbia Symphony (which is here). How it didn't make the cut is anyone's guess, especially as there exists a perfectly good master of the absent recording from the Masterworks Heritage CD release (which also used the mini-LP concept, designed a little differently) about eight years ago. Additionally, one of the performances here, of the Bruckner Ninth, has been upgraded in a separate release, using Sony's Direct Stream Digital technology -- why not at least include that, and better yet, why not upgrade the entire body of music, if they expect us to buy it anew? (There is bonus material, in the form of Walter's recordings of Wagner orchestral music, but all of that is available elsewhere as well). It's a handsome box, to be sure, and a great place to start (or end) with this repertory -- but who could possibly be interested in this set and not already own most (if not all) of the recordings and remasterings included here?