Every Solution Has Its Problem Review

The code of the schoolyard demands laughter at farts, balls, and the sex lives of animals. That same directive guides Every Solution Has Its Problem, the Columbia debut of Florida-based goof-offs Start Trouble. But while they delight in taking toilet-bowl humor, drug references, and Surgeon General's warnings right to the precipice of bad taste, Start Trouble's shtick leaves a sour aftertaste of mean-spiritedness and cynicism. Outfits like the Bloodhound Gang and blink-182 carry on the towel-slapping legacy of Licensed to Ill, but they do so by celebrating tomfoolery instead of rudimentary bits about bud and buggery. It doesn't help that Start Trouble's musical chops are a bit suspect. Behind the whiny, workmanlike vocals of Luke Walker, the band does try on paint-by-numbers punk revivalism for "Graduation" and "Get Over It." The songs say little, even for that vapid, cash-hungry genre, but they at least have some melody and guitar chops to work with. Sadly, the majority of Solution settles for the bland, blathering modern rock favored by late-'90s types like the Flys and Lit. "Please Leave" and "Non Stop" are thudding alt-rock disasters, hoping to squeak by on prurience ("I wanna f*ck nonstop/Baby I think you're beautiful," from the latter) and the undoubtedly expensive production and engineering of John Travis. "Chemical" shifts inexplicably into a Sublime-ish reggae shuffle; no one seems to have noticed that Walker copped Chicago's "Hard to Say I'm Sorry" for the verse. "Throw the Covers"' vacant apathy ("Who was that chick? Did I stick her? Forget about it....") is replaced by the misguided balladry of "Diggin' Holes," where Walker equates lost love with memories of endless bong hits and dissatisfying casual sex. For Every Solution Has Its Problem's final insult, Start Trouble includes an unimaginatively rocked-up version of the Ludacris hit "Move Bitch." The track wasn't Luda's finest or funniest hour. But as a cover choice it's appropriate in ways the band didn't intend, since the Atlanta rapper is a master of the outrageousness, slang, and sly sexual innuendo that so elude Start Trouble on their debut. 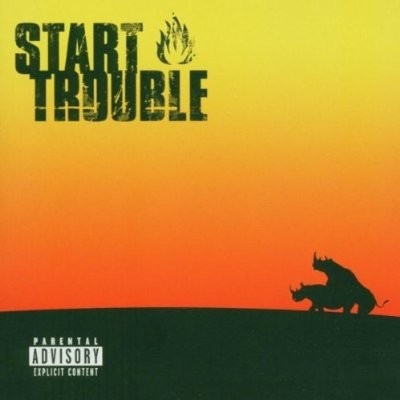 Every Solution Has Its Problem Album Information