Play's Don't Stop the Music is a marked improvement over the formulizing of 2003's Replay, which awkwardly layered adult themes over the Swedish combo's inherent fluff factor. Only a couple of years removed from their bright and cheery kid-pop debut, contemporary R&B-styled romps like "Hot" just sounded ridiculous. This time around, Play's people have gotten it right, or at least found an ingenious cross-branding opportunity. Don't Stop's first single is "everGirl," the theme song to Nickelodeon's new tweener brand of the same name. With a website chronicling the adventures of the "everGirls" -- Joy, Hope, Starr, and Skye -- and encouraging creative activities like writing poetry and gardening, as well as exclusive clothing and accessory tie-ins, Nick's everGirl looks like it's going to be around for the long haul. It's also a clever way to build momentum for Play's Anais Lameche, Anna Sundstrand, Rosie Munter, and new member Janet Leon (who replaces Faye Hamlin), instead of forcing the combo to perform shabbily written, even overly sexualized material in a misguided attempt at relevance. Like the self-confident and smart characters at everGirl's center, Anais, Anna, Rosie, and Janet are attractively multicultural. Their look is stylish but not trashy, and their album rounds out with empowering material like the title track and "Girls Can Too" (Payoff chorus line: "Cuz anything that boys do/Don't you know girls can too"). Bobby Brown's new jack hit "Every Little Step" is reborn as an entirely vacuous ditty featuring irritating boy-man Aaron Carter; covers of "It's the Hard Knock Life" and "Ain't No Mountain High Enough" aren't necessary, but they're performed capably and keep the album's positive vibe alive. Strangely, Don't Stop the Music's best moment might be in its last few minutes. "Another Love Story" features one of the album's only truly memorable vocal hooks, and gives the girls a chance to differentiate their voices from one another. This may have been a conscious move -- if Don't Stop suffers from anything besides the presence of Aaron Carter, it's a lack of individuality. But the album does pleasantly reinforce the aims of everGirl, while featuring strong enough performances, production, and songwriting that -- even if the everGirl brand gets downsized -- Play's burgeoning pop career should be on solid ground. 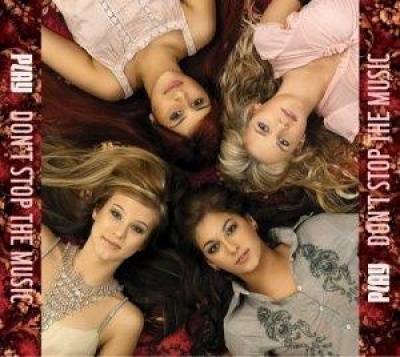