Like its predecessors, Cuando Amar Duele, the fifth album by television celebrity Víctor Garcia, has a lot of ballads along with a precious few rhythmic songs interspersed throughout. Garcia rose to fame on the TV Azteca reality show La Academia in 2002 after some relatively fruitless years as the lead singer of the band Grupo Nahum. He didn't win La Academia, but he leveraged the television appearance into a solo recording opportunity with the RMK Music label. Garcia made his eponymous full-length debut in 2003 and scored a breakout hit with "Otra Vez." He subsequently moved up to the major labels and topped the Mexican charts in 2004 with his second album, Por un Sueño. Third album Loco por Ti was another hit, the title track in particular. Fans of these previous albums will find Cuando Amar Duele similar in style, mixing Latin pop ballads with shades of regional Mexican music and slick production work. The occasional rhythmic songs like "Te Llevas Toda Mi Vida" and "Late Fuerte" are a blessing and keep the music from getting too sleepy as Garcia sings ballad after ballad. Album opener "Maldita Luna" is the clear highlight. It's one of Garcia's best songs to date and gets the album off to a lively start. Nine songs and 31 minutes later, Cuando Amar Duele comes to a dramatic close with "El Amor o el Dinero," the closest the album comes to straight regional Mexican music and the most fun. Garcia should drop some of the ballads from his albums and add more songs like "El Amor o el Dinero." 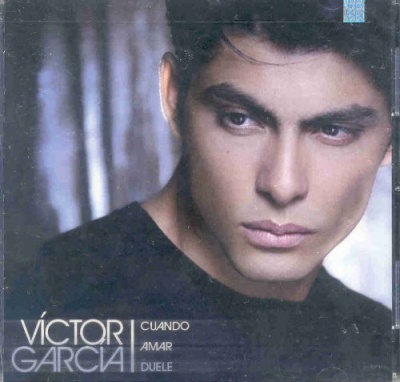