This is not the first time Creed Taylor's CTI, one of the most progressive labels of the ‘70s, has been anthologized, but The Cool Revolution -- tied into a series of album reissues handled by Masterworks Jazz -- is the most comprehensive one of them all. A straightforward compilation consisting of four themed discs, it focuses on the label’s years as a thriving independent, from 1970 through 1976. Disc one, “Straight Up,” spotlights the output most likely to appeal to jazz purists. Even the selection off Don Sebesky's Giant Box, the label’s biggest production -- something the average jazz critic quite possibly deemed not merely elaborate but flagrantly ostentatious -- allows plenty of space for soloists Freddie Hubbard and Grover Washington, Jr. and is nothing if not jazz. Disc two, “Deep Grooves/Big Hits,” features some of the label’s most notable reinterpretations and creative crossovers, including organist Johnny Hammond's expansive, rolling take on Carole King's “It’s Too Late,” Deodato’s number two hit version of Strauss' “Also Sprach Zarathustra,” Esther Phillips' terrifying reading of Gil Scott-Heron and Brian Jackson's “Home Is Where the Hatred Is,” and the immortal winding groove that is Hubbard’s “Red Clay.” Disc three further preserves Taylor’s legacy as the one who brought Brazilian music to the U.S., when he was with Verve in the early ‘60s. Releases from Antonio Carlos Jobim, Astrud Gilberto, Deodato, and Airto are showcased, while Turrentine’s version of Nascimento’s “Salt Song” also features the latter two, both of whom were present during dozens of CTI sessions. Much of “Cool and Classic,” the fourth disc, takes further strides to emphasize the label’s connection to the past as it achieved contemporary relevance. Cuts from Gerry Mulligan and Chet Baker's Carnegie Hall Concert, Vol. 1 and Baker’s She Was Too Good to Me are included, as are some standards -- spirited and occasionally radical looks at “A Child Is Born” (from Kenny Burrell) and “Take Five” (from George Benson). Bob James' “Westchester Lady,” however, had little connection to the past when it was released in 1976. It would have been an ideal punctuation mark for the box (it’s the sixth track of the fourth disc’s nine), not just because it’s technically the latest recording here. Its soaring fusion of funk, disco, and easy listening boldly (and gorgeously) exemplifies the oft-polarizing character of the CTI catalog. As far as significant omissions are considered, one can begin with the label’s earliest years under A&M, which were highlighted by Quincy Jones' Walking in Space and Milton Nascimento's Courage. There simply wasn’t enough room to go deep with the soul-jazz offshoot Kudu; as a leader, Idris Muhammad released some of the funkiest, most beloved dancefloor material on the subsidiary, but he is shut out, as are Phil Upchurch and Tennyson Stephens, whose duo album of moody soul-jazz has always deserved more attention. And while the late-‘70s releases weren’t successful from a commercial standpoint, there are plenty of gems across albums led by Art Farmer, Patti Austin, and Nina Simone. So, there is plenty to explore not just within the set, but beyond. The discs comes in gatefold, vinyl-style packaging. The liner notes, succinct for such a project of this scope, nonetheless supply plenty of information, while each track is accompanied with full session details (musicians, recording dates). It’s a shame that the 12” x 12” surfaces display 32 shrunken album covers instead of two previously unused photographs taken by Pete Turner, the man who helped give CTI its distinctive look. That would have no doubt been just another enticement for ‘70s jazz novices and junkies. 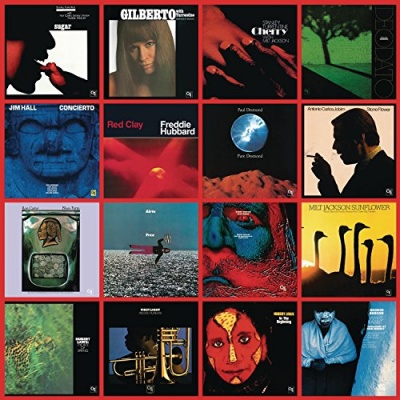