"Spain" is probably Chick Corea's best-known composition. Written in 1971, it was first introduced by his Return to Forever band and played frequently by many other Corea-led groups, including his 1988 Akoustic Band trio. Here it appears again -- and arguably, for all time -- in a powerful, extended form through the efforts of the London Philharmonic Orchestra, conductor Steven Mercurio, Corea, and five other members of the group Origin. Combining the sounds of Spain, Cuba, Brazil, Argentina, and New York with a whiff of Gershwin and Ravel full of whispers and thunder, Corea's arrangement won the 2000 Grammy. "Spain" is divided into a nine-minute introduction, 11 minutes of theme statement and improvisation, and a magnificent conclusion, weaving classical and jazz elements together in the tune's ultimate fulfillment. The second Corea composition on this CD, his "Piano Concerto No. 1," was supposedly modeled after the style of Mozart, although Wolfgang never had this much fire and passion. With Corea on piano, Origin veterans Avishai Cohen on double bass and Jeff Ballard on drums fronting the Philharmonic, the concerto contains over 30 minutes of musical textures, with beautifully melodic piano interludes and a recurring Latin pulse. This is the kind of intricate, multi-layered CD that sparkles brighter with each hearing; the "Spain" arrangement alone is worth the price of admission. All told, it's more evidence of Corea's restless and brilliant talent; fans who've followed his winding artistic path for decades may well see this CD as a clear monument, if not a peak. 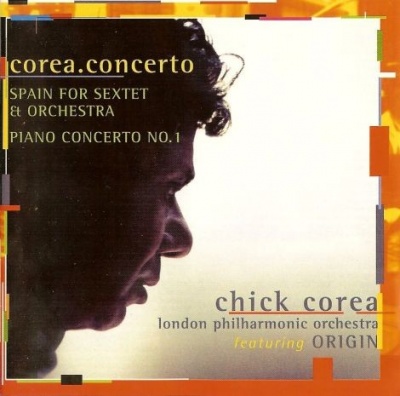