Johnny Cash has called June Carter-Cash one of the most neglected artists in country music, whose contributions will always be overlooked in the shadow of her husband's own success -- his only regret, he says, in having married her. On the couple's 1967 release Carryin' On With Johnny Cash and June Carter -- recorded a year before their marriage and while Cash was still officially, unhappily wed to his first wife Vivian -- June emerges briefly not merely as a longtime backup singer or opening act, but as an equal and able performer and partner. Indeed, her gritty country voice is one of the album's greatest strengths, providing a nice complement and counter to Cash's famous, unadorned bass. Carryin' On contains the hit single "Jackson," along with "Long-Legged Guitar Pickin' Man," a boisterous, rocking and rolling minor hit featuring Johnny in the lead role and June as his lovably nagging "Big-Mouthed Woman." Other performances include less effective detours into folk-rockish and pseudo-soulful realms: They cut a fine cover of Richard & Mimi Farina's then-popular "Pack Up Your Sorrows" and wade a little awkwardly through Bob Dylan's "It Ain't Me, Babe," Johnny gracelessly spitting out the "babe" of the title against "Ring of Fire" mariachi horns. Both sides of the record end with versions of Ray Charles classics, "I Got a Woman" and an especially shaky "What'd I Say," which, like "Babe," may prove as endearing to Cash fans as irritating to less-dedicated listeners. While Cash seems a little uncomfortable, or at least out of place, on the Charles numbers, June sounds surprisingly at home and rescues the performances with her soulful, growling vocals. The album's lowest moment, meanwhile, is its second track, "Shantytown," in which syrupy female voices provide sentimental, Hee Haw routine choruses of "I live down in Shantytown/Where the chicken's 20 cents a pound." Despite such moments, though, the album manages to overcome its weaknesses by the strength of the couple's collaboration; Johnny and June, eternally genuine and altogether unembarrassed even in the midst of their worst or most ridiculous arrangements, can perform corny or ill-fitted material with such honesty and conviction that you have almost no choice but to believe and enjoy it. Along with the duo's unforgettable voices, the record's mix of harmonicas, banjo, dobro, and hot electric guitar licks lends a down-home, carefree spirit to the entire effort. This, on some level, is Johnny and June at home, or -- as on the cover -- kicked back in a grassy field, Carryin' On, and the world is better off for having witnessed the whole thing. 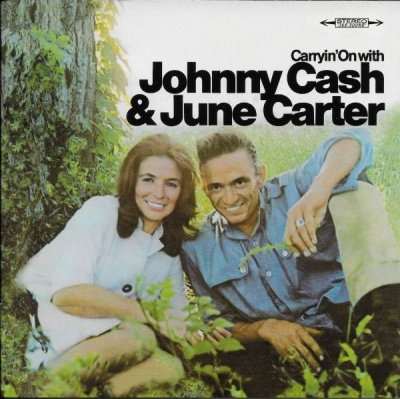