A new recording of a pair of Beethoven symphonies by an exciting and innovative young conductor used to be the very lifeblood of the classical recording industry. By now it seems almost odd to run across one, and the challenges of saying something new seem daunting. Rest assured, Italian conductor Giovanni Antonini, leading not his period-instrument group Il Giardino Armonico but the Basel Chamber Orchestra, is undaunted. This Sony Classical release certainly falls into the "shock of the new" category, but the whole thing is so briskly and even cheerfully done that you don't have much time to be shocked. Antonini offers historically oriented performances of the Symphony No. 5 in C minor, Op. 67, and the Symphony No. 6 in F major, Op. 68, "Pastoral," sticking to the speedy metronome markings of Beethoven's time, using a small orchestra, and teasing out inner wind voices and brass interjections. Others have done as much, although such readings are as yet hardly standard, especially on a major label like Sony. Where Antonini breaks new ground is in his conception of the two symphonies, especially the Fifth. Hard as it may seem to believe, he sees it as an essentially comic work, and harder still to believe is that he pulls it off, even in the finale, whose extended ending turns into the conclusion of the joke. Antonini rejects the "fate knocking on the door" interpretation of the symphony's famed short-short-short long motif as a figment of the imagination of Beethoven's assistant Schindler, arguing, in notes written with Hans-Georg Hoffmann (and given in English and German), that the Fifth was written in the playful spirit of German novelist and philosopher Jean Paul, whose Vorschule der Ästhetik was exactly contemporaneous with the development of Beethoven's middle-period language. The "knock" motif, say Antonini and Hoffmann, is "like an actor who interprets the same sentence time after time, thus expressing different emotions with the same words." This is plainly not your father's Fifth Symphony, but give it a try since every idea is consistently worked out and the interpretation is never radical for the sake of being radical; the slow movement is simple and graceful if a bit on the quick side. The Symphony No. 6 is also less unusual in concept, and perhaps even more beautifully worked out with small details. To offer a new Beethoven symphony cycle, as Antonini and Sony are doing here, requires an artist to have something new to say, but that's not going to be a problem. Very nicely recorded and a daring and winning move on Sony's part. 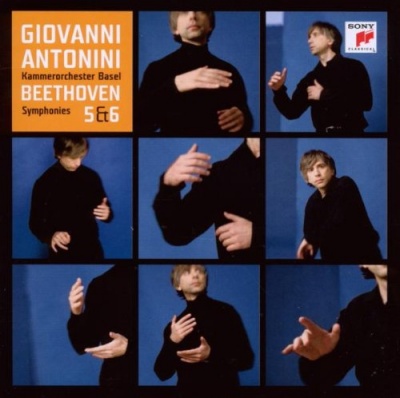