Piñata unsurprisingly reaffirmed that Freddie Gibbs and Madlib were a formidable duo. A little less predictable was that it took them to a new commercial level -- number 39 on the Billboard 200, easily the highest position claimed by a Madlib Invazion release -- and brought about a major-label deal through RCA. Five years after the triumph, the two return with Bandana. It's based on a bounty of beats Madlib crafted on an iPad and offered to Kanye West, who opted to use only one, heard on the gold-certified "No More Parties in LA." Gibbs claimed what was left, put in his work, and then met with Madlib to fine-tune it all. The result is an LP more rounded and more stirring than the excellent first one. Gibbs' ability to cover a tremendous amount of lyrical ground with minimal evident exertion, whether in first or fifth gear, is writ large. He's equally convincing regarding struggles and triumphs, palpably dispirited as he wrecks his family with unfaithfulness and drug dependency, almost distressingly brazen as he brags about converting his mother's residence into a narcotics distribution channel. An abundance of sexist swashbuckling language is nearly drowned out by a multitude of variably coarse broadsides directed at white forces of oppression, from the Atlantic slave trade to 45 and those in his administration, in addition to some less obvious targets. Gibbs is probably the only rapper on wax to declare "F*ck the 40 acres and the mule" (preceding a list of what his people received instead) and criticize 40 Acres and a Mule (specifically Spike Lee, for his depiction of Malcolm X). For all the debate Madlib stirred up by divulging his use of a tablet without any of the analog equipment on which he built his reputation, it's doubtless that these beats are among the producer's headiest, deep and detailed. They're creatively threaded with a head-spinning array of samples raiding popular and obscure soul and funk, reggae, Hindi thriller soundtracks, and even broken beat (shout to DJ Rels). Singular proof that these artists should continue to collaborate is "Cataracts," where a lovestruck mid-'70s R&B truffle is slightly accelerated to suit a defiantly exultant Gibbs. He and Madlib somehow make "F*ckin' up this bad food, fast food, gettin' fat" sound like the only way to truly live. 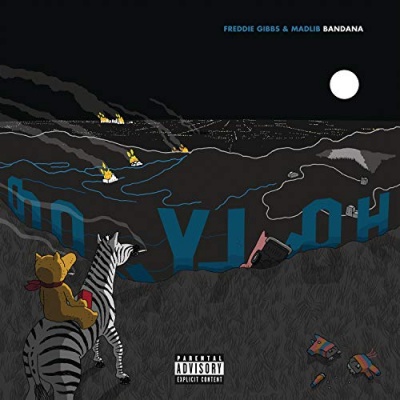