Bach: Unaccompanied Sonata No. 2 in A minor; Bartók: Sonata No. 1 Review

Even as major labels have continued to shrink their classical roster to almost nothing, one performer who has managed to maintain a constant relationship with Sony Classical for more than two decades is Midori. Few classical artists work harder; Midori has sustained a schedule of more or less constant worldwide touring for years, to the extent that one wonders when she finds time to record at all. Sony Classical has fashioned this release out of what were likely end pieces from other sessions not used in finished releases; though both recordings were made in Mechanic's Hall in Worcester, MA, the Bach was recorded in 2005 and Bartók -- with Midori's duo partner Robert McDonald -- in 1999. The Bartók Sonata No. 1 is quite impressive; Midori's pianissimo is truly pianissimo and there is a lovely multidimensionality to Sony Classical's recording; it is up close and personal to Midori's violin, and McDonald's piano interlocks with the violin in a seamless, yet distinctively separate fashion that makes this recording of the Bartók a real winner. Midori's Bach A minor Sonata is stunning in terms of interpretation and performance, but not quite so much as a recording; Midori is a little distant and bright in the mix, something that is awfully hard to achieve when you're the only person in the recording. She would've needed help creating such a lack of intimacy; however, it is such a good reading -- Midori's sense of dynamics is impeccable -- that it would have been criminal not to release it unless a better recording were possible.

The least impressive showing in this package are the liner notes by Curtis professor and arch-Schenkerian Eric Wen. We are told that, "the atonal language of Schoenberg dominates" the Bartók work, which is polymodal, not atonal. The accepted wisdom about Bartók is that he devised and arrived at the rather tough aspects of his harmonic language more or less on his own; the idea of making Bartók subservient to Schoenberg is a relatively new one, fostered in academia. Just because it's new doesn't make it true, and the idea may be historically unsupportable anyway. Midori writes her own excellent program notes; and there is a good one for the Bach A minor Sonata at Midori's website at www.gotomidori.com. Perhaps in this instance it is just best to ignore the booklet and enjoy Midori's fine music-making; there is certainly plenty of that here. 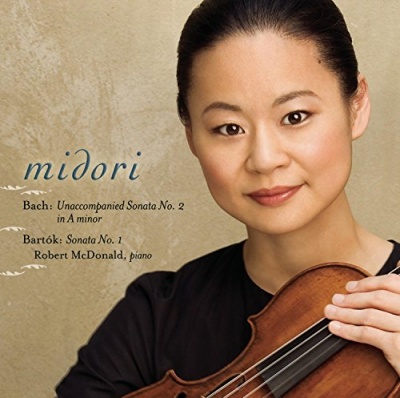 Bach: Unaccompanied Sonata No. 2 in A minor; Bartók: Sonata No. 1 Album Information