"Avenue Q has not been authorized or approved in any manner by the Jim Henson Company or Sesame Workshop, which have no responsibility for its content," reads a disclaimer found, among other places, inside the CD booklet for the original Broadway cast album of Avenue Q. It's an important statement to keep in mind, because, in essence, the show, with songs by Robert Lopez and Jeff Marx, who are also credited with the "original concept," asks what would happen if you crossed the children's television series Sesame Street with the gritty, urban Broadway musical Rent. Or, to put it more plainly, suppose all the puppets on Sesame Street had potty mouths? What if, for example, Bert and Ernie (or, as they are called here, Rod and Nicky [John Tartaglia and Rick Lyon]) were closeted gays ("If You Were Gay")? What if Cookie Monster (sorry, Trekkie Monster [Rick Lyon again]) craved not baked goods, but pornography ("The Internet Is for Porn")? And what if Miss Piggy's name was, instead, Lucy the Slut (Stephanie D'Abruzzo)? It's fair to say that the viewer and listener's reaction to Avenue Q will depend on a visceral response to the "original concept" of a hard R-rated version of Sesame Street. Is it a clever idea, or does it make you want to exclaim, as Kate Monster (Stephanie D'Abruzzo again) does during the show, "Ewww!" and "That's gross!"? The question is complicated by context. Like another heavily satirical show of the early 21st century, Urinetown, Avenue Q began off-Broadway (on March 19, 2003). But then it transferred to Broadway (on July 31, 2003). In an earlier day, such shows might have stayed off-Broadway, where audiences in search of edgy work would seek them out in small theaters in Greenwich Village. Instead, they now come uptown, where it's easy to mistake them for mainstream fare, especially when they win Tony Awards, as Avenue Q did for its score and book as well as an upset victory in the Best Musical category. After those accolades, the show's producers unexpectedly announced that Avenue Q would bypass a national tour in favor of a permanent production in Las Vegas, a decision that may have upset regional theaters, but probably saves many American children from inadvertently hearing a bunch of earnest, friendly looking, familiarly fuzzy puppets proclaim, "Everyone's a Little Bit Racist." Avenue Q is for adult audiences. 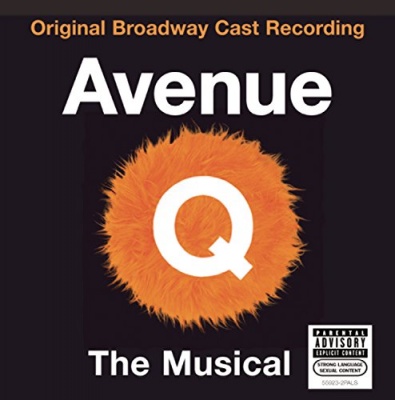