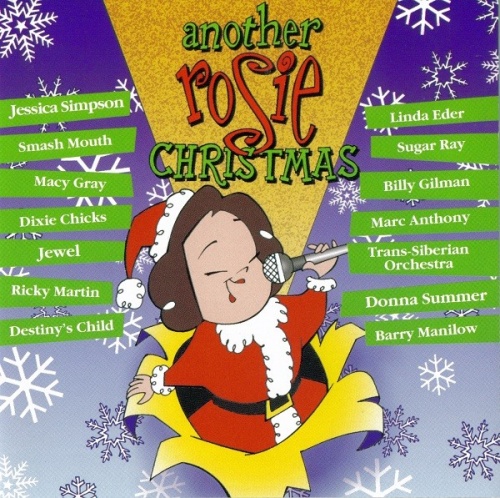 Five times a week, in true talk-show fashion, Rosie O'Donnell welcomes onto her television program a dizzying variety of celebrities intent on promoting their wares. The parade includes musical performers, of course, and as often as not O'Donnell jumps in to add her very modest singing talent to those of her guests. Those impromptu duets gave birth to A Rosie Christmas, the 1999 collection that found her participating with a group of mostly mainstream pop artists on holiday songs old and new, with the proceeds donated to her charitable foundation. Only a year later, this second volume adds 14 more recordings. They fall into three categories. There are songs billed to a performer "and me," eight tracks on which O'Donnell is prominently featured in conjunction with a star; songs billed to a performer alone, Jewel's "Face of Love" and Marc Anthony's "Christmas Auld Lang Syne," on which O'Donnell serves as an anonymous background singer; and songs billed to a performer "no me," four tracks with no participation from O'Donnell at all. Generally speaking, the less the nominal star of the proceedings has to do with the music, the better. On her television show, her vocal efforts display comic camaraderie, and that's occasionally true here, notably on "Merry Christmas From the Family," a song from the Dixie Chicks that sounds like it was borrowed from an old episode of Hee Haw. Most of the time, however, O'Donnell is so outclassed by her partners that she sounds like the amateur singer she is. Leaving aside the unwanted intrusions on the album by its top-billed performer, the record's stylistic range is so broad there's bound to be some track for any listener to like, as well as a couple to dislike. Will the same person who enjoys Linda Eder's characteristically over-the-top "The Bells of St. Paul" also like Donna Summer's disco-fied "Rosie Christmas"? Maybe not. But then, that's what makes the album like the musical segments from a couple of weeks' episodes of Rosie. It might have helped if there were more traditional Christmas songs (and the overall song quality might have been higher), but Rosie O'Donnell fans will understand the mix-and-match style and unevenness as typical of her inclusive approach.