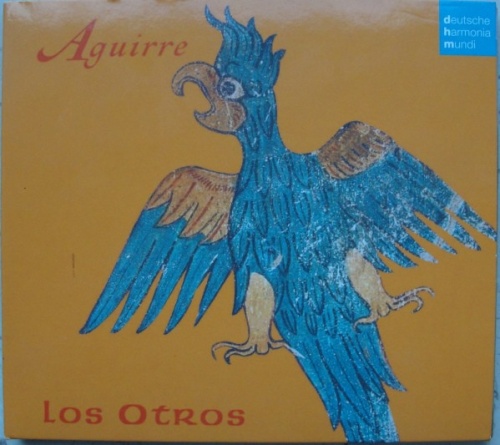 Aguirre is the second disc for the ensemble called Los Otros (The Others), which consists of the partnership of German viol player Hille Perl and American lutenist Lee Santana, along with a a second string player, the appropriately named Steve Player, and Spanish percussionist Pedro Estevan. The group investigates the fascinating repertory of Baroque-era music from Mexico, a focus that seems obscure until one hears how features of this music have trickled down to the present day. The inspiration behind Aguirre, for example, began to take shape when Los Otros met a group of Mexican folk musicians in Veracruz state and noticed similarities between the Mexican musicians' instruments and their own Baroque specimens. The ringing xarana (more often spelled jarana), a small guitar that gives some genres of Mexican folk music their characteristic sound, is heard frequently on this disc and blends right in with a viol and Baroque guitars. Veracruz is the most Caribbean of Mexico's major regions musically, and the rhythms of the modern son jarocho, the most famous example of which is the song "La Bamba," are heard in the music Los Otros play on this disc.

The music on Aguirre, however, is exclusively instrumental. Santana recounts in his liner notes how he was given the manuscript of a cittern instruction book by Mexican performer and composer Sebastián de Aguirre and "locked himself in" with it. Aguirre's manuscript contained not finished compositions but, Santana writes, "some bits of tunes, bass lines, chords, forms, sometimes germinal ideas for solos." It is, he says, "a kind of seventeenth century fake book," and Los Otros treat it much as it must have been treated in its own time -- as a basis for improvisation.

The results are a lot of fun, even if they don't quite live up to Santana's characterization of what the group is doing as a "little revolution" -- various performers have explored this music recently. The players are comfortable improvisers and work together well, better than many ensemble musicians specializing in the Baroque. The heavily bearded Estevan especially, who studied for a time with a Senegalese percussionist, carries the music along. The music is marked by syncopations, for this repertoire was touched by a distinct African influence that came into Mexico through Veracruz. At times, Aguirre almost approaches a jazz feel, and presenters from beyond the classical world should definitely check this album out -- Los Otros could work well on folk or world music stages. The notes, however, are a bit short on information and long on story-making. It is doubtless entertaining to read that one of the group members threw a coffee Thermos and a wine bottle as Los Otros struggled to shape their vision of Aguirre's sketchy notations. But we learn only in the most general terms what they started with and what they did with what they found. The music included falls into various Mexican genres of the day, some of them with part-African roots, and it might have been nice to know what a Marizápalos, or a Xacaras, or a Bran a la cran were -- and what the musicians were given to work with for each of these. An explanation of the 54-second gap of silence in the final track might also have been desirable. Nevertheless, Aguirre is a musically successful realization of an unusual and fascinating New World tradition.