A Place for Us: A Tribute to 50 Years of West Side Story Review

The Masterworks Broadway division of Sony BMG delves into the archives of Columbia Records and RCA Victor Records to celebrate the 50th anniversary of the Broadway opening of West Side Story, also commissioning a couple of new recordings. The point here seems to be to demonstrate the breadth of different interpretations of Leonard Bernstein and Stephen Sondheim's score, from Johnny Mathis' 1960 chart single of "Maria" to an excerpt from classical violinist Joshua Bell's 2000 world premiere of arranger William David Brohn's "West Side Story Suite." That excerpt also presents "Maria"; there is no attempt to replicate the complete score in a collection that skips over "Jet Song" and "A Boy Like That," but also has two versions each of "Tonight" and "One Hand, One Heart." The new recordings are a jazz piano reading of "Cool" by Eldar and a duet on "Tonight" by Kristin Chenoweth and Hugh Panaro, while a live 1963 recording of "Gee, Officer Krupke" by a jazz trio led by André Previn is previously unreleased. Major pop singers like Barbra Streisand and Julie Andrews share space with the Dave Brubeck Quartet on a set that tries to make the music from West Side Story seem both pop and classy. Actually, it always did, but here it also comes off as surprisingly versatile, adaptable to many different musical approaches. 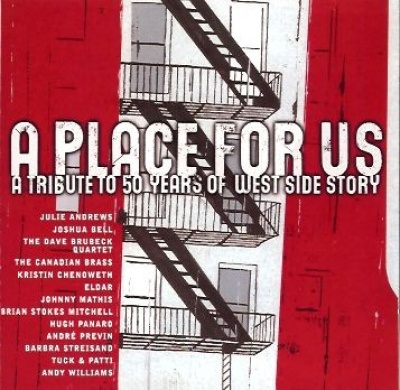 A Place for Us: A Tribute to 50 Years of West Side Story Album Information