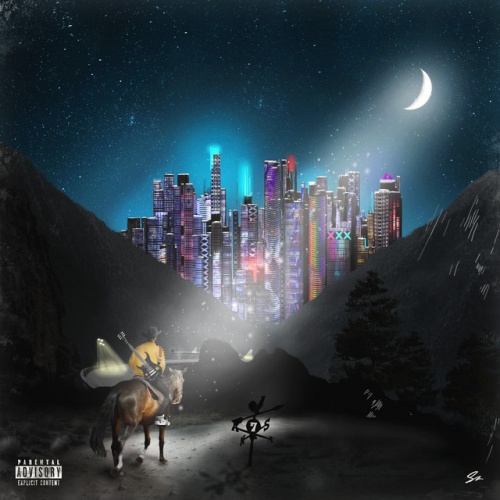 Made cheaply by a complete unknown, Lil Nas X's country-rap megahit "Old Town Road" is the stuff of pop culture legend. Never mind the controversy surrounding the song being kicked off the country charts for not being quite authentically country enough, or that those moves led to inarguably verified country star Billy Ray Cyrus jumping on an even more popular remix of the track. From a strictly musical standpoint, the song reasserted that an artist can come out of thin air at the right moment and capture the attention of the entire world with a simple, catchy tune. As the song stayed in the top of the charts for months, demand for new music from the viral star grew. The magnitude and ubiquitousness of "Old Town Road" pointed towards Lil Nas X ultimately taking his place in the one-hit wonders hall of fame, especially when follow-up single "Banzup'" stayed largely in the shadows as its predecessor stayed in the charts. 7 is the first substantial collection of songs from Lil Nas X, and it's still a brief 18 minutes long. While it includes both the original and the Cyrus remix of "Old Town Road," the other six tracks run an unexpectedly wide stylistic range. "Rodeo" veers closest to the trappy country formula, with Lil Nas affecting his rugged cowboy persona over a banging beat, complete with a dusty drawl and a burning feature from Cardi B. Perhaps most surprising is how often 7 explores grunge angst and guitar-driven alt-rock. The darkly catchy synth-driven "Panini" reinterpolates Nirvana melodies over a moody instrumental, and "Bring U Down" is by-the-books alternative radio rock. Cloudy, introspective rap track "Kick It" and yearning R&B styles on "C7osure (You Like)" just make the cartoonish rock anthem "F9mily (You & Me)" stick out all the more awkwardly. Lil Nas X aims for an ambitious range of styles on 7, but he ironically produces his best work when revisiting the country-rap hybrid territory he's best known for. There are enough hooks in this bouquet of confusing-if-passable genre-hopping tracks to keep him on the path to future hits, but nothing comes remotely close to the lightning in a bottle of "Old Town Road"'s accidental perfection.