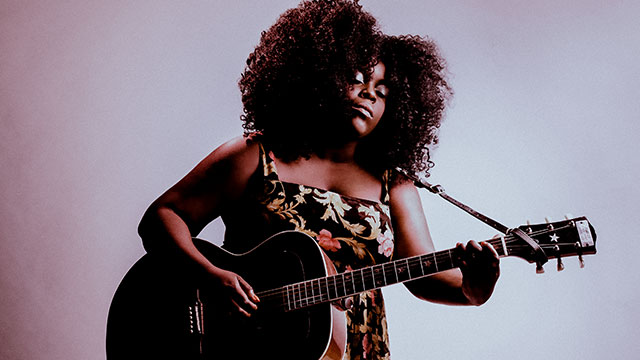 Eleven years ago, Yola Quartey took the stage with Massive Attack at the Glastonbury Festival, just outside her and the band's hometown of Bristol. She sang classic songs like "Safe From Harm" and "Unfinished Sympathy" to the 60,000-strong crowd, which made for an unforgettable experience, but she was unsatisfied musically.

She struck out on her own and focused on three of her main influences -- Otis Redding, Dolly Parton, and Aretha Franklin -- and caught the attention of Dan Auerbach of the Black Keys, who teamed up with Yola to produce and co-write her debut album, Walk Through Fire.

AllMusic spoke with Yola about the paths she didn't take, avoiding the retro route, and how her preternatural musical tastes as a teenager led her to seek out older friends.

AllMusic: When you first met up with Dan, did you bring him complete songs, or was it more "here's where I want to go with this"?

Yola: I had written a bunch of songs, but then there was an opportunity to co-write with him. I came to him with a song that I’d written, and I was like, "OK, this is kind of the area I wanted to head in with this record, I’ve written a bunch of stuff but I’m going to keep that back for another time." I had this opportunity to write not just with Dan Auerbach, but Dan Penn, Pat McLaughlin, Joe Allen, Roger Cook, and all these legendary writers who have all of these credits, and I wanted to see whether one of my songs could fit comfortably up against these songs by these legendary writers. And I have a song on the record that’s only written by me [“It Ain’t Easier”], and it just sits in there beautifully, so that’s kind of what I wanted and that’s exactly what I got.

AllMusic: Is collaboration something you've always been good at?

Yola: The first 30 years of my life were fiercely and exclusively collaborative, I’d never done anything on my own before, and then I started learning how to do things on my own, and I realized it’s a very different mindset. So I got used to that dynamic, wrote a bunch of stuff, and I tried to just figure out in what environment I’m most productive. So when I went back to being collaborative again, I could be more selective with the environments I chose to get involved with, the types of sounds, and how much I could feel comfortable with giving over the workload and the responsibility of producing the record to somebody else. The movement from being collaborative to solo to back again is what made the record come out the way that it has.

AllMusic: As exciting as it was to work with all those people, did you still feel like you could speak up if something didn't feel right?

Yola: One of the important skills to have as an artist is to be able to get what you want to say across early enough in the cycle that you haven’t committed a whole load of time to it yet. We wrote a lot of songs, so when we picked the ones to do, it was just the ones that came to mind, the ones we were most excited to record. We must have written 20, 30-something songs, and we tracked 18 of them. It helps that you can work with someone with such a high level of taste as Dan, that definitely makes my job easier. So when we’re going into the tracking situation, instead of thinking about anything in a negative way, we were just thinking about the most positive way to think about something, the songs that are motivating you most. That’s a better way to look at life.

AllMusic: The album touches on a few classic country and soul sounds, but it's definitely not a retro exercise.

Yola: Since I was four years old, I was singing all the time, and in elementary school it dawned on me that the thing that my voice did was different to what everyone else’s was doing. I knew I loved Dolly, I knew I loved Otis, I knew I loved Aretha, but I also loved pop music and hip-hop. There were so many things happening in pop music around the 90s that were nothing like what came out of my face.

So I’ve never really had a choice. I can contort my voice to make it sound a little bit more like what everyone else is doing, but that normally just hurt. I’m kind of blessed in this “I suppose I’m just going to do me” situation. I’m not really thinking about what to do technically, despite where I am with technical vocals, I’m just trying to feel, hard, because I know if I can find a way to connect deeply, that it will change everyone’s perception of the song.

AllMusic: Was there ever a risk of going off in a direction that didn't suit you?

Yola: Big time. There were at least two instances where I could have been a millionaire already, but I couldn’t. Everyone’s got a specific axe to grind, “I want to see this in music,” and every album is a pursuit of perpetuating that philosophy. So when you’re working on things that aren’t that, you're just biding your time or keeping the bailiff from chucking you out of your house and taking all your shit. That was what that was. “Oh, you did that?” “Yeah, because I was poor.”

AllMusic: Were you able to find friends your age who were also into Otis, Dolly, and Aretha?

Yola: I was the weirdo. I ended up being drawn to people five-plus years older than me; say you’re a 15-year-old kid who’s friends with college students and people in the workforce, it’s probably a stage in your life where there’s the biggest lifestyle and experience difference. But that’s what forced me towards certain friendship groups and musical people, I felt pushed into a certain direction by my taste. That’s what led to me forming a band with some of those people when I was a kid, because that’s what we had in common. We may not have had anything else in common in life, but music was definitely dead center.

AllMusic: Did they get good at sneaking you into bars?

Yola: All the time, yeah. I was probably part of the final era of kids that were trying to sneak into bars instead of staying home and playing Call of Duty. One of the upsides of being the token black girl is that if you’re in a predominantly white space, which I was for most of my life growing up, people don’t always know how to age you, and that can be really bad when people are trying to judge how vulnerable you are. You have an ambiguity of age for a certain amount of time, and that worked in my favor when I was growing up, for that easy entry to bar situation. I’ve kind of got a baby face, but they don’t know if that’s because black people don’t age as quickly or what. So that got me into bars, and probably got me into more trouble and friendship groups that I shouldn’t have been involved in, but I wouldn’t take any of that back, even the bad stuff. It’s songwriting fodder, as well. It’s all positive.

AllMusic: You've toured as a singer with Massive Attack, who I think of as exclusively nighttime music, and I hear a lot of sunshine on your record.

Yola: You say you hear all this brightness, which is the lushness and melody and harmony, and that’s something I’m passionate about in music. You don’t have harmony on Massive Attack songs, that’s not something that happens. It’s about minimalism and space and darkness, that brooding energy. Although my vocal was strong enough to stand up on its own in that sense, that wasn’t the fight I was fighting. When people are like, “So why did you leave?” it’s because of exactly that reason. The sounds are completely opposite. So I respect that music for sure, but there’s a difference between being a fan of a certain kind of music and thinking that that’s where you are identifying with music.

AllMusic: Even so, I imagine singing a song like "Unfinished Sympathy" at Glastonbury was probably a pretty electric moment that could go a long way towards building one's confidence.

Yola: If you’re going to get onstage in front of 60,000 people, you’d better have confidence sorted. My battles with self-belief have always been more personal than regarding my voice. My ability to deliver has always been something I can lean back on, something I can recline on, knowing it’s solid. I also lost my voice because I was camping at the time, and I got that camper’s throat and I had to stretch my voice out, so somehow I managed to maintain my chill, but I didn’t have all my range for that song. That was an added extra I wasn’t expecting.

Bristol almost empties out at Glastonbury, so the first ten lines, I could recognize a lot of people. It was a real home anthem, and with Massive Attack being from Bristol, and I was born right in the center of the city, this is all stuff that was all home, very comfortable, even though it was massive and on national television, live, it was as comfortable as you could have something like that be.