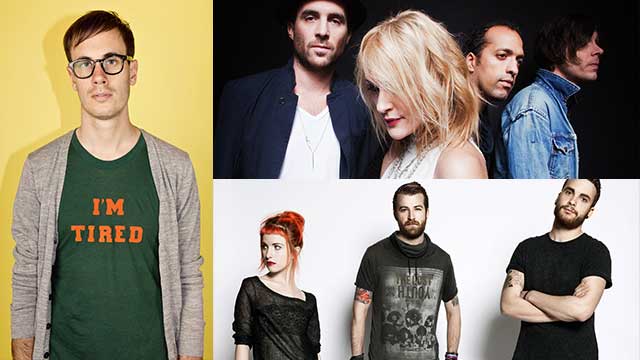 Sure, it's the beginning of the end of summer here at AllMusic HQ, but that doesn't mean the fun has to end. Take it from Paramore -- the band switched gears after parting with the founding Farro brothers in late 2010, and earlier this year they released their first studio album since the shakeup, which debuted at the top of the Billboard 200 and got plenty of love from fans and the media alike. Come mid-October, the band takes to the US and Canada with some very cool friends -- sweet modern pop purveyors Hellogoodbye and hooky new wave revivalists Metric -- for the latest leg of the aptly named Self-Titled Tour.

Live in one of the cities on the schedule, or willing to travel? Then here's your chance to win tickets for you and a friend to rock out at the Self-Titled Tour.

On Monday, August 26 we'll draw the winner at random from our Facebook fans, Twitter followers, and mail-in entrants who shared, retweeted and posted.

Details about this giveaway:
• Giveaway begins Monday, August 12. Winner will be randomly selected on Monday, August 26.
• Must be a U.S. or Canada resident to win.
• Winner will be contacted via the service they used to enter, except for mail entrants who will be contacted via the info they provided.
• This giveaway provides a pair of tickets for the Self-Titled Tour on the date of the winner's choice, while supplies last. It does not include other related expenses, including but not limited to travel, lodging, and food.
• If no response is received from the winner within 12 hours, a new winner will be drawn from the pool of candidates.