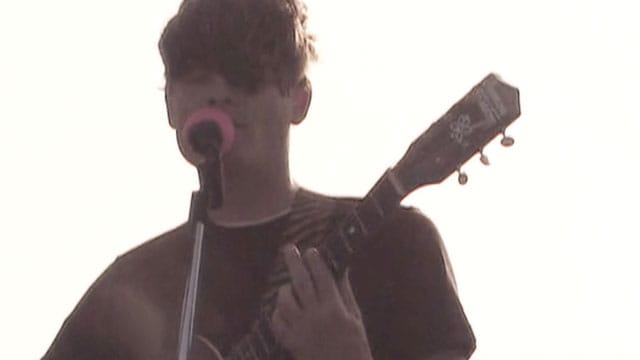 Oh Sees mastermind John Dwyer doesn't like to dwell on the past, but on the occasion of a trio of reissues from his deep back catalog, he's willing to play ball. The albums in question -- The Cool Death of Island Raiders and the Graveblockers EP, both released in 2006, along with 2008's atypical live recording Thee Hounds of Foggy Notion -- paint an early picture of a band in a very different mindset from the one that released last year's proto-metal/jazz-rock inspired Smote Reverser.

AllMusic spoke with Dwyer about being surprised by some of the older material, if he sees a through-line from the band's psychedelic garage rock days to its current, louder incarnation, and the lessons he's learned from Iron Maiden and the Stooges. The reissues have been rolling out over the spring on Castle Face Records, with Foggy Notion due out May 24 and Graveblockers following on June 10, while the band has gigs booked through Halloween. The band also shared a streaming version of the DVD from Foggy Notion, which features an early Thee Oh Sees lineup playing in a variety of locations.

AllMusic: With these reissues, was it important to present them just as they were, or did you want to spruce them up a bit?

John Dwyer: They’re all a little bit different, but not so much by intent. Hounds originally came with a DVD, and now that that’s sort of a defunct medium, we didn’t include that in there. And Graveblockers was a double five-inch on this Austrian label, so that is now a 12-inch. The reissue of Cool Death, the label that originally put that out used low-res artwork, so even though it still looks like shit, in the best possible sense, at least the proper artwork was used. And JJ Golden went and remastered all of it.

AllMusic: So you didn't feel compelled to go back and tweak anything.

Dwyer: No, no. I’m happy to put this stuff out because a lot of it was very small releases, or Cool Death, which is now 300 dollars on Discogs, which is absurd and only based on collectors driving prices up. I’m not going back to fix anything, because I just don’t have time, nor would I want to. That’s the record of it, that’s what it is, a record of a moment. I’m not gonna George Lucas it.

We barely repair stuff contemporarily. On the last record, there was a mistake on guitar and it was a really good take otherwise, and we either couldn’t punch it in or didn’t notice until after, so I just put a sample of a cougar growling over it, a little band-aid. That’s the extent of my ability repairing things.

AllMusic: What sort of memories came back listening to these older records?

Dwyer: I hadn't listened to these records in years, I'm always moving forward. I’ll listen to our new record a million times trying to put it all together, and once I’ve listened to it mastered and one copy of the LP to make sure it’s not totally fucked, that’s pretty much it.

So it’s interesting after so much time to go back and listen to these old recordings, and some of it still stands up to me. There are some parts that I genuinely forgot. We have such a deep catalog that there’s a lot of improvisational moments, stuff we didn’t do live that I completely forgot about. If we don’t play it live, I just forget about it. Maybe it didn’t translate well because there were violins or something, so it’s been interesting to go back and remember some of the people who worked on the records who aren’t in the band, and just the partying around the time of that.

AllMusic: Do you still recognize yourself from that period?

Dwyer: For sure. There’s still a ton of common threads between this music and what I do now, now it’s just heavier and more proggy. All the seeds for all these ideas were always there, it’s always been a really slow and steady crawl to get where we are. We change it up occasionally from record to record, but anyone who knows our stuff has heard the continuum throughout.

AllMusic: Right, like I listened to 'Cool Death' and went right into 'Smote Reverser...'

Dwyer: That’s a big leap. You have to incrementally climb there if you want to hear the transition. I have my head up my own ass at all times, so I’m familiar with every little nuance of everything I’ve ever done.

AllMusic: Can you still revisit this sound or is it securely in the past?

Dwyer: Yeah, I use a slightly better tape machine now, and a lot of those records were recorded by other people or on four-tracks, so you tend to make executive decisions that become apparent in the sound and the music. Me and Brigid [Dawson] just worked on a record called Memory of a Cut Off Head a while ago that was more polished, but those records sounded the way they were somewhat out of choice but also out of necessity. If I wanted to, we could. It’s just a matter of having the time and the desire to do it.

AllMusic: You're an Iron Maiden fan, and they have a routine of touring on their new album, and then a second tour that emphasizes a specific era from their past. Does that have any appeal to you?

Dwyer: I’ve done the reunion shows with old bands, and when me and Brigid recorded that record I mentioned, we did some older material, and it was fun, but I’m usually looking forwards and I’m not super interested in that. Doing Coachwhips again, my old band, was fun for a minute but got old pretty fast, because it doesn’t challenge me anymore, it’s really not where my head is at. So I was like, “I don’t want to do that unless someone is gonna pay the dogshit out of us.” It becomes about money when I don’t want to do it anymore: “Sure, I’ll do it if you pay the hell out of us.”

Iron Maiden is the exception to the rule on so many fronts because they’re an incredibly DIY band that has made themselves these masterpieces of albums. So the idea of them playing certain eras of their music, they still sound like Iron Maiden, so it’s a loose idea for them to even say, “We’re going to play the middle era!” It just sounds like Maiden. They haven’t gone electronic or anything, and they’re smart that way. We have just changed more dramatically.

AllMusic: Since you've been through it, are you able to tell which reunited bands are having fun and which ones aren't?

Dwyer: We have definitely played with old bands that have been around in some form or another or are doing a reunion who either were super into it and completely blew my mind and surprised me, because I go in with low expectations, and other bands where I expected them to be better and they were awful. The best bands we played with that were OG bands who were only playing occasionally were Red Krayola and the Stooges. I knew the Stooges were going to be good because everyone told me they were going to be, and holy shit, they were so fantastic. We’ve played with some bands who seemed like they were phoning it in in a major way, and that’s a drag to watch.

AllMusic: Do you make mental notes on how to avoid that fate?

Dwyer: Yeah. Don’t sigh onstage. Act like you’re having a great time even if you’re not. But we’re lucky, because we respond to the audience and we do more improv-y things, which keeps it exciting. There was an artist I was particularly excited to see, and I could tell he was so sick of playing his hit song that when it came time to do it, he left the stage. The band was playing it, the crowd was going nuts, and they’re playing it without him for a long time, and he just went to the back and drank a glass of water. We were sidestage and I saw him slumped over, dreading going back onstage to sing this song, and he’s probably performed it a million times and had a million other records since then. So I get it. But then he went back onstage and put on a good show.

AllMusic: Do you still have the pink acoustic guitar from the Foggy Notion video?

Dwyer: I don’t, I sold it to the door guy who worked at the club across the street from my house years ago at a yard sale. He bought it for his daughter, and I had put these fake bullet holes in it. I had bought it at a pawn shop for like 30 dollars, but weirdly, that guitar was very playable and good for open tunings, because it was kind of junky anyway and had that sort of seat of the pants sound I was looking for on those records. It had a pickup but I took it off so I could put it on scrap metal and shit back in the day when we were making more noise-related stuff, so we’d just use the magnets, and when it came time to put it back on the guitar I couldn’t find the component that held it in, so I used blue painters’ tape.