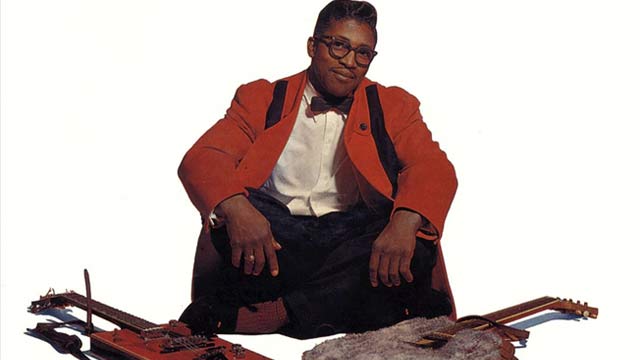 I was born one night about twelve o'clock
I come into this world playing a gold guitar
My papa walkin' around stickin' out his chest
Hollerin' "Mama, this boy is gonna be a mess"
-- "The Story of Bo Diddley," 1959

Bo Diddley was a bonafide legend, a titan among mere mortals, a braggart who made Little Richard seem polite, the biggest and baddest of all the original rock & rollers. Nothing about the man was small "not his size, not his music, not his influence, not the myth that he cheerfully, ceaselessly created on song after song, many bearing his name somewhere in the title. Like so much in his music, the tale of his birth that he spun "The Story of Bo Diddley" was tall. Bo never met his father, a minor factual detail that doesn't really matter when considering the legend of Bo Diddley, the man who was born as Ellas Bates, adopted the surname McDaniel when being raised in Chicago by his mother's cousin Gussie and eventually became known as the larger than life Bo Diddley, a name he took when he was playing the streets of Chicago with a makeshift band with his right-hand man Jerome Green in tow. With Jerome shaking maracas, Bo created the beat that bore his name, a variation of the rhythm known as Hambone, a shave-and-a-haircut beat that can be traced back to slave plantations and was widely played in vaudeville and minstrel shows during the early part of the 20th Century. How Bo learned the Hambone is as cloudy as the origin of his name, but that murkiness only added to the wallop of music: he seemed to come out of nowhere with his mighty beat, sounding quite unlike his New Orleans peers Fats Domino and Little Richard or his Chess labelmate Chuck Berry.

That oversized, swaggering beat quickly became widely imitated, with Buddy Holly's "Not Fade Away" and Ronnie Hawkins' version of "Who Do You Love" being the first inkling of the tidal wave of Diddley-inspired rocking to follow. As the '60s rolled on, band after band rode Bo's train: the Rolling Stones' recorded "Mona" and gave Muddy Waters' "I Just Want To Make Love To You" a Bo Beat, the Pretty Things took their name from one of his singles, the Who's "Magic Bus" was fueled by Diddley, the Yardbirds covered Bo's "Here 'Tis" and "I'm A Man" picking up on the wild modernity of his recordings, while Captain Beefheart & His Magic Band tapped into his flat-out weirdness in their cover of "Diddy Wah Diddy." This was hardly the end of Bo's influence, either, as the New York Dolls' sped through "Pills" on their debut, Dr. Feelgood found the core of their gritty, nasty rock & roll via "I Can Tell," the Clash had Bo open for them on an American tour, while two Georges Michael and Thorogood brought the Bo Diddley beat into '80s with their hits "Faith" and "Bad to the Bone," while the man himself was part of a Nike ad campaign in the early '90s, around the time Paul McCartney revived "Crackin' Up" for his Russian-only oldies album.

This laundry list of covers, influence and achievements suggest that Bo tore up the charts in the '50s and '60s, which isn't really the case: he had hits but unlike Fats, Little Richard, Chuck Berry or Ray Charles, he didn't quite cross over to the pop mainstream. During the '50s, he often topped the Black Singles Billboard chart, but never racked up pop hits like his peers. Why didn't Bo have more pop hits? Maybe because he had a gritty blues backbone to his music, but Bo was no bluesman, at least according to the conventional definition of the word. Even with "I'm a Man" and "Before You Accuse Me" to his credit, Bo wasn't backwoods, he was a creature of the city, jive talking and hustling, cranking up his amps until they burst, wrapping his thick guitar in waves of tremolo, singing about cops and robbers and roadrunners, threatening to go kick the ass of Kruschev. Compared to the frenetic teenage rhythms of Little Richard or the school day poetry of Chuck Berry, this was adult music, filled with rude humor and good-natured menace, hinting at relations and situations far beyond the average rock & roll song of the '50s.

If he didn't consciously mythologize America the way that Chuck did, he nevertheless captured how America felt in the '50s and '60s. Appropriate for a guitarist best known for a rhythm, Bo blurred barriers everywhere: he had female guitarists (Lady Bo and The Duchess) in his band when rock & roll truly was a man's game, he captured the rhythm of streets slang, he had an understanding that records were different than live performance, how groove and feel could trump songs on a 45. Sonically, his singles pushed barriers, filled with fuzz tones and elastic guitars, galloping pianos, sawing violins and call-and-response vocals with Jerome. Listen to a collection of his Chess/Checker singles the best currently being Universal UK's 2006 set The Story of Bo Diddley and the depth and range is astonishing, proving that there was far, far more to Bo than his patented beat and walloping gut-bucket blues. That variety kept him going through the '60s even when he fell off the charts and it also meant that he could ease into dirty psychedelic funk-rock in the '70s (chronicled on Raven's 2004 set Tales from the Funk Dimension). Similarly, Bo's humor which, like his music, was multi-dimensional, ranging from one-liners and dirty jokes to bizarre absurdities could overshadow what a great songwriter he was. That above list of covers illustrates that he has plenty of rock & roll standards to his credit (and to that list Mickey & Sylvia's "Love is Strange," which he penned but did not release; it surfaced this past year on Hip-O Select's tremendous I'm a Man: The Chess Masters, 1955-1958) but his catalog is filled with lesser-known gems, sides like the strange funk of "Craw-Dad" and the cool strut of "Walkin' and Talkin'" or the furious "You All Green."

Bo also cut some fine straight-up LPs, like Bo Diddley is a Gun Slinger or the live Bo Diddley's Beach Party, which is as raw and exciting as any live early rock & roll record can be. It, sadly, has never hit CD, nor has a lot of other Bo Diddley's Chess/Checker sides. The lack of reissues only proves that all these years later, it's hard to push Bo Diddley into any particular box. He's harder to categorize and package than any other early rock & roller, but the key to his greatness is that he was too big to easily wear any one label. And that's the reason why Bo Diddley kept writing songs about himself: He was too big to be contained in one or two three-minute songs. Thankfully, Bo left behind a whole mess of them behind in a legacy that has few peers.