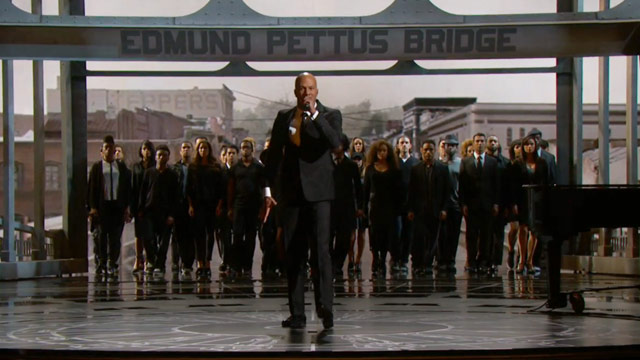 Music had its night to shine a few weeks ago, but it still received plenty of attention at the 87th Academy Awards last night. The Grand Budapest Hotel picked up the award for Best Original Score and "Glory" from Selma took the prize for Best Original Song,

This year's opening number was helmed by host Neil Patrick Harris and featured appearances from Anna Kendrick, Jack Black and a phalanx of Stormtroopers and centurions.

"Everything is Awesome," by Tegan & Sara and the Lonely Island, was handled with a "more is more" philosophy, leading to a visual overload on par with The Lego Movie itself.

If social media last night was to be believed, no one had any idea that Lady Gaga could actually sing until this medley of songs from The Sound of Music, which touched on the opening song, "My Favorite Things," "Edelweiss" and "Climb Ev'ry Mountain."

Common and John Legend performed the Oscar-winning "Glory" from Selma with help from some elaborate set pieces.

Jennifer Hudson accompanied the annual "in memoriam" montage with a version of "I Can't Let Go."

Rita Ora sang "Grateful" from Beyond the Lights.