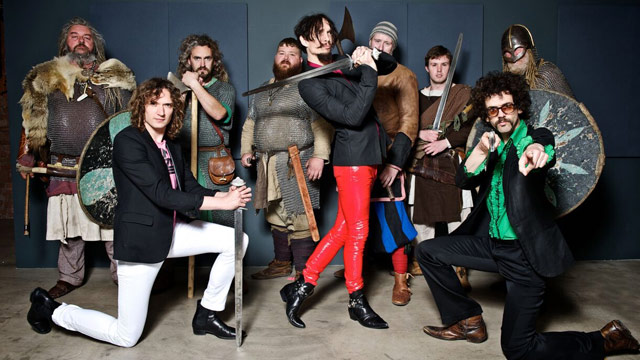 In 2003, willfully campy British rock band the Darkness filled a previously unknown void for big, bombastic rock with the album Permission to Land, featuring the mega-hit "I Believe in a Thing Called Love" and fan favorite "Get Your Hands Off My Woman." Not long after, the band folded under the weight of massive expectations and substance abuse. They returned in 2012 with Hot Cakes, and have now followed it up with their fourth album, Last of Our Kind, a record that editor James Christopher Monger, in his four-star review, says could be the band's best album to date.

We talked to Darkness guitarist Dan Hawkins, who also produced the new album, about his vision for the record before the band hit the studio, whether it's difficult to wear the hats of both producer and band member simultaneously, and how the new album stands out from the rest of the band's output.

AllMusic: As the producer, did you have a specific goal going into this album for how you wanted it to turn out?

Dan Hawkins: From my point of view, it’s a difficult balancing act, really, of having total freedom and letting people basically record a fart if they felt like that’s what they wanted to do and trying to see it through to its natural conclusion, and then also trying to do with this record what I really wanted to do, from a producer’s point of view, which was I really wanted to make an album that wasn’t a slave to standard song arrangements, and letting the guitars do what they wanted to.

Our frame of reference for that would have been our first album, where we were writing whole sections of music into the arrangements just for the guitars to do their thing, and for whatever reason, maybe we won a couple of Ivor Novellos [British music awards] and suddenly we thought we were brilliant songwriters all of the sudden, where actually that comes from great riffs and Justin having to challenge those riffs with his vocals, so I guess the main aim was to have the riffs stand up on their own, and if this guitar solo needs to keep going, maybe something more long-winded than you’d put into a traditional arrangement, but you find it interesting to not go the trad route, that was the main thing. Stop writing songs and start writing riffs.

AllMusic: That sounds like what happens when you let the guitar player produce.

Hawkins: Sort of, yeah. That and the guitars end up being way too loud. I did a good job of not doing that on the mix, but I would say the guitar solos are pretty fucking loud. Every time a solo comes in, you certainly know about it.

AllMusic: Since you were the sole producer this time, did you feel a heightened sense of responsibility or ownership of the album?

Hawkins: I honestly was less stressed about it than any album I’ve made as a producer or co-producer. The big thing for me was I knew I was going to mix this record and not hand it over to someone else. In a way, it gave me responsibility and complete control, and as I went along I realized that maybe I had been pissing in the wind in the past and not really knowing what I was aiming for, where with this one I did know what I was aiming for. I find it more stressful when you don’t know what’s going to happen or what someone else’s take is going to be on it or if you’re fighting against someone else’s vision. It’s easiest to have one port of call, to see an idea through, it would like doing a painting and getting someone to color it in, it’s better to do it all yourself.

AllMusic: It must be easier when you know exactly what you want it to sound like.

Hawkins: When we demoed the record, in the writing stage, I did pretty extensive demos, and it was pretty well understood how the record should sound. As far as production went, I could have happily stepped aside and let someone else do it if that’s what they wanted to do. It’s easier with the band, we have a relationship and I know how when we get stressed, it’s not like a journey of discovery.

AllMusic: "Open Fire" sounds like it has a pretty strong Cult influence.

Hawkins: Justin and I are huge Cult fans, there were two albums when we were growing up that we both really liked and were huge fans of, and one of them was the Cult, Electric, which was their more stripped-down, regrooving record. They’ve always been a big influence on us, but we’ve never really channeled it. I think one thing led to another on that track, and the intro riff sounded a bit Cult-ish so we decided to go for it, and the whole thing has a feel of it.

[Cult guitarist Billy Duffy] did that one-string thing, he took it and made it his own, playing a riff with one open string and doing the octaves and things, and when you’re brought up with the Cult, that’s a technique I adopted from listening and playing along to Cult records. What a great band, they don’t make them like that anymore.

AllMusic: Since you're also a band member, is it more dramatic when you have to make someone do a ton of takes on something?

Hawkins: I think when people get frustrated with themselves or a section, it doesn’t matter who’s in the chair. The guys know me so well that we can just get down to it to where we have a laugh, I can say, “That was atrocious,” and we can laugh about it. It’s not, “That was really great. Can we try one more?” It’s, “That was shit. Next!”

AllMusic: So you didn't read any psychology books to learn how to manipulate the rest of the band or anything.

Hawkins: No, I have produced a few albums in the past, and I always think from when I was a recording musician and my early experiences in the studio, and I’m much more relaxed now. But for any new musician, it’s terrifying when the red light goes on for the first time and you’re thinking, “Fuck, this is it.” It’s an indication of how good you are at your instrument or whatever. I go out of my way to make sure that all of the things that made me feel more comfortable are there while recording. And you’ve got to do it their way, it’s got to be as easy and as comfortable and as fun as possible, as well. You need to know what you’re doing so you’re not dicking around and getting a sound for way too long while the tension is building and building.

One thing is to not spend too much time on things, then you race through and do overdubs or whatever, you just knock them out and then look back. Just get them down, and have everyone take half an hour, then come back and have a listen, the whole thing, quite often people will find takes they’ll be happy with.

AllMusic: With the last record, there was the added pressure of it being the band's comeback. Now that that's out of the way, was this an easier session?

Hawkins: One hundred percent. There was a lot of pressure on the last one, and we were just getting to know each other again. I think you can really hear how uptight that record is now, and that works in its favor on a few occasions, but I think this one is more…I said to the guys before going onstage, this isn’t a race to the finish, let’s just go out there and peacock, enjoy it, try and get out without making any mistakes. We’re spreading our wings a bit on this record, and not worrying about it.

The last couple of albums, there’s been all this shit going on in the background, there’s been personal issues or drugs or booze or whatever, all this white noise going on, or a reformation or being on the brink of splitting up, there’s always something, where with this one, we pretty much fired everyone and then found the most remote island we could find that we could work on, and just got away from everything and did whatever we wanted to do, and tried to make a record we’d enjoy listening to.

AllMusic: Is it really obvious to you when you listen to certain songs that there's tension in the room?

Hawkins: Normally, that’s when the records are fantastic. Our second album, it sounds almost like a drum machine, how uptight everything is. I’m trying to think of an example where I’ve heard that in other people’s work, when they start taking less risks and the guitars aren’t quite loud enough. That’s when you know they’re under a lot of pressure. People mix vocals so fucking loud these days, it’s unbelievable. Forget the compression/loudness wars, it’s who can have their vocals the loudest. I want something where the vocal sticks in the track so you know you’re listening to a band and not a vocal performance with guitar and stuff behind it.

AllMusic: Although he doesn't play on the record, Roger Taylor's son Rufus now plays drums for the band. How did you cross paths?

Hawkins: We’ve been friends with Queen for some time, Brian May was a Darkness enthusiast from the early days, before we were signed, he’d come to shows, which was pretty cool. I’d never met Rufus before the day of his first gig with us. It happened a bit fast, really, but when it didn’t work out with Emily [Dolan Davies, former Darkness drummer], we had, in four or five days' time, a festival in London and we were supposed to play five tracks from the new album, and we had no drummer. When we were making the album, Brian May’s guitar tech said, “You should check out Rufus, no shit, he’s an amazing drummer, I wouldn’t suggest him if I didn’t think he would fit in really well.”

By that point, we’d finished the songs on the album. But he was the first person I thought of when Emily went, and so obviously, he as in fucking Australia at that point, on the other side of the world, so we had a conversation and we had a really good laugh on the phone. You could tell straight away he was perfect for the Darkness. I said that there was a space around the back of the Darkness that needs filling, and he said, “Good, that’s my specialty,” and that was it, I knew it was going to work. He came in from Australia and we were in the rehearsal room by 10 o’clock, and we were onstage at five in the afternoon. He just completely nailed it. He’s a great guy to be in a band with.