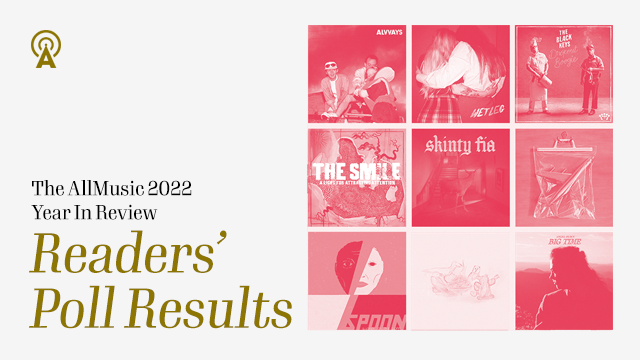 Our 2022 year-end coverage ends with the top 10 albums of the year as voted on by the AllMusic community. Respondents from all around the world made their choices, and we're excited to share the top 10 results as voted by you, the AllMusic reader. Thanks again for reading and supporting AllMusic in 2022, and we look forward to bringing you more reviews and feature stories throughout 2023.

"Songs drift into long, lonesome passages based around a single repeating motif only to combust in a caterwauling flare of ragged glory. The band seems to play as a single multi-armed unit, and yet Wood's tortured voice is at the very center of their palette. Black Country made a strong impression on their debut, but things become much more interesting with Ants from Up There." (Read the Review)

"The Imposters have never sounded better on record -- and they've never sounded more like the Attractions, either, which isn't entirely a coincidence -- and that helps give The Boy Named If its infectious kick: it may feel like an old-fashioned Elvis Costello album, but it sounds entirely fresh." (Read the Review)

"With components that span brittle acoustics, fuzzy rock textures, and swelling strings, it revisits some of the mournful alt-country that marked early albums like Half Way Home, at times with a stronger mid-century feel." (Read the Review)

"Dropout Boogie feels open and lively in a way the Black Keys haven't in a while. Maintaining the lean, efficient contours of Let's Rock -- once again, nearly all of the songs clock in well under four minutes -- the Black Keys jam a bunch of sounds and ideas into these tight spaces, finding fresh spins on their blues boogie, throwback soul, retro-pop, and arena psychedelia." (Read the Review)

"The songs are memorable and fun, the performances are inspired, and the production is varied and always interesting. The creation of Blue Rev may have been beset with trial and tribulation but the result is a heavenly indie pop hit guaranteed to make their already besotted fans fall even more head over heels in love with the band." (Read the Review)

"Skinty Fia may feature some of their most self-assured songwriting to date, but thematically this is a band seeking reconciliation between their Irish identity and their status in the U.K. music scene, a relationship fraught with inherent contradictory emotions." (Read the Review)

"Cut down from 45 to 20 songs and intended as a showcase for Adrianne Lenker's songwriting range as well as the band's continued growth as a unit, Dragon New Warm Mountain I Believe in You is paradoxically haphazard by design. That ultimately means it never sticks with a mood or even a sound palette for long, with sequencing seeming to play up contrasts and keep the ground moving under listeners' feet." (Read the Review)

"Lucifer on the Sofa has the satisfying impact, ebb, and flow of a great rock concert. It's a move that feels genuine; no matter how much they pare it down or polish it up, rock 'n' roll is at the heart of Spoon's music. For the first time in a while, the band's guitars are at the forefront" (Read the Review)

"Unlike many of their post-punk-influenced contemporaries, Teasdale and Chambers laugh at the world's absurdity (and their own) instead of despairing at it. That sense of humor is a powerful weapon in their hands, and they're most confident on Wet Leg when they're taking aim...While Chambers and Teasdale are still discovering what they can do, they're having a lot of fun finding out, and Wet Leg more than delivers on the promise of their viral beginnings." (Read the Review)

"There's something here for fans of any era, but as a reference for longtime devotees, A Light for Attracting Attention bests The Eraser as Yorke's finest non-Radiohead effort and falls somewhere amongst A Moon Shaped Pool and King of Limbs in terms of scope and daring. As such, diehards should be quite pleased with this release: an utterly satisfying set of songs that stands tall on its own, yet could easily climb the ranks against any of Radiohead's late-era efforts." (Read the Review)