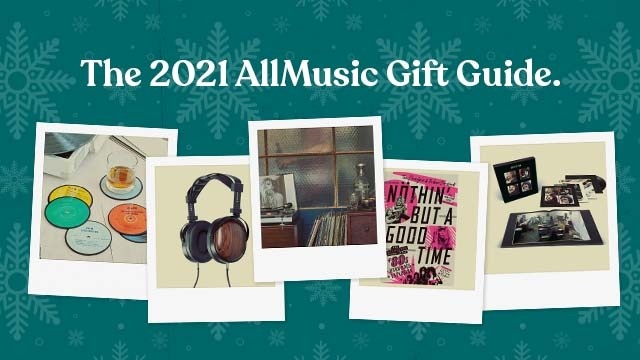 December's holidays are the time for giving, but we know finding the perfect gift can sometimes be a challenge. When it comes to the music lovers on your shopping list, the AllMusic Gift Guide has the goods. Each year, the AllMusic staff shares their hand-picked recommendations of books, accessories, gadgets, recordings and more, sure to please even the most discerning audiophile. And best of all, there's no waiting in line. Check out the AllMusic Gift Guide now! 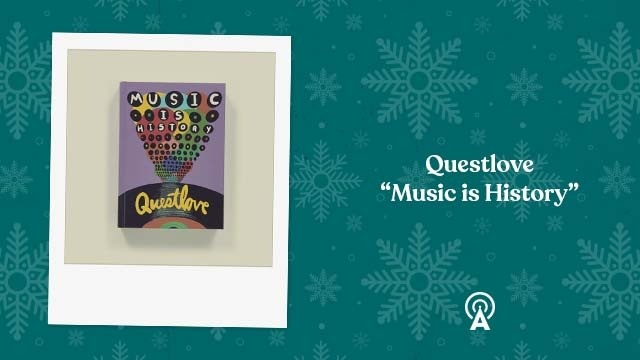 Music Is History by Questlove
Drummer, DJ, producer, member of The Roots, and bestselling author Ahmir "Questlove" Thompson offers a series of musings both personal and historical in "Music is History." The book digs deep into the past 50 years of popular music with a specific focus on black identity and how his love of pop culture has fed into his life's passions. ($25.49) 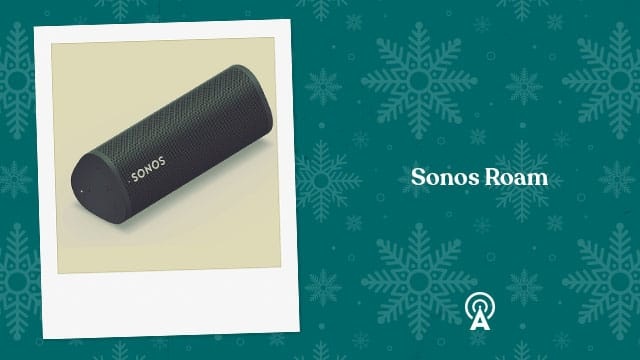 Sonos Roam
Roam is the newest addition to the Sonos lineup, and the first to offer Bluetooth connectivity for when you actually want to use it on-the-go. It also still supports Wi-Fi audio and works in within the larger Sonos ecosystem, so you'll have all your bases covered no matter where you are. (from $226.89) 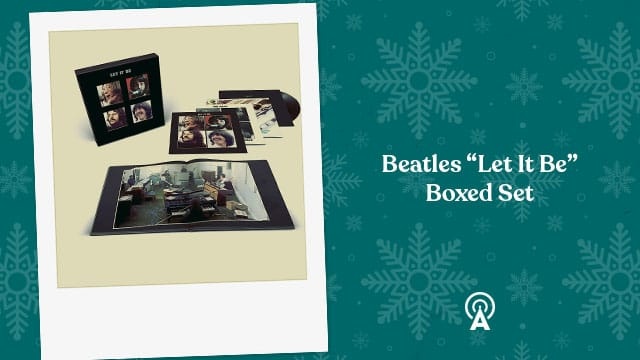 Let It Be Super Deluxe Vinyl ― The Beatles
The super deluxe edition of Let It Be contains a wealth of riches, chief among them the official release of Get Back, plus two discs of outtakes and a disc of remixes. Beatlemania returns yet again with Peter Jackson's The Beatles: Get Back -- a docuseries that revisits the original film footage shot by Michael Lindsay-Hogg in 1969, and this elaborate boxed set provides the soundtrack. ($125.03 on vinyl) 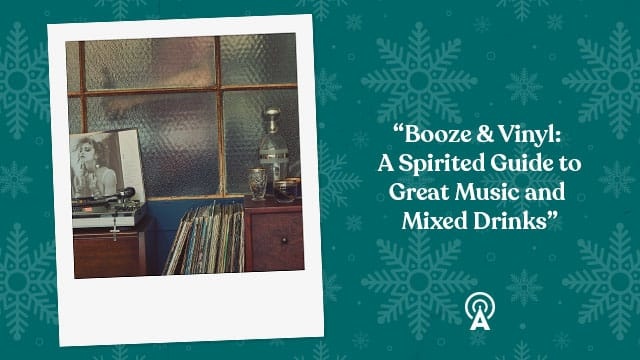 Booze & Vinyl: A Spirited Guide to Great Music and Mixed Drinks by André and Tenaya Darlington
This nostalgic vintage-looking publication is one-part record guide and one-part recipe book, pairing a classic listen with the perfect cocktail themed around the album. Low End Theory from A Tribe Called Quest is paired with a swanky Sidecar while The Rolling Stones' Sticky Fingers is served with a Jack & Coke (and Coors). Bottoms up! ($21.71) 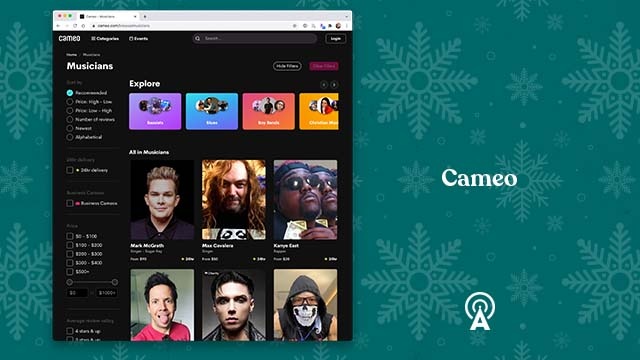 Cameo
Have you ever wanted Mark McGrath to wish your stepmom a Happy Kwanzaa? Or do you want Kid from Kid 'N Play to tell your little sister to be safe on her roadtrip? These wacky ideas used to be only a fantasy, but now with the power of the internet you can pay pretty much anybody you want to do anything faster than Smokey Robinson can say "CHA-NOOK-AH," whatever that is. (anywhere from $1 to $1,500 depending on how dope the person perceives themselves to be.) 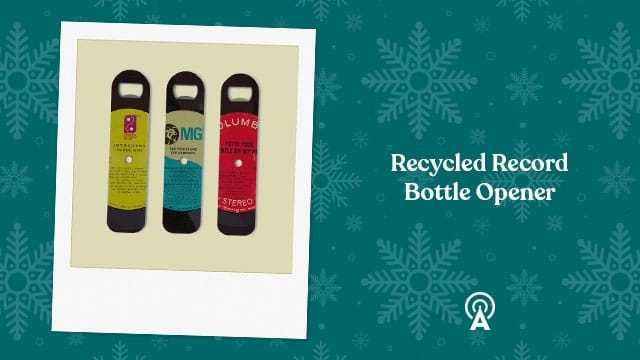 Recycled Record Bottle Opener
At a loss for that last minute gift idea? Need a stocking stuffer? Office white elephant gift? These cool bottle openers are cut from actual LP records and mounted onto a sturdy stainless steel base. ($12.00) 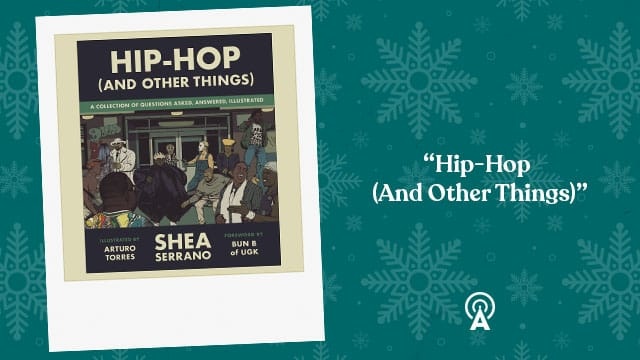 Hip-Hop (And Other Things) by Shea Serrano
Hilarious and irreverent staff writer for The Ringer, Shea Serrano, has written bestselling books on basketball and movies, and now turns his attention to his love for hip-hop in this series of essays. Illustrated with Arturo Torres’s beautiful streetwise artwork, Serrano sheds light on rap beefs, asks possibly unanswerable questions, and features more charts and graphs than a statistics textbook. ($20.07) 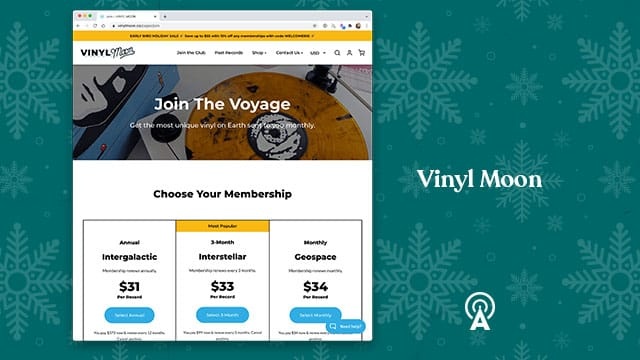 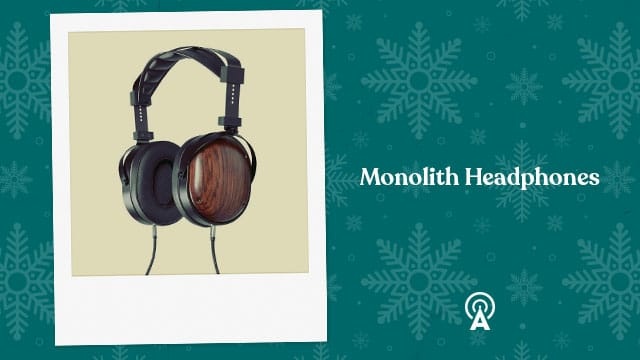 Monolith M565C Over Ear Planar Magnetic Headphones
These stylish classic-looking headphones have a closed back design to better isolate the music, and large comfy earpads that go over the ear. Aside from looking sharp, Monolith has redesigned and reengineered the planar driver to be better than the planar driver that was in there before (thank goodness!). ($169.99) 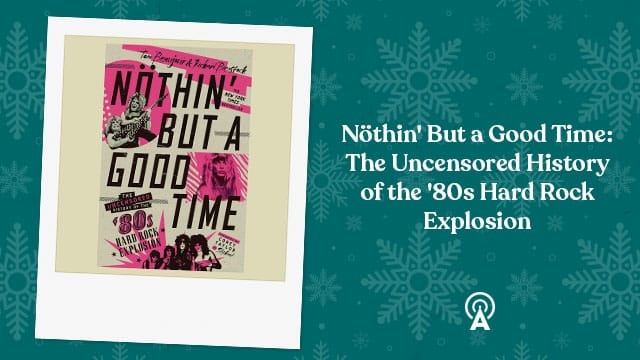 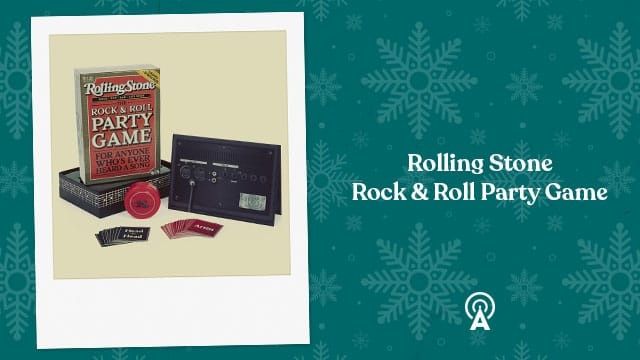 Rolling Stone, The Music Trivia Game Where Legends Are Made
This trivia game pairs two teams against each other to answer quick-fire questions and even sing, hum or describe songs related to the questions at hand. The game highlights over 150 well-known artists from the '60s to today, so every player should be able find genres and eras to be an expert in. ($19.99) 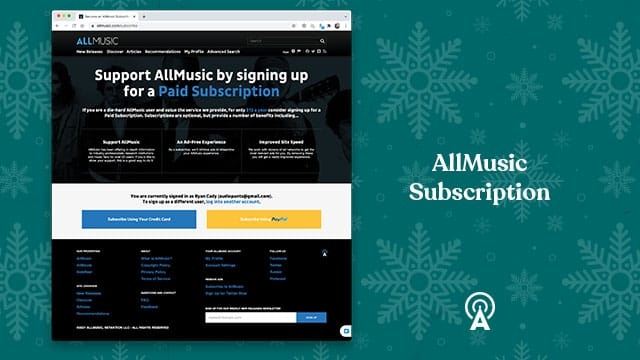 AllMusic Subscription
If you're reading this, you're likely already a regular AllMusic reader. AllMusic has always been a free resource, but it's not free to maintain. If you'd like to help directly beyond loaning us your eyeballs and time, you can chip in for an annual subscription to AllMusic. In turn, we'll remove advertisements for you, making it easier to zip around the site. ($12.00) 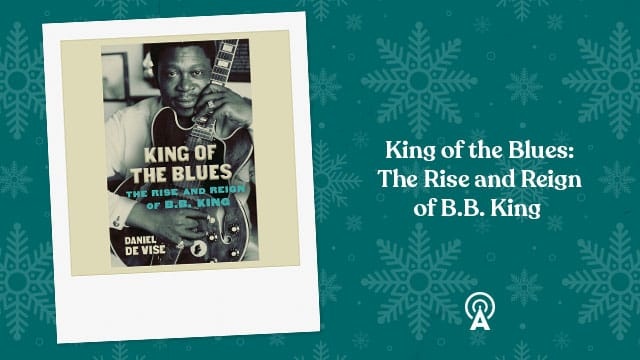 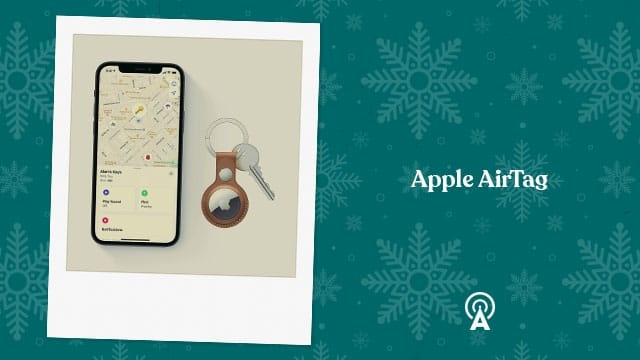 Apple AirTag
Lost your keys? Can't find your backpack? Where is that confounded dog?!? If you're deep into the Apple ecosystem, AirTags will help you remember wherever you thoughtlessly left your stuff. ($29.00) 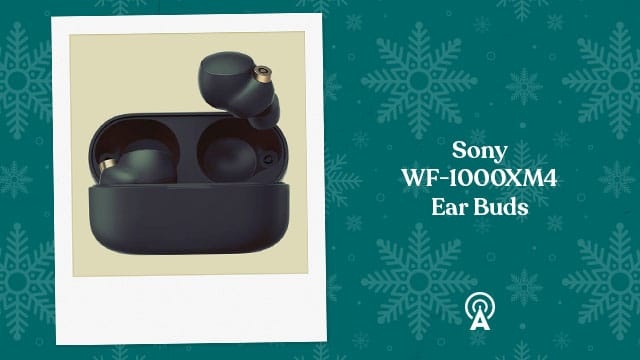 Sony WF-1000XM4 Ear Buds
The Sony WF-1000XM4 may not have a name that is as easy to remember as the equivalent wireless ear buds made by their fruit computer rival, but there are lots of good reasons to recommend them. With amazing sound quality, critically acclaimed noise cancellation, long battery life and the ability to pair to a variety of devices, you really can't beat them. ($248.00) 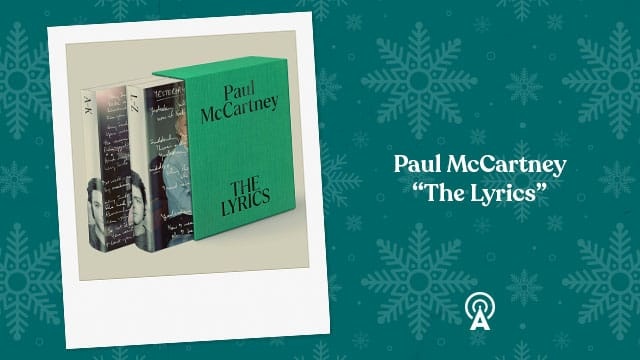 The Lyrics: 1956 to the Present by Paul McCartney
You may not have heard of him, but Paul McCartney was in a band called The Beatles, as well as being in a group called Wings and (if that isn't enough) has enjoyed a long solo career as well. This two-volume set beautifully illustrates over 150 lyrics and the stories behind the songs that have become standards here, there and everywhere, even including (relatively) lesser-known songs like "Eat at Home" and "Temporary Secretary." ($98.99) 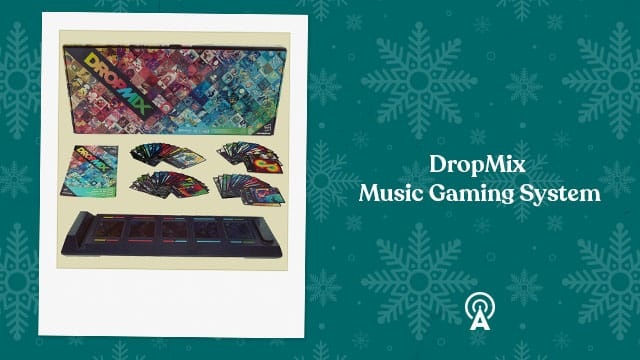 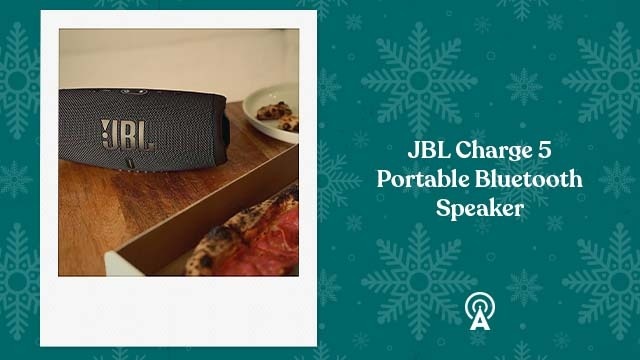 JBL Charge 5 - Portable Bluetooth Speaker
JBL makes this solid and rugged 40-watt portable bluetooth speaker that connects easily and stays charged (even allowing you to charge other mobile devices directly from it). The cool benefit of this particular unit is the ability to pair multiple speakers together to use in stereo or across multiple rooms in mono "Party Mode" via the free JBL Portable app. ($179.95) 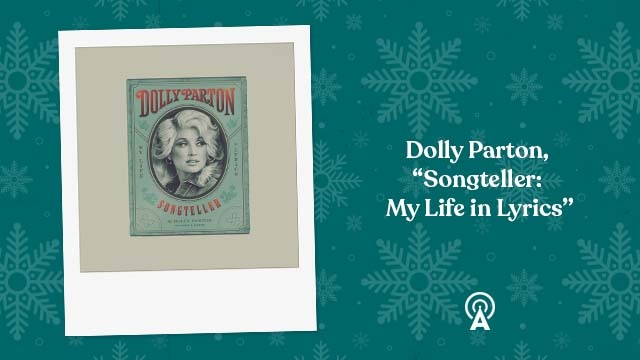 Dolly Parton, Songteller: My Life in Lyrics by Dolly Parton
The coffee table book of the year, this weighty tome is filled to overflowing with personal anecdotes, terrific photos and behind-the-music revelations about Dolly's life, loves, regrets and victories. The book contains lyrics to 175 of her best-loved songs—along with the personal memories and the inspiration behind them. ($30.57) 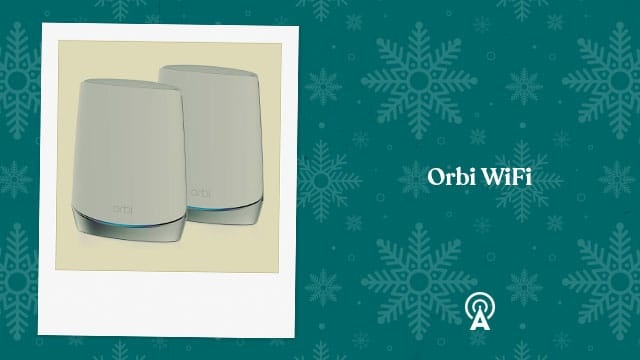 NETGEAR Orbi Whole Home Tri-band Mesh WiFi 6 System
As so many of us ended up working from home over the past year, our dusty routers were overtaxed with online meetings, virtual school, increases in streaming videos and music. End frustration on multiple levels by hooking up the Orbi WiFi system. With the main unit on one floor and the satellite unit upstairs in the office, everybody gets online with a minimum of screaming and throwing things out the window. ($329.99) 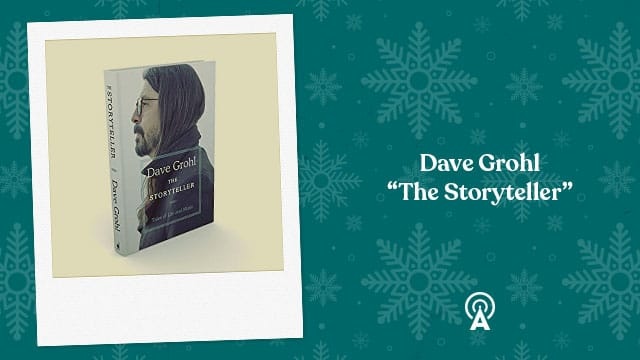 Dave Grohl: The Storyteller by Dave Grohl
If you've seen any music documentary in the past two decades, you've heard a Dave Grohl story. Now the man himself tells his tales from touring as an 18-year-old, to recording with Nirvana, to reading bedtime stories with Joan Jett, to meeting Sir Paul McCartney. We all have long recognized Grohl as a raconteur and now someone on your holiday list can experience him as an author. ($18.40) 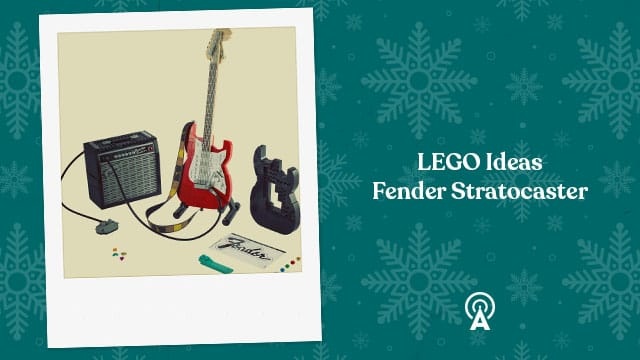 LEGO Ideas Fender Stratocaster
This incredibly detailed LEGO set allows kids of all ages to build their dream guitar (in red or black) and put together a replica a ‘65 Princeton Reverb amplifier. The strings are individually strung, the whammy bar actually whammies, and the panels on the amp come off for view of the motherboard, reverb tank and speaker. ($99.99) 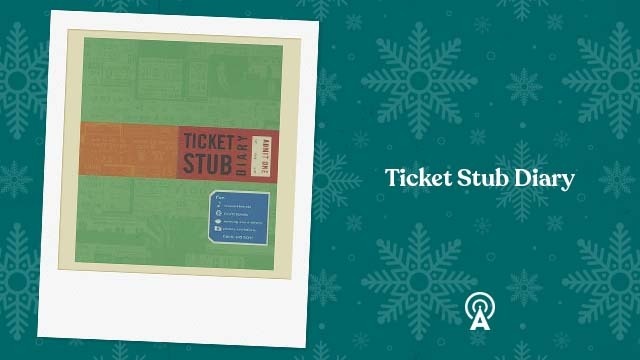 Ticket Stub Diary
Holy moly it genuinely feels like the world is opening up again and bands are starting to tour for real. This ticket stub diary is way better than that dusty shoebox you have under your bed. Lay out the ticket stubs into this journal and jot down notes about the setlist, who you went with, and how long the encore was. Much nicer than an Excel spreadsheet. ($14.19) 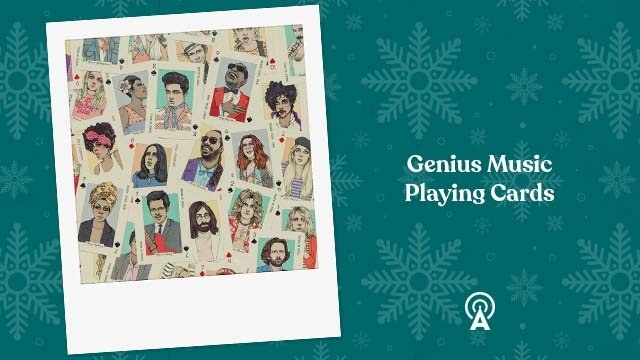 Music Genius Playing Cards
This stocking-stuffer highlights some of the most creative and influential artists across music. While at its core, it is just a deck of playing cards, the subdivisions of the musicians by genres (Pop artists are represented as Hearts, Rock 'n' Roll is Spades, Folk & Country are Diamonds, and Soul, Blues & R&B are Clubs) are a clever twist, and the original artwork captures the essence of the subject (cleverly placing David Bowie and Björk as the joker cards). ($9.89) 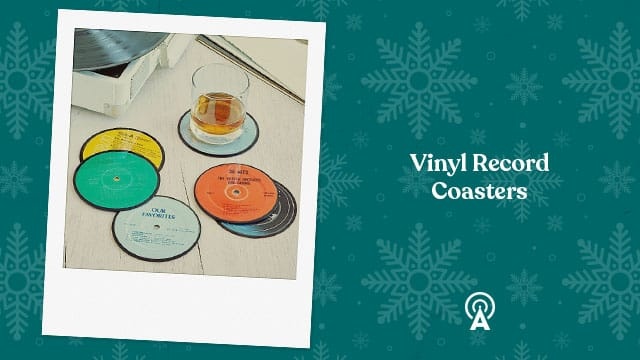 Vinyl Record Coasters
Made of labels cut from the center of actual vinyl records, these hi-fi home furnishings will be a hit with any music lover. The discs are sealed so moisture won't seep through to the surface. ($18.00) 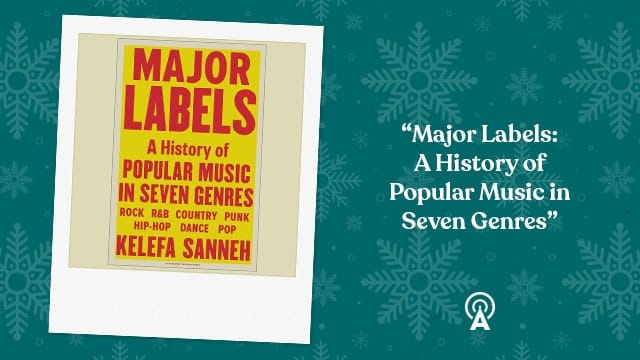 Major Labels: A History of Popular Music in Seven Genres by Kelefa Sanneh
This book takes an unconventional approach by looking at the history of popular music over the past fifty years as seen through the big genres that have defined and dominated it: rock, R&B, country, punk, hip-hop, dance music, and pop. ($24.99)