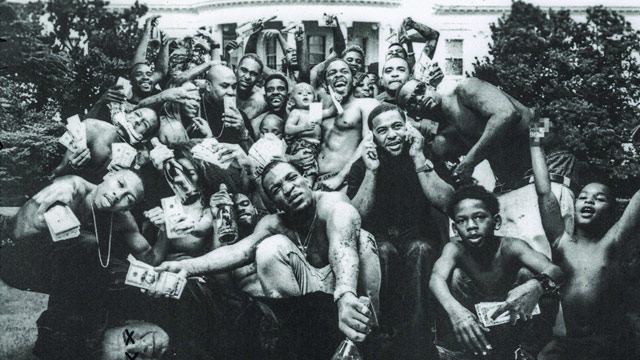 Becoming an adult ultimately means accepting one's imperfections, unimportance, and mortality, but that doesn't mean we stop striving for the ideal, a search that's so at the center of our very being that our greatest works of art celebrate it, and often amplify it. Anguish and despair rightfully earn more Grammys, Emmys, Tonys, and Pulitzer Prizes than sweetness and light ever do, but West Coast rapper Kendrick Lamar is already on elevated masterwork number two, so expect his version of the sobering truth to sound like a party at points. He's aware, as Bilal sings here, that "Shit don't change till you get up and wash your ass," and don't it feel good?

The sentiment is universal, but the viewpoint on his second LP is inner-city and African-American, as radio regulars like the Isley Brothers (sampled to perfection during the key track "I"), George Clinton (who helps make "Wesley's Theory" a cross between "Atomic Dog" and Dante's Inferno), and Dr. Dre (who literally phones his appearance in) put the listener in Lamar's era of Compton, just as well as Lou Reed took us to New York and Brecht took us to Weimar Republic Berlin. These G-funky moments are incredibly seductive, which helps usher the listener through the album's 80-minute run time, plus its constant mutating (Pharrell productions, spoken word, soul power anthems, and sound collages all fly by, with few tracks ending as they began), much of it influenced, and sometimes assisted by, producer Flying Lotus and his frequent collaborator Thundercat.

"u" sounds like an MP3 collection deteriorating, while the broken beat of the brilliant "Momma" will challenge the listener's balance, and yet, Lamar is such a prodigiously talented and seductive artist, his wit, wisdom, and wordplay knock all these stray molecules into place. Survivor's guilt, realizing one's destiny, and a Snoop Dogg performance of Doggystyle caliber are woven among it all; plus, highlights offer that Parliament-Funkadelic-styled subversion, as "The Blacker the Berry" ("The sweeter the juice") offers revolutionary slogans and dips for the hip. Free your mind, and your ass will follow, and at the end of this beautiful black berry, there's a miraculous "talk" between Kendrick and the legendary 2Pac, as the brutalist trailblazer mentors this profound populist. To Pimp a Butterfly is as dark, intense, complicated, and violent as Picasso's Guernica, and should hold the same importance for its genre and the same beauty for its intended audience.