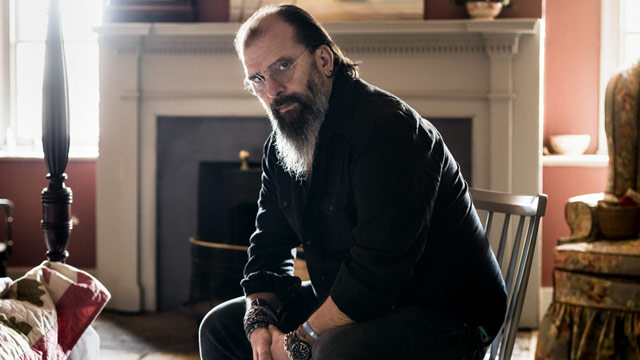 Steve Earle doesn't take many breaks. His musical output averages an album every 18 months, while he also writes songs for other artists and TV, and tours extensively on records both new and old, including last year's Guitar Town 30th anniversary tour. He is also an actor, author, and an outspoken activist on behalf of many causes. He admits he's a bit overwhelmed. Some of that breakneck pace is necessary to "pay my fuckin' alimony," while the rest can be chalked up to a creative spirit that only seems to grow with age.

He doesn't take many breaks when he speaks, either; when it comes to a conversation, wind him up and get out of the way. When we spoke with Earle before today's release of So You Wannabe an Outlaw, his most overtly country album in nearly 20 years, he was primed and ready to expound on the disconnect between country musicians and their audiences, how he manages to write while he's exercising at the gym, and why women rule country music in 2017. And he's already thinking ahead to his next two albums.

AllMusic: You went into the studio for this album immediately after the Guitar Town anniversary tour ended. Do you usually record when you're fresh from the road?

Steve Earle: It’s not all that great for your throat, but it’s great for the band. December is cedar season there in Austin, and you have to fight that allergy. I’m not classically allergic, but I have some COPD because I smoked 10 years too long, so all the stuff that causes hay fever causes my chest to close up, and my voice is more chest voice than you’d think, so I really struggle with singing. The Low Highway was recorded in May, and I had to re-sing over half the record a little bit later, and I almost never do that. The vocals on this record are all live, except for one song I re-sang because I found a new approach to it when we were mixing. We try to make it as live of a record as we possibly can, we overdub very little.

The last several records, I didn’t have the advantage of playing any of it on the road, so I really wanted to do it this time. We knew we were going to record in December, and a lot of the songs were written in advance, because I’d written three albums at once: the last part of the blues record, the Colvin & Earle record, and this record. The way it works is that the blues record got the blues songs, the things that were more poppy or folky and lent themselves to harmony went into the pile for Shawn and I to finish, and I started writing these songs because T-Bone Burnett asked me to write a song for the first season of Nashville, then the next season, Buddy Miller took over and called me, so I wrote another song that they didn’t end up using, so all of the sudden I had two country songs. They were very much influenced by the fact that I’d been listening to Honky Tonk Heroes a lot.

AllMusic: Do you feel like you have to record songs within a certain window after writing them?

Earle: I don’t think good songs get stale, that just means you shouldn’t have recorded it in the first place. I don’t get the luxury of sitting on songs for very long. The way the record business is now, I have to make a record every 18 months or so, just so I can tour again and pay my fuckin’ alimony. I write when I need to write; at some point I get the idea of the shape or the concept of a record and I forge on from there. I’m always looking for a reason to write a record and make a song. I like being asked to write songs for specific things, because it means I know what I’m going to do the next day.

I’m a little overwhelmed, I take on too much stuff, but the truth is, this job, nobody makes you punch a clock, and as you get older, you start to coagulate. I’m more active physically than I’ve ever been, and artistically and intellectually, because I have to. I started yoga when I was 61, and it’s survival. I was looking for a way to make myself meditate every day, and so I both go to the gym and meditate, which is a few hours of every day that I probably could be writing. I think it helps keep all that going.

AllMusic: Do you listen to music while you exercise?

Earle: I listen to the stuff in the gym sometimes. I tend to watch more television in the gym if I’m just doing something recreationally. I’ll write in the gym, I do it all the time. I’m working on a song now that I’ve been asked to write for somebody else, and I was trying to watch a Harry Potter movie and ended up turning on the Notes program on my phone and worked on a song for most of the hour I was in there.

AllMusic: That focus on fitness probably helped when you were out there playing 30 songs a night on the Guitar Town tour.

Earle: I come from the eighties, we were all trying to outdo Bruce Springsteen, I used to do three hours without an intermission in 1988. The joke was that Bruce is a pussy, he takes an intermission. That was the standard, he was the performer. He’s the greatest at connecting with an audience that rock and roll ever produced. He turned arenas into coffeehouses, and that’s what I learned from him, was when I saw him do that, that’s why I wrote Guitar Town, the Born in the USA tour focused things for me to be able to write that album when I was 31 and suddenly have a career.

AllMusic: I like the way the tempo mutates on "Firebreak Line," you can tell there's no click track happening there.

Earle: The only time I ever recorded with a click track was Washington Square Serenade, because I had to. We recorded it to beats, and live drums were added later. Tempos often shift in what I do, but that song is about Johnny Cash records, and put a metronome on one of his records sometime, see what you come up with.

AllMusic: When Willie Nelson sings "Listen up, kid" on the title track, is that aimed more at the listener or at you?

Earle: I wrote that verse for him to sing and he’s talking to me. The whole song is talking to people that think they know. It’s a very thin line you walk when you feel sorry for yourself because you’re riding around on a bus that costs more than someone’s house, but if you do it in a way that somebody else can empathize with, it’s cool. It was cool when the right people did it, but when David Allan Coe got a hold of it, it became “Waylon, Willie and Me,” which is just David dropping names, because that’s what David does. Back in the eighties, a writer was talking to someone coming off an oil rig, and the guy said, “Country singers used to sing about us, now they just sing about each other.” “Guitar Town” was kind of skating close to that, the song, but the rest of the record was about people, so I got away with it, and that’s what you have to do.

Every record I’ve made has a sort of “state of me” song on it. “I Feel All Right,” “Guitar Town,” “The Other Kind,” most of them have one. Copperhead was constructed to be my post-Vietnam record, so that runs through the whole thing. This record is basically a statement about where I come from musically, and it’s unapologetically fashioned after Honky Tonk Heroes, just like Transcendental Blues is fashioned after Revolver and Rubber Soul.

I don’t really have any original ideas, and don’t claim to, I just write pretty good words, and I’ve learned to be a pretty good singer and guitar player over the years. This record, I’m really proud of the level of the writing, a lot of people will say, “Why didn’t you just do this after Guitar Town?” I needed to do everything between then and now to be able to make this record as good as it is, and I think it holds up on the songs themselves, and people will wince because it’s my least political record I’ve ever made. We recorded in December, the election had just happened, and I’d written it already, I had plans for it, I had a sequence before I recorded it, and I considered changing directions and adding and dropping songs, but I decided, no, I’ve arrived at this place, I have the best band I’ve ever had, this is the countriest thing I’ve done.

Most country nowadays, country by men, is hip-hop for people that are afraid of black people. But the best stuff going on in Nashville is being made by women, I really and truly believe. There are singer-songwriters on country radio, and they’re pretty good, but they’re all women. Miranda Lambert’s last record is fucking great, and it’s just one of those things. The next record will probably be just as country as this one, but way more political, you can pretty much count on that. What I’m thinking about now is a record of Guy Clark songs, and that’s going to happen. I’ll probably do something else first, then do the Guy record. I’ll probably do a very country, very political record next.