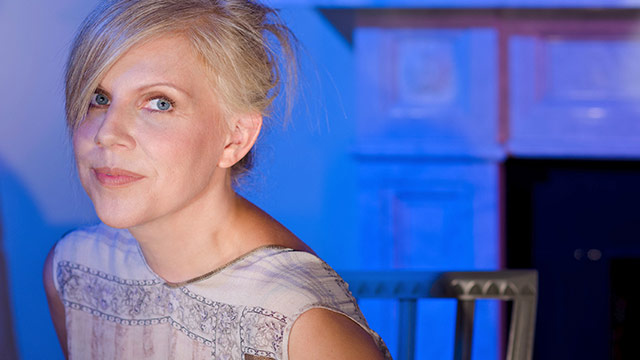 Tanya Donelly may be hitting the road this summer with the reunited Belly, but in recent years she's kept herself busy with the Swan Song series of EPs, which she's winding down with a three-disc collection, featuring seven new tracks. One of them, "Send Me Your Next Nightmare," is a collaboration with her Belly bandmate Tom Gorman, and you can hear it here first before the collection comes out May 20. We talked with Donelly about how the track came together, what's ahead for Belly and how she's done releasing music under her own name.

AllMusic: How far into this most recent batch of songs did you come up with "Send Me Your Next Nightmare"?

Tanya Donelly: It’s probably the newest one of all, we just finished it up in time to get it on there. I approached Tom, because I did a song with Gail, also from Belly, and so I said, “I should reach out to Tom and see if he has anything kicking around,” and so he sent me that and another song, and they were completely finished maybe a week or so before we started mastering. It was a very quick turnaround. “Send Me Your Next Nightmare,” I sat down with the music and it came out in a very straight and clear way. The first time I sat down to sing it, I had exactly the melody and most of the words that you hear now, which is a very rare event in my life.

AllMusic: And was this the first time you'd done anything with Tom in 20 years?

Donelly: Yeah, it’s so funny. It was like slipping right back into something. When you work with somebody that intensely for that long, you develop this symbiotic relationship with them, and I plugged right back into that – happily, unsurprisingly.

AllMusic: There's a lot going on with this song, there are a lot of layers.

Donelly: That’s all Tom, he sent me the whole thing. It’s different than the way we usually work, and with Belly, everyone’s going to be contributing their own parts to the new stuff, but for this, he sent me the entire track as is. And there are several examples of that on Swan Song, where it’s just like, “Here’s the track!”

AllMusic: So you were never actually in the same room while making this song. Is that the modern way now?

Donelly: It’s not the way we want to do the new stuff that we’re going to be doing, the handful of songs that we’re going to be doing with Belly. But the Swan Song series is a completely different kind of project, every single song on there has a completely different process. Most things were done in-studio with people face to face, and there are a few examples where people just sent me tracks.

AllMusic: The Swan Song EPs are based around collaborations. Were you always good at sharing creativity or did you have to learn how?

Donelly: I always, always was interested in collaborating. Even music that has my name stamped on it is collaborative, to a certain extent. When I play with somebody, I’m playing with them because I trust them and I like what they do and I want them to do that thing they do. I’ve always loved other people’s contributions, it’s really important to me.

AllMusic: Do you make up for that unselfishness elsewhere in your life? What are you less easygoing about?

Donelly: With my children, I don’t helicopter or whatever, but I am extremely involved with them in a very hyper-maternal way. I’m making it sound unhealthy, it’s not, I have a great relationship with them, but I don’t want a lot of external input on how I parent.

AllMusic: Are they finally going to get to see Belly this summer?

Donelly: Yeah, I’m really excited, and they’re excited, too, it’s something they never thought they were going to see, and it was quite possible that they might not have, so they’re very excited about it.

AllMusic: Now that the EPs have been combined into one body of work, what's your impression of them?

Donelly: It gave me some confidence in my flexibility as a writer, that someone can send me an electronica track and I can do that and enjoy it, or something very stark and sparse, and I can work with that and enjoy it. I’m proud of the fact that I could write to almost anything that came my way, so that was exciting.

Donelly: There were a couple of things, and it’s not really like, “I don’t like this, this isn’t my style,” it was more that nothing came to me, I just sat there and listened and it didn’t come. That happened a couple of times, so there were some fails.

AllMusic: Is releasing the collection like putting a bow on these songs and moving on?

Donelly: Yeah, it’s done. As soon as it was mastered, it was done. From this point on, I’m sick of seeing my name, so I’ll do projects that are pseudonymously named, that’s just more interesting to me. I just feel like the intention of this was to make a sort of wishlist of people I wanted to write with and play with and then call it a day on branding it with my particular birth name. After the Belly thing, I have another project that’s going to start up, and that will have a name that’s not mine.

AllMusic: How are you preparing for the summer?

Donelly: We want to practice a lot to make sure that we’re good for these shows, we haven’t played together in so long. I did sit down and start learning the old stuff, and it came back to me pretty quickly, but until we’re all in a room together, it’s hard to know how that goes. So we do want to practice quite a bit so that it’s good when it happens. There’s a lot of people excited about it, and I want that to be justified. We’re going to start practicing at the end of May.

AllMusic: You mentioned new music, will we hear any of that at these shows?

Donelly: That’s for far in the future, that’s not starting until 2017.

Donelly: It totally seems weird to me. Planning things far in the future in terms of music seems odd to me, but myself and everyone that I work with, we have jobs and families, so that’s how it goes.

AllMusic: Would you have planned ahead that far back in the 90s?

Donelly: It was more like we'd take things as they'd come. I remember being on tour, and they’d say, “We’re adding two weeks to the end!” and you never really knew when the tour was going to end back then, and that just seems impossible now. We’re doing this entire venture DIY and we’ve split up the jobs, and I’ve been doing all the tour managing, and it’s a lot of work. I have renewed respect for people who make all that possible.

'Swan Song Series' can be pre-ordered via American Laundromat Records