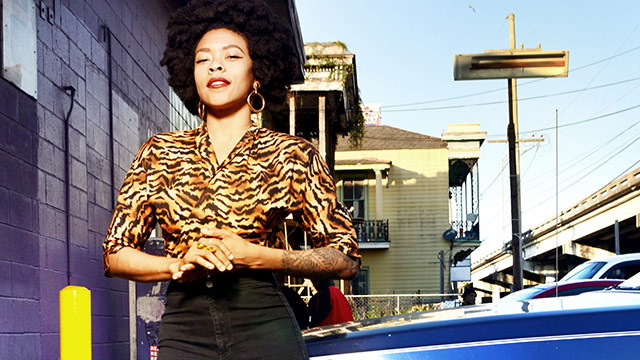 ​New Orleans-based singer Nikki Hill delivers an impassioned performance on the title track from her upcoming album, Heavy Hearts, Hard Fists. She's already out on the road ahead of the album's release on October 16, delivering her variety of fiery soul and R&B with some rock and roll swagger thrown in for good measure.

"'Heavy Hearts, Hard Fists' is a simple recount of a bad past relationship," Hill wrote of the title track. "One of those where you know it's no good, but you stay because you don't have the strength to change, although the reasoning never comes out that way when it's happening. The song is me finding that point where I was finally seeing through blind love, realizing that I didn't want to be there, and that I could move on. Musically, I wanted to do something with that storyline, but still with a solid groove. It ends up coming out very danceable. I think it adds a really great contrast, and honestly, it feels like I'm shaking off those bad memories even more when I'm just digging into the beat!”