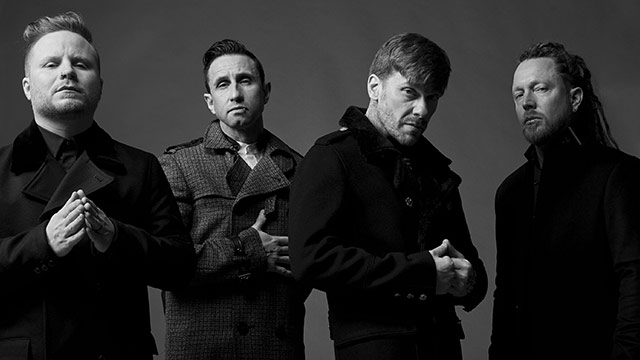 When the Floridian hard rock band Shinedown began putting together its sixth album, frontman Brent Smith found himself put off by the increasingly impersonal nature of modern interactions, our growing ambivalence towards our fellow humans, and the growing noise we subject ourselves to via technology that's meant to connect us but often ends up doing the opposite. Smith and his bandmates channeled these concerns into ATTENTION ATTENTION, a concept album about working through the ugliness and coming out stronger on the other side.

While en route to the band's first show in support of the album, Smith spoke with AllMusic about the ideas behind a few of the album's key tracks, the high-level support he received for his brief sojourn into rapping, and the pre-show tradition the band has carried on since its early days.

AllMusic: With the album telling a story, were you especially concerned with how the closing track would tie things up?

Brent Smith: The song was actually written pretty early on, and from the moment it was written, I instinctively felt that it was going to be the finale of the record. I’d taken a bit of time to think about the fact that the last three records ended with ballads or a release at the end, I just wanted to make sure the finale was epic, it had to be very cinematic, and it had to be a different kind of release. The individual the story is about and what they’re going through, this is the moment they enter back into the world. At the beginning of the record, they walk into a room, sit down, take a deep breath, and then it starts. The finale of the album, this is them opening that door again and returning back into the world.

AllMusic: "special" is quite intense lyrically ("I'm not trying to rain on your parade/But you're not special"), who is the narrator of that song? Is it the protagonist, or someone directing the words at them?

Smith: “special” happens right at the turning point of the main character, when they start to get their confidence back. “special” is a song about not forgetting your humanity, it’s a bit of a warning to everybody to not lose the fact that you’re a human being. Have a conversation in front of someone without looking down at your phone and typing everything out; be in front of another person and sharing your feelings with them. That song is about making sure, even with all these advances we have in the world, don’t lose the fact that we’re all human beings and sometimes we need to be asked that we’re OK.

AllMusic: You do a bit of rapping on the title track, what were the reactions to that?

Smith: I knew exactly what I was doing on that song, and I knew it was interesting. I just needed to do that on the verses, I wanted to make sure that I was able to put those lyrics out there, because I already had the idea about the chorus and what that was going to be. When [Atlantic Records chairman and COO] Julie Greenwald got the record, she sent me an email that said, “I love the line ‘If you’re a shiny new penny, I’m a hundred dollar bill,’” and then, in all caps, “Spit that shit, son!” So if I’m getting credit from Julie Greenwald, I’m doing all right.

AllMusic: In your own listening, do you tend to gravitate towards albums that tell stories or carry large themes?

Smith: For whatever reason, I always go back to Soundgarden’s Superunknown. I’d never heard a record that had the pacing that that album did. I don’t think it’s a concept record or anything, but a lot of the lyrical content, the style in which he sung every song and allowed every song to have its own emotion...sometimes you’ll listen to a record that has two really good songs and then some carbon copies, like it wasn’t thought through. That was the first time I heard a record that sounded every single moment of the day, they were conscious about it all making sense, making sure every song was given as much attention as it needed, so that was really inspiring.

AllMusic: Do you have a favorite Superunknown deep cut?

Smith: The two that really stick out for me is, just because of the mood and the tone that it sets, is “4th of July,” and the other is “Limo Wreck,” because of that last chorus and how his voice, it sounds like he’s coming to come through the speaker and grab you. That’s probably my favorite deep cut, is “Limo Wreck,” because you don’t think he can get any stronger, and then that last chorus, he’s just a monster.

AllMusic: Would you always listen to albums all the way through?

Smith: I always listened from front to back. That’s another reason we were very specific about ATTENTION ATTENTION and the way that it flows, because it is an album. Of course people will have their favorites, but we did intend for the audience to experience the album as an album. They’re supposed to take you on a ride, and that’s what I love, is the roller coaster.

AllMusic: Years ago I participated in your pre-show ritual backstage, but my recollection is somewhat foggy. Could you refresh my memory?

Smith: We’re still doing it. What you do is if you’re in the room with the band an hour out before we walk onstage, you get a beer, a shot, a soda, whatever, and you get in a circle with everybody, put your drink in the middle of the circle, put your hand out, and Barry [Kerch, drummer] counts 3-2-1 and everyone takes a big, deep breath and you scream as loud as you possibly can, “doo, doo, doo” until you see stars. We’ve done with the four of us, with just one extra person, or one with almost 60 people. The only other rule is you have to finish your drink and look at everybody in the eye.

AllMusic: Has anyone especially amusing ever joined in?

Smith: We were in Massachusetts, and we were doing a private birthday party for someone who owned a bunch of car dealerships. It turned out to be a huge event, and Gronk was there, from the Patriots, so he did it with us, which was pretty rad to watch.

AllMusic: You toured with Iron Maiden in Europe last summer. Was it inspiring or maybe even intimidating to see the scale of their operation?

Smith: It’s definitely a machine that’s put together in a specific way, but those guys onstage have never lost the love of what they do. They’re older, and they don’t stop moving the entire show, which is like two hours and 15 minutes long. It’s just pure adrenaline. I’ve never seen a fan base like that, where it’s just the only thing that matters when Maiden is in your city, in your country, is Maiden. Wherever you are, no matter what city or country we were in, it felt like the entire city was there. It’s a legendary legacy, and we’re always keeping our eyes open for whenever we can be taught something.

We got that tour because of Steve Harris, he saw us at Download in 2016 and a couple of days later he said, “Would you want to open for our UK tour in 2017?” and we were like, “Are you kidding? Absolutely.” They brought us over and gave us 50 minutes a night and let us bring our own hammer down. We did two shows at the O2 in London, and they’d put us in front of almost a million people in 44 days. If you look at Download this year, we’re on Sunday, and the last three band are us, Marilyn Manson and then Ozzy, and I know for a fact that Maiden had something to do with that position.

Smith: I think that’s 100 percent theirs, it’s pretty authentic. We won’t have any monsters onstage.

Charley Crockett Talks 'Welcome to Hard Times,' the Album No One Else Would …

Creed Bratton Wants to Heal You

Charley Crockett Talks 'Welcome to Hard Times,' the Album No One Else Would …

Creed Bratton Wants to Heal You