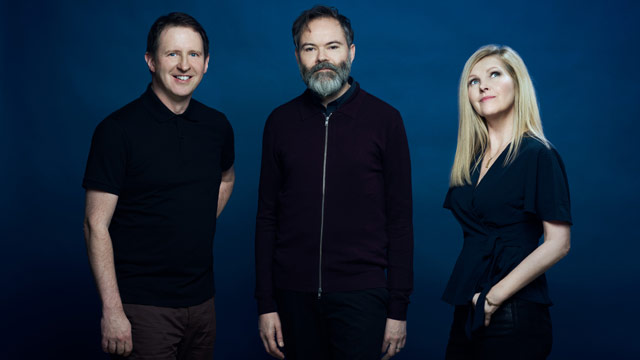 Last week, eclectic English indie-pop trio Saint Etienne marked the 25th anniversary of the band's debut with, fittingly, another album, the band's ninth. Home Counties is partly a thematic study of the environs in which the band's members spent their formative years (the title referring to London's surrounding areas), partly a tour through the band's discography of diverse sounds. In his four-star review, editor Tim Sendra called it the band's "most varied-sounding" and "most emotionally affecting" album.

The eve of the album's release, we spoke with vocalist Sarah Cracknell, herself somewhat fresh off of the 2015 release of her solo album Red Kite, which ended up influencing the new Saint Etienne record. She shared some insight into the swift creation of Home Counties, the experience of flashing back to her youth, and how 25 years have flown by.

AllMusic: Does the release day itself still feel like a big deal to you?

Sarah Cracknell: It still feels like a big day, and it’s exciting to know what people think, so that’s always good. We look at responses on our Facebook and Twitter and everything, and we’ve already had some really good reviews, so we’re quite happy about that. We were in Barcelona the other day, and we’ve done some warm-up shows before that, and we set off on tour after that, so I’m a bit tired already, but it’s good fun.

AllMusic: Bob [Stanley, Saint Etienne keyboardist and songwriter] has said that the album came together especially quickly. Is that your assessment, as well?

Cracknell: We were just talking about it yesterday, and trying to verify if it’s the fastest we’ve ever put an album together, and it is, it’s official, it’s the fastest. It was literally weeks, which is interesting, because you can spend ages going over things, and sometimes it’s not necessary. We worked with Shawn Lee, and he made it very fast and doable. He was a great translator of our ideas, and his studio was set up perfectly for us with old analog keyboards and outboard stuff, so we were in good hands with him.

AllMusic: "Dive" and "Take It All In" were brought in by you, pretty much already completed.

Cracknell: I’d done those with a guy I worked a lot with on my solo album, Carwyn Ellis, and those trickled down from my solo record, where I just kept working with a few people that I’d worked with on that, and he was one of them. I played those songs to Bob and Pete [Wiggs], and they really liked them. I did those in the same studio with Shawn Lee, so it seemed like a good fit, and they liked the sound, so it all worked out good.

AllMusic: And the guys are OK with that, they don't feel left out?

Cracknell: No, we have no ego clashes in our band. We’re all equally happy to take back seats on a couple of tracks or to be the person that instigates them, it’s completely fine either way, we’re not bothered either way.

AllMusic: "Dive" has more of a disco feel, what was the seed of that track?

Cracknell: It’s a bit disco and it’s also a bit Latin, isn’t it? I was trying to come up with a really good summer song, and I was talking to Carwyn about it and we wrote some stuff, and it just turned out like that. I love doing it live, it’s great, it’s a good, rousing live song.

AllMusic: "What Kind of World" goes in a number of directions, what was the original seed for that song?

Cracknell: Bob or Pete came in with a basic backing track, and we started working on it, and some of the lyrics, but not all of them, with the political climate of both of our countries, it’s been a time of great change and shocking weird things happening, so that’s where the idea for the lyrics came from. We don’t really write protest songs or anything like that, it’s not really our way of doing things, but we sometimes have a little moment of commenting on what’s going on in the world without ramming it home, there’s plenty of other bands to do that.

AllMusic: The collage of "Sweet Arcadia" towards the end of the album is one of the more unique tracks on the album.

Cracknell: That was very much a Bob one, you can always tell when they’re Bob songs, because he’s a real wordsmith, he writes books and is a journalist, so things with spoken word and stuff don’t always come from him, but that one does, and it’s about the plotlands, which was in the fifties and sixties, where people who lived and worked in the city would buy little pieces of land and put little makeshift houses and things on them, normally near the water. There’s quite a few in Essex, and they build up these little communities, so it’s about that.

AllMusic: The title and overall theme of the album revolves around digging into your collective pasts; was that rewarding or did you find it a bit upsetting?

Cracknell: I’ve had enough time and enough distance to think very fondly about the place that I was desperate to get out of, and not because I had a horrible time, it was just so boring, really, where I grew up, and I was desperate to move to London, which I did at a very early age. But then looking back with hindsight, you can see the fun and funny parts of your upbringing and the place you grew up in.

AllMusic: Do your memories of those days exist more as images, sounds, or something else?

Cracknell: I’m amazed at how many things I’ve thought of and thought back to, and I can smell the smells of the place. I was talking to someone about when I was at school, I went to a convent, and the nuns used to take us to the Isle of Wight for a day trip, and they used to tuck their long habits, these full-length nun outfits, into their bloomers that they had on underneath so they could go paddling in the sea. Suddenly got this real sense of the smell of the place, which was a bit tinged with candy floss and ozone. It was amazing, it came straight back to me, this smell, so I get quite affected by smells.

AllMusic: It's been 25 years since the band's first album. Does it feel like 25 years?

Cracknell: We do think, “How can it possibly be 25 years?” We’ve had plenty of time for reflection and to do our own thing and bring up families and hang out with friends, so I don’t feel like it’s been a constant, I think that’s one of the reasons why we’ve been going so long, is it hasn’t been all-out, high-octane workload. We’ve given ourselves a chance to do other things, we do film stuff, Bob writes, Pete’s getting into film music, so that’s why we’ve managed to go so long, is having breathing space in between albums.

AllMusic: Did you discover that balance right away or did you have to find it the hard way?

Cracknell: We were talking about how 1994 was an incredibly busy year, we went to Japan, America, Europe, loads of TV, and I think at the end of that, we all felt completely and utterly done-in and knackered, and I think that was the lesson where we went, “Hang on a minute, let’s not try and cram too much into one year, otherwise we’re going to have an early grave.”