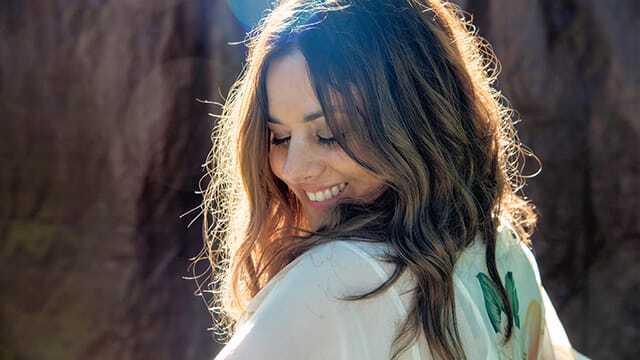 English singer-songwriter Rumer (Sarah Joyce) is no stranger to interpreting others' music, as displayed on her albums This Girl's In Love (Burt Bacharach and Hal David) and Boys Don't Cry (Todd Rundgren, Townes Van Zandt, Hall & Oates). Her latest, Nashville Tears, digs deep into the catalog of Texas-born songwriter Hugh Prestwood, whose songs have been hits for Judy Collins ("Hard Times for Lovers"), Randy Travis ("Hard Rock Bottom of Your Heart"), and Trisha Yearwood ("The Song Remembers When"), among others.

With input from Prestwood himself, Rumer carefully studied 15 of his songs and recorded them in Nashville. She spoke with AllMusic about how she takes the time to develop a relationship with each song, why it was important to refer to Prestwood's own demo recordings, and how her songbook albums influence her own material. Nashville Tears is out now on Cooking Vinyl.

AllMusic: Can you remember how you developed an affinity for career songwriters?

Rumer: I always admired songwriters who didn't perform, like Percy Mayfield, who wrote a lot of hit songs but didn't have a career because he had a disfigurement. So there are lots of reasons why people don't pursue a career as an artist, and I admire that, and how they can just focus on their craft.

AllMusic: When you're focusing on an artist's catalog, do you find it important to dig into their biographies for any additional context?

Rumer: It doesn't really matter. What was interesting to me was that he was a schoolteacher until he was 30, and he lived in El Paso and had a very ordinary life. And he was never really part of the scene, he was an outsider. He didn't go to Nashville, he went to New York. From there he found the Greenwich Village coffeehouse scene, and you can hear the influence of that in his work. From El Paso, Texas, to Greenwich Village and back again, he picked up some folky, James Taylor-y vibe, which is very interesting. So I guess I am interested in his life from that perspective. From what I know he's a very staunch conservative, and has a lot of conservative views that are different from mine.

AllMusic: I could see that being too big of a hurdle for some people to get over.

Rumer: I think that polarization is the worst thing, because it stops us from finding common ground, it pulls people further and further away from each other. I think art connects and heals, and I love collaborating with all types of people and learning about people who are different from me. Just because somebody's different from me doesn't mean we can't collaborate on their art.

AllMusic: Do you find you're ultimately more satisfied with the final result of a song that comes naturally or one that you really have to work on?

Rumer: There are some songs I thought would be easier in the studio that ended up being more tricky to nail. I had learned how to study songs when I did the Bacharach and Hal David album; before you even go in the studio, you've learned the melodies properly and listened very intently and immersed yourself in the subject matter and you've found your personal connection to it. Then there's tweaking with a guitar or using a dobro instead of a pedal steel, and you put it all together like a puzzle, you try things and take things away, until you find that sound that you're looking for. And it's really satisfying when you do get it.

AllMusic: Do you create your own narratives from the lyrics?

Rumer: Definitely. I have an emotional experience when I'm studying or connecting with a song for the first time, I'm thinking about my own life, like on "Learning How to Love," I'm thinking about the times that the lyric connected with me and how I feel about it, or "Bristlecone Pine," thinking about mortality and trees and how I love trees and what they mean to me, and visualizing this old tree, and I'm listening while driving around, walking, doing dishes, and just really connecting with it emotionally, and making it part of you, so that when you do go in the studio, you sing it like it's part of you, too.

AllMusic: Are you able to change the story of a song just by changing something like the key you sing it in?

Rumer: That can happen, a key can make a big difference to the emotion, suddenly it can lift or lilt differently, so that's very important. Preparation and pre-production is very important for an album like this, to make sure the key is in the right spot, so when you get to the high point, you're in the right spot to convey that emotion.

But if I did it, I didn't do it consciously. What I usually did when I approached the material was to use Hugh Prestwood's original demos as a blueprint, so I wasn't working from the versions that were recorded later. What I found in the demos was that he's a phenomenal guitar player and a great singer, and he's got these chord changes and these lovely voicings on the guitar, that once they were in the studio recorded by whoever, they didn't get brought in, so I wanted to try and keep some of the original voicings. What I was trying to do was to take it back to how the writer intended, and then build it from there. That was the approach.

AllMusic: You recorded "Flyin' Shoes" by Townes Van Zandt on your album 'Boys Don't Cry,' and when I talked to Steve Earle and Charlie Sexton about him, they were firm that his studio recordings weren't the "proper" versions of the songs, that one should listen to his demos or live cuts. It sounds like Hugh's songs might fall into that camp as well.

Rumer: I think I first heard that song on the documentary about Townes Van Zandt, he was playing it on there. What I loved about that song, and what I love about "Bristlecone Pine," is the feeling of the natural world and mortality. You feel like you're at this river, and I know it's a part of my soul, and I'm thinking about life and thinking about death, and I love that about music, when the writer is talking about mortality and their existence, and they're in nature and talking about their relationship, and they're almost one at that point. I love that about "Flyin' Shoes," is that he's just communing with nature.

AllMusic: Is it crucial that a song has good lyrics for you to be able to connect with it?

Rumer: I think so, they are important, words are very important. When I did the Bacharach and David project, I called it This Girl's In Love, because I fell in love with Hal David halfway through the project, I was like, "I think I'm genuinely in love with Hal David." I got into his spirit, and I got to know him through his words and who he was, so I love narratives and appreciate great lyrics very much.

The great thing about Hugh Prestwood is he has such a delicate, beautiful command of the English language. The dictionary definition of grace is "an economy of movement," which I really love, and he's an economical writer in that he doesn't waste words, he just thinks carefully about how to express something profound in the most beautiful way, which I really love about his work.

AllMusic: Did you connect with Hugh while making the album?

Rumer: Absolutely, he was a big part of the process, I kept in touch with him the whole time. I was checking with him constantly, "Is this correct, can you let me know..." and I changed some things that he wanted me to change, melodies that weren't quite right, lyrics that weren't quite right, or maybe misheard. So I changed a few things at his request. We flew him in to Nashville from Long Island and had a fantastic day together in the studio. I was Facetiming him in the studio, I wanted to include him at every stage. I wanted him to feel part of it, and also I wanted him to help me get it right.

AllMusic: The pessimist in me jumps to the ways in which that could potentially go wrong.

Rumer: That's always the fear, and I had initially suggested that we get him to play on some of it, and Fred, the producer, was like, "No, no, we don't know how it's going to go," like if it were to take too much time or something. But I wanted him to be a big part of the project, and every time we recorded something I sent it to him. When I first said I was doing 15 of his songs, he said, "Uh oh, a little of me goes a long way." He wasn't sure, because he's heard great versions of his songs that he loved, like by Trisha Yearwood and many others, but some of the covers of his songs didn't always please him. So he was nervous when we said we were doing a whole record like that, he wasn't sure if he was going to like everything. But he said he thought it was miraculous.

AllMusic: Do you keep a running list of other songwriters you'd want to explore with this much focus?

Rumer: There's definitely catalogs that are out there, but I dare not go down that rabbit hole, because I have done two songbooks in a row, and I really need to concentrate on my own songwriting. But of course, there's lots of songwriters who would be wonderful to do a songbook, and I'm sure I will do more in the future, just to show my appreciation for their work and to honor them. Great songwriters are really special, their stories are really important for our culture, and they're not appreciated or honored the way that they should be. So I like to appreciate them and honor them with projects like this.

AllMusic: Do you take pains to keep your interpretive work from bleeding over into your own songwriting?

Rumer: The part of me that's an interpretive singer runs parallel to the singer-songwriter, and they can feed each other. The Bacharach project made me improve so much as a singer, because the songs are extremely deceptively difficult to sing, and halfway through the project I felt so far out of my depth vocally, but I pushed through and I learned a lot more and got better at singing.

Then I did Boys Don't Cry, which was my first foray into interpreting from different perspectives. My interest is in being a storyteller where my gender or nationality doesn't matter, I'm just telling a story, and it doesn't matter that it's a song about a girl and a boy or an old man or a child, the story transcends all gender and nationality.

On Boys Don't Cry I was learning to tell stories that were separate from my own self, which is interesting in another way. So I guess it's another part of art that I'm interested in, interpretation and being a storyteller and narrator, but as a songwriter, I don't mix them up too much, I just take what I've learned and go down that different parallel path with it.

Steve Earle Refuses To Slow Down

Steve Earle Refuses To Slow Down