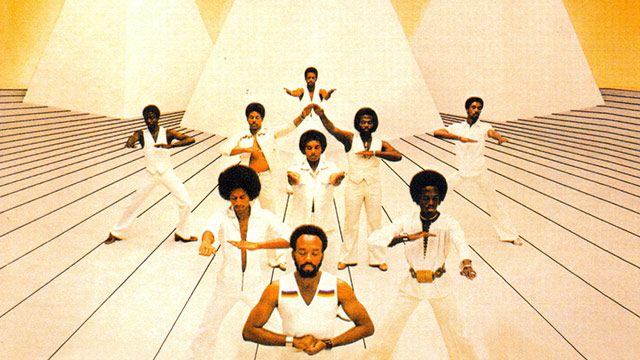 Coincidentally, we've reached this year of the R&B 40 series just after the death of Maurice White, a musician, songwriter, producer, and arranger whose cultural impact -- from his early work a session drummer, to his longtime leadership of studio and stage giants Earth, Wind & Fire -- is incalculable. During the mid-'70s, White and his close associates were operating at their peak. It was impossible to summarize 1975's charting R&B A-sides without stressing the prominence of White and EWF. The same goes for 1976, a year in which White's band placed another four songs on Billboard's Hot Soul Singles chart. For better and worse, White's '76 was much more eventful than that.

In May, as EWF were working on the album that became Spirit -- just after they had popularized Skip Scarborough's "Can't Hide Love," originally recorded by Creative Source -- the band were dealt a major blow with the death of friend, producer, and arranger Charles Stepney. EWF ably completed Spirit, another one of their essential recordings, and the rest of the year was colored with a stream of uplifting, life-enhancing soul classics that Stepney and White had helped to create. Months prior to Stepney's death, the duo established Kalimba Productions, and their work as a studio team fostered "Getaway," as well as the Emotions' "Don't Wanna Lose Your Love" and Deniece Williams' solo breakthrough "Free." Additionally, all three of the parent albums, co-produced in their entireties by Stepney and White, went Top Five R&B. A fourth '76 album on which they worked together, Ramsey Lewis' Salongo, was no flop either. The mighty, mighty White packed a career's worth of achievements into one year, and he was nowhere near finished.

January
Johnnie Taylor - "Disco Lady"
The Temptations - "Keep Holding On"
Stairsteps - "From Us to You"
Carl Graves - "Heart Be Still"
Michael Zager Band - "Do It with Feeling"
The Chi-LItes - "The Devil Is Doing His Work"
Street People - "You're My One Weakness Girl"
Faith, Hope & Charity - "Don't Go Looking for Love"
Aretha Franklin - "You"
The Masqueraders - "(Call Me) The Traveling Man"

May
Double Exposure - "Ten Percent"
Lou Rawls - "You'll Never Find Another Love Like Mine"
Aretha Franklin - "Something He Can Feel"
Natalie Cole - "Sophisticated Lady (She's a Different Lady)"
The Isley Brothers - "Who Loves You Better"
Ecstasy, Passion & Pain - "Touch and Go"
George Benson - "This Masquerade"
The Doobie Brothers - "Takin' It to the Streets"
Bobbi Humphrey - "Uno Esta"
Facts of Life - "Caught in the Act (Of Gettin' It On)"

June
James Brown - "Get Up Offa That Thing"
Side Effect - "Always There"
Ohio Players - "Who'd She Coo?"
David Ruffin - "Everything's Coming Up Love"
Millie Jackson - "Bad Risk"
The Sylvers - "Cotton Candy"
Donna Summer - "Try Me, I Know We Can Make It"
Bootsy Collins - "Stretchin' Out (In a Rubber Band)"
The Whispers - "One for the Money"
The Supremes - "I'm Gonna Let My Heart Do the Walking"

July
Earth, Wind & Fire - "Getaway"
Boz Scaggs - "Lowdown"
The Blackbyrds - "Rock Creek Park"
The Emotions - "Flowers"
Norman Connors - "We Both Need Each Other"
War - "Summer"
Diana Ross - "One Love in My Lifetime"
Roy Ayers Ubiquity - "The Golden Rod"
Enchantment - "Come On and Ride"
Funkadelic - "Let's Take It to the Stage"

August
Norman Connors - "You Are My Starship"
The Isley Brothers - "Harvest for the World"
L.T.D. - "Love Ballad"
Marvin Gaye - "After the Dance"
Bootsy's Rubber Band - "I'd Rather Be with You"
Dexter Wansel - "Life on Mars"
Brass Construction - "Changin'"
Bar-Kays - "Shake Your Rump to the Funk"
Undisputed Truth - "You + Me = Love"
The Brothers Johnson - "Get the Funk Out Ma Face"

September
Parliament - "Mothership Connection (Star Child)"
The Spinners - "Rubberband Man"
The O'Jays - "Message in Our Music"
Commodores - "Just to Be Close to You"
Natalie Cole - "Mr. Melody"
Funkadelic - "Undisco Kidd"
Luther - "Funky Music (Is a Part of Me)"
The Dells - "No Way Back"
The Chi-Lites - "Happy Being Lonely"
Jermaine Jackson - "Let's Be Young Tonight"

November
Deniece Williams - "Free"
Eddie Kendricks - "Goin' Up in Smoke"
Average White Band - "A Love of Your Own"
Earth, Wind & Fire - "Saturday Nite"
Ohio Players - "Far East Mississippi"
Dr. Buzzard's Original Savannah Band - "Cherchez la Femme"
Daryl Hall/John Oates - "Do What You Want, Be What You Are"
Al Jarreau - "Rainbow in Your Eyes"
Leroy Hutson - "I Do, I Do (Want to Make Love to You)"
Arthur Prysock - "When Love Is New"