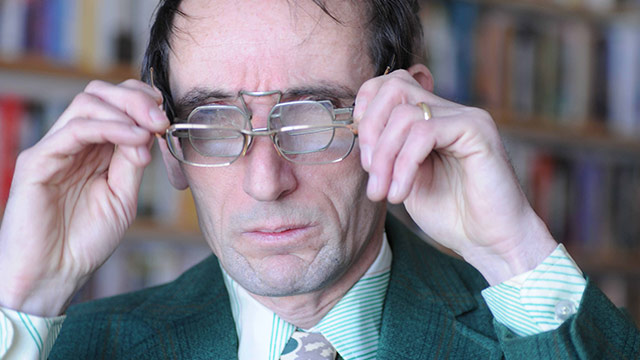 When collage pop duo the Books called it quits in 2012, former member Paul de Jong took his time to figure out his next musical pursuit. His first solo album, IF, released in 2015, ultimately followed much of the same musical template that the Books had created, blending found audio samples and spoken word snippets with original instrumentation. de Jong is hitting the road for a two-week tour starting on Thursday, and to mark the occasion we spoke with him about how he describes his music to strangers, one of the funniest musical performances he's ever seen, and how he had to learn to tamp down on his incessant tinkering to finish the record.

AllMusic: IF feels like it picks up where the Books left off. Did you know right away that you wanted to continue in this style?

Paul de Jong: Nothing was really obvious for me immediately. You know that you want to make music and have lots of ideas, but you’re so used to a style of working with your collaborator, or I was, that I had to find my own way again, and it’s not that I hadn’t existed before the band started, but 13 years down the road, a lot of things have changed, and you want to pick up where you left off before you started the band.

There were a lot of things in my style that I had to redefine. It took me a good while, but doing it on your own, you have to find an entirely new way of creating things, and in my case, finishing things, bringing an album to completion, which is a big deal when you’re on your own. That’s why it took me a while.

AllMusic: Are you the kind of musician who can tinker with something forever?

de Jong: I’m really good at doing 15 things at a time, and then when one thing nears completion, I’ll just start another five projects. Things tend to take a long time for me to finish, and I broke through that with this record, in a sense that I make visual art, I make video, I make music, I perform, I write, these are all things I’ve done since I was 10 years old. At some point I decided, “It’s great, if you want to make visual art or write books, that’s great, but you’re known for your music,” so if I wanted to reach an audience, I had to create a donkey on which everything else would ride. The donkey is producing an album and doing it, so I decided it was time for me to work in a more organized manner, and produce all these other fun things that I like, and by concentrating on the music alone for a year, I had more fun than I ever had. It was a great trip and I want to do it again.

AllMusic: The videos you make for the songs feel like an extension of that sensation you can get where the outside world seems to be syncing up with whatever you're listening to at the time.

de Jong: I often walk down the street, and my pace becomes the beat for what my eyes catch. I think that’s the way I like to write, is to make the completely unfamiliar instantly accessible, on a subconscious level. It can really resonate with life or with a natural rhythm, and at the same time, what you’re actually looking at is manipulated to a point to where it’s nothing you’ve seen before.

AllMusic: It feels like there's some attempt to reconcile the natural with the synthetic.

de Jong: Or the intellectual with the emotional, too. It’s what your senses pick up and then is interpreted by your intellect in different ways. You can feel one way and think about it another way, and those are the juxtapositions in art. Some people might not pick up on that at all, but they still have a certain frame of reference with it and get something completely different.

AllMusic: When you meet a stranger, what do you tell them that you do?

de Jong: That I’m a musician. Sometimes I see these bios, and I used to be like that, too, “I’m a performer, writer, choreographer, video artist…” And then I felt like, “Just do away with all that.” I just say that I’m a musician, because that’s what I had formal training in, and by and large I’m an artist.

AllMusic: If they press you on it, do you have a set answer for what kind of music you make?

de Jong: Sometimes it’s really kind of embarrassing to have to explain. With the Books, I’d call it a band, but we really didn’t play live for the first four years, and I sometimes felt embarrassed to say that we were our own genre and all that, but essentially it is collage music. That’s what I’d settle on even with my own music now, it’s really still like the Books was. It’s music that uses modern technology to edit these disparate elements together into one, and that’s basically what I tell them. At least 50 percent of what I use is actually instruments and playing that I record in my own studio, so these elements are reproducible onstage. That’s my explanation, is that it’s a band, because I can reproduce that music onstage.

AllMusic: When fans give you feedback, what do they tend to gravitate towards?

de Jong: I enjoy an audience of real close listeners, they are intimate listeners. A lot of people remark on how they enjoy the great detail in the music, and the fact that you can actually put it on as background music and enjoy it on that level, as well. People remark on that, that there is detail, but the essence doesn’t get snowed over by detail.

AllMusic: Are you an intense listener yourself?

de Jong: Absolutely, yeah. Not only as a professional listener, because as a composer and a writer, I have to control different listening functions in my own mind to assess whether something is enjoyable, but I have learned that from listening my entire life myself. Growing up, playing in bands and listening to music, you learn to listen to your own instrument and to yourself really well, but then you learn to place your listening, your own instrument, in the total of instruments that are playing, so you’re learning to listen in a layered way.

You treat music differently that you know really well. Bands I listened to when I was 13 years old, suddenly I wonder what I’m hearing from it anymore. When I listen to it on a beat-up old cassette tape on tiny little speakers where you can only hear ten percent of the music, my brain fills in the rest of it, because it’s just a reminder. Then I go back to the original recording, and it’s a total revelation and I hear details I’d forgotten about or never heard. Music has to first work on a pure emotional level, it has to come in through the back door of your brain, that’s how I’ve always experienced it. It does it instantly, it’s a miracle.

AllMusic: Is there any music you've recently dug back into from your childhood?

de Jong: Sure, and I’m not even going to be embarrassed about it. I’ve been listening to Soft Machine, which came a little later, but for years I was only listening to two of their songs and had forgotten about all the rest, so I started listening to them again. I’ve been listening to Earth, Wind and Fire, for instance, something I listened to when I was 10 when I’d go to dance parties in middle school, and I remember that it made me feel a certain way, it’s total joy and really well-crafted songs with good singing. I have kids myself now, and it puts a smile on all our faces to hear it. I realized that what I listened to as a kid was often very symphonic, very layered, lots of art, and that comes from my background in growing up with classical music almost exclusively. I went from classical music straight to symphonic rock and prog rock and Pink Floyd and Yes and Rick Wakeman and that kind of stuff.

AllMusic: Reviews often cite how funny your music can be. Who are some musicians you find humorous?

de Jong: On one of the later live concerts from Elvis Presley, he’s playing a stadium, it must be 1977 or something. He’s really nervous, he starts his first song, and he forgets the words and ad-libs. He’s there in front of 40,000 people or more, and ad-libs his way through two verses, he can’t get himself back into it, and it’s humble and it’s funny and it’s incredibly professional and it’s heartbreaking. He makes the funniest jokes just completely offhand, and I admire that, I think it’s incredibly humorous, totally timeless. His professionalism and also being vulnerable onstage, it’s very endearing, and that’s something I aspire to. I hope the jokes I put in my music are more than just gags, I hope that they withstand time and that they will survive.