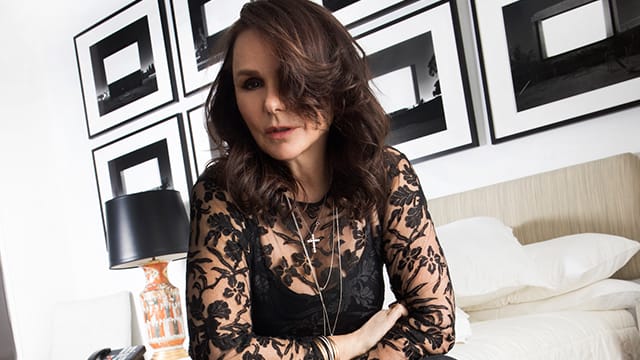 The dangling carrot of the second chance is one of the more tempting but dangerous propositions in the creative world -- is it possible to revise and improve past work, or is looking backwards an inherently counterproductive endeavor? It took Patty Smyth 33 years to decide it was time to revisit her version of Tom Waits' "Downtown Train," originally featured on her 1987 album Never Enough, and she is confident that her new, stripped-down rendition is superior to her first crack at it.

The new take on "Downtown Train" is featured on her upcoming album, It's About Time, her first in 28 years. Smyth spoke with AllMusic about the motivation behind her new rendition, if Rod Stewart's hit version from 1989 impacted how she chose to treat the song, and her observations on how women were treated by the music industry back in the 1980s versus now.

AllMusic: Whose idea was it to revisit "Downtown Train"?

Patty Smyth: It was a last-minute decision on my part. I didn't do "Downtown Train" for decades because I really never liked the production on my Never Enough record. I felt like there's something really emotional about the song, and even though I sang it pretty good, it just had too much stuff on it. I even put David Sanborn on it, because he was a friend. And when Rod Stewart recorded it a couple of years later in a very simple, straight-ahead production, and had a hit with it, that kind of solidified what my thought was about it.

The last five years that I've been touring, I said to Keith, who plays with me in my band, "Let's just do it with an acoustic guitar," so that's what we were doing. I'd either do it in an encore or in the middle, depending on the crowd and the mood, and it was so impactful, just me and him. So for this little record that I've made, I played them the original "Downtown Train," and a live version of mine, and we decided to do it in a very sparse way, with just a shaker on the chorus, and it got huge just from a shaker. Maybe back in '87 or whatever, I wouldn't have wanted to record it like that, but that's how I want to record it at this point, to just stand there and tell the story.

AllMusic: In addition to making it distinct from the original Tom Waits version, did you feel obligated to distinguish the new version from the Rod Stewart one?

Smyth: The truth is I haven't heard Rod's version enough to even know, I just know it's different from the version I did in '87. I haven't heard his version in years. Maybe in the background in a restaurant here or there, and I do not listen to my old records. I don't think Never Enough is on CD, or on Spotify, which we're working on. People do go back and record their songs so they own the masters, and that's not something I was doing this for, I was doing it because I wanted to get it right, how I feel it should have been done.

So I wasn't having to beat the vocals that I did before, because the vocals I did before were for that track, which was very different. I really liked doing it stripped down, bare bones, and being able to pull it off with just you and an acoustic guitar, live, night after night, and when I did it in the studio, we were trying to do the same thing with a little more meat and bringing it into these times, sound-wise.

I realize now that I didn't realize then that I had the skill of knowing a good song when I heard it. I heard "The Warrior" and I didn't think about how goofy the words were, but I knew that it was a hit song, and that I could sing it really good. And the same with "Downtown Train," and I thought it would do better on that record. So I'm just happy that I got to sing it again, because I love singing it and love playing it, and in this iteration, it's going to have a longer lifespan and long legs, because I won't get tired of it or sick of it.

AllMusic: Has the meaning or the story of the song evolved for you since 1987?

Smyth: I think when I did it the first time, my producer brought me the song, I learned it, and I sang it. It was a great song, and as soon as you heard it, you loved it, and I identified with it. My family's from Brooklyn, I lived there as a kid and spent some of my childhood there, so there was a connection to that song, and I knew what he was talking about. I still ride the trains uptown and downtown, so I just stepped into it, like a coat you've worn before and you know it looks good. This time, I really got into trying to sing it, trying to feel it and not be distracted by anything except the poetry of the words and the story, but it means the same to me, it still resonates that that was how I grew up, riding the train in and out of downtown, and I know those Brooklyn girls.

AllMusic: What memories does the song conjure for you now?

Smyth: I think of West 4th Street. I grew up in the Village with my mom running nightclubs and coffeehouses, I probably spent more time in that train station than in a lot of other places, and taking the train out to Brooklyn. "Outside another yellow moon has punched a hole in the nighttime…" It's just beautiful. My mom also ran away to the circus, and he has that sort of carnival thing where he's really interested in all of that, it all speaks to something that resonates with me.

AllMusic: But you didn't run away to the sideshow on Coney Island or anything.

Smyth: I remember the Coney Island sideshow from when I was really small, and it was scary as shit. Me and my sister still talk about it, the sheep with two heads, it was horrifying. I remember the smell of it. I feel like that song is both an American heartland and also an urban, New York thing, it's weird.

AllMusic: There's an additional bittersweet element now, since we're all less likely to have fleeting encounters on trains these days.

Smyth: I never had any awesome fucking moment on the subway, I'll tell you that much. Just that one time a girl got on the train a few years ago completely topless, it was on Central Park West, and no one noticed. She was completely topless with big, beautiful boobs, and went down into the train station on 81st Street and got on the train, but because everyone was looking at their phones, I'd say only 10 percent of the people on the train car noticed her. But I never had some awesome moment where I saw someone across the train.

AllMusic: Your husband [tennis legend John McEnroe] is one of the most competitive people I can think of, did that attitude ever bleed over into the way you approached the music world?

Smyth: I think that's counterintuitive to art; being a singer or musician is not a competition, there's room for everyone. There are people who are super competitive and want to sell more records and do better than this or that person. I always enjoy a great song and a great singer, so it's not like I don't want to hear that, and if someone's better than me, fine, that gives me something to reach for. I don't want everyone to be worse than I am.

I think John is competitive when it comes to sports and games and stuff, and he's a perfectionist, so he wants to do well, but one thing the quarantine has helped him do is get really great at guitar, way better, he plays every day for a couple of hours, minimum. He's competitive with himself when it comes to that, he'll get me to sit down and play the songs on my record so he can learn them better. So he's more competitive with himself in that way, and if anything, maybe I've mellowed him out a little, and I think he realizes that music isn't a competitive thing.

I want to do well, there's no question, but I'm not holding up somebody and saying, "I have to do better than this person." The music business, back in the day, really set women up to be competitive, because when my first record came out, they'd only add one female artist a week, which is mind-blowing, but 100 percent true. So it would be really hard to not be annoyed that Pat Benatar put a record out the same week you did, or Joan Jett, because there was only room for one of them. Think about it now, there are so many women on the radio in pop, country, and hip-hop.

AllMusic: There's still shades of that in how women seem to be pitted against each other in music, whether it's Nicki and Cardi or Taylor and Katy.

Smyth: Women can fall into it. I have a friend, a frenemy, who wants to be a singer/songwriter, but that wasn't always what she did. I've released songs and she hasn't commented or said anything, it's weirdly quiet. I almost said something, but it's like, "OK..." It's unconscious, we don't realize that society really makes us feel like we have to compete against each other and be the best-looking or whatever it is, it's all around us. I didn't teach my daughters that, but the message is there, it's so hard to get away from it.

It is terrible that they try to make Cardi and Nicki go after each other, how one is the keeper of the gate and there's the new one coming, she should be mentoring Cardi, and maybe she is, but that's not interesting to the press. Women say it, but need to do it. John always says that if we got together, we could change the election, the laws, if we could just get on each other's side to try to get equal pay and equal rights and all that stuff. It seems like societally, it's so engrained, this unconscious competition going on. There's a lot of competition going on in the world right now, as opposed to trying to unite, even around the virus, it's somehow been more divisive.

'It's About Time' will be released on October 9