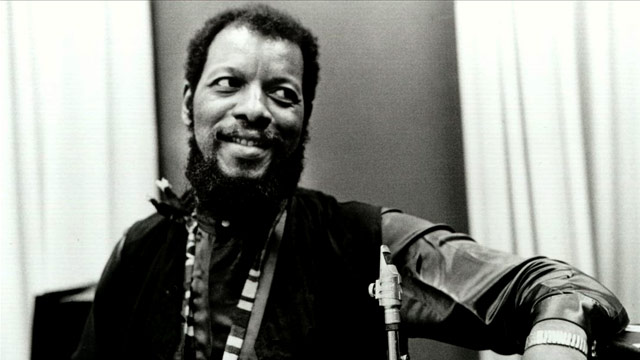 There were their strange songs, any one of which could have made a lesser band's career and each of which had the knack of standing the accepted doctrines on their head.—The Nation of Ulysses "The Sound of Jazz to Come" Plays Pretty for Baby (1992).

When I read that Ornette Coleman had died yesterday, I remembered sitting in my dorm room in 1993, listening to Coleman's 1958 album, Something Else!!! The Music of Ornette Coleman. Digging on the frenetic, swinging "When Will the Blues Leave," I turned to my saxophonist roommate and asked, "Man, why doesn't anybody talk about Ornette anymore? I mean, he's still alive. Where's his masterclass?"

My roommate shrugged, "Nobody cares. He's a free jazz guy. They don't think he's important to the tradition."

As a jazz student, I was well aware of Coleman's innovative contributions to the development of free jazz and modern creative improvisation. Today, in light of his death, it almost goes without saying how important he was to jazz and to music in general. But it wasn't always so.

In the late '80s and early '90s, most people I knew rarely talked about Coleman with any regularity, let alone reverence. It wasn't that my classmates or professors disliked his music—some probably loved him. But Coleman, with his harmolodics and his squelchy, animalistic intonations, was a fringe element, a dicey associate of the tradition we were studying, whose relevance we took completely for granted. For some reason, Downbeat critic Leonard Feather’s flippant description of Coleman’s style as “anti-jazz” had stuck.

This was all decades before he won the Pulitzer for Jazz with 2006's Sound Grammar or was awarded a Grammy for lifetime achievement in 2007. While Coleman's music was supposed to be free jazz (a term he was never fully comfortable with), I loved how you could hear form and melody and call-and-response group interplay on his early albums. Also, being a trumpet player, I was immensely drawn to Coleman because he worked with sideman Don Cherry. They were like a gorgeously skewed, abstract version of Charlie Parker and Dizzy Gillespie. Their almost-psychic connection famously found them beginning songs together without even counting off. They’d just stare at each other in silence before leading off in unison.

I had attempted to play jazz since junior high, but I was also a kid of the '80s, my head full of skateboards and Star Wars and punk rock. Growing up in Michigan, I was aware of The Stooges, and the MC5—proto-punk bands who, via their own pure, unadulterated, brazen musical inspiration, often tried to capture the energy, declamatory sound and frenetic spirit of jazz for their own boundary pushing purposes. Steve Mackay's unhinged sax on The Stooges' Funhouse still makes me sweat with joy.

And at the same time that I was discovering bands like Bad Brains and Minor Threat, I was also crate digging for jazz cassettes, sometimes buying them based on the covers alone. One album in particular stuck out at me. It featured four of the coolest looking motherfuckers I’d ever seen, each one donning a suit and a cool, disaffected expression, like off-duty Secret Service agents who might arrest me if they actually gave a shit. This was how a jazz band would look if David Lynch was their manager. It was the most badass thing I'd ever seen.

I bought the cassette, went straight home, and shoved it into my tape deck. Sitting on my bedroom floor, I was completely unprepared for the work of genius I was about to hear. Without warning, the whole band started playing at once, a serpentine, kinetic melody. It sounded like Charlie Parker, but weirder, like the moaning angry ghost of bluesman with tourettes. Bebop ectoplasm. A song summoned forth from the netherworld of jazz's forgotten past, played like a sufi chant or a sped up field holler, or like Henry Rollins in front of Black Flag.

Kick Out the Jams, Mutherfucker, this was punk rock.

Technically speaking, it wasn't punk rock. What it was, was Ornette Coleman's 1961 landmark This Is Our Music. The song was "Blues Connotation,” and the band, along with Coleman on a white plastic saxophone and Cherry on that ridiculous pocket trumpet was Charlie Haden on bass and Ed Blackwell on drums.

I was hooked. This was the commingling of everything I’d heard up until this point in my short life that I’d ever considered cool. Jazz with a punk edge and an avant-garde artfulness that spoke to my rebellious teenage mind, reared on '50s B movies, Little Richard sides, Reagan-era angst, and the overriding impulse to do... something, anything that wasn’t normal.

Of course, I wasn't alone. Crate digging yet again my freshman year of college, my eyes landed upon another album cover packed full of men in suits. This time, the guys were captured in the ecstatic act of performing, arms and legs akimbo, the singer crouched with full-throated vigor. It was maverick DC noise-rock outfit The Nation of Ulysses' 1992 opus, Plays Pretty For Baby. Listening in my dorm, I came to the track, "The Sound of Jazz To Come” and the suspicion I’d been harboring since track one was confirmed. This band was tremendously influenced by avant garde jazz. Their free jazz-esque use of dissonance and space was evidence enough; by the time they actually started playing excerpts from Coltrane’s A Love Supreme at the beginning of a track named after an Ornette Coleman album, my mind was blown.

They listened to Coleman too, and they got it. Of course, they weren't the only ones. Charlie Haden booked the Minutemen as an opening act at a show in 1984 and even sat in with the band for “Little Man With a Gun in His Hand.” After recording his 1979 album “The Bells” with Don Cherry, Lou Reed said In a 1980 interview with Creem's Dave DiMartino, "I had had this idea when I first discovered electric guitar: wouldn't it be incredible if you could play like Ornette Coleman on the guitar?" Coleman later guested on Reed's 2003 album, The Raven. Patti Smith, who performed with Coleman when he curated London’s Meltdown Festival in 2009, was quoted in The Guardian saying, "I've been obsessed with Ornette ever since my friends and I formed a jazz club at school in the 1960s to play our records to each other...Ornette is like a genius—and a child—in the way he approaches music. Part of his appeal to people in the world of rock and punk is that he doesn't require you to be a complex musician. He just requires that you listen, communicate and play with feeling."

Coleman himself was never one to revisit the past, at least creatively. He was a river of forward-motion, evolving his form with each new record. He was a saxophonist, but he also played trumpet and violin—often to his fans dismay. His roots were in bop, but he eventually incorporated classical, electrified funk, and electronic sounds into his repertoire to seamless effect. He was a musician, a conceptualist, a philosopher, and a much needed pain in the ass for stodgy jazz traditionalists.

In later years, after finally earning the respect he long deserved from the jazz community, Coleman still rarely reengaged with his classic compositions. He was eternally inspired, ceaselessly emboldened to challenge himself and the strictures of jazz establishment, new or old. That might be why, back in my dorm room in the early '90s, I found it so perplexing that nobody seemed all that interested in his music.

At the beginning of NOU's "The Sound of Jazz To Come," singer Ian Svenonius delivers a bizarre, spoken word manifesto in the third person and the past tense, extolling the glory of his band as if it were an ancient religion or a branch of the armed forces. The rant is pseudo-satirical, but the words could very easily apply to Coleman:

There were their strange songs, any one of which could have made a lesser band's career and each of which had the knack of standing the accepted doctrines on their head. There was their polysyllabic language and their slow acid style that corroded the sanctities. There were their concerts, with their mumbled messages which only the better souls understood. There was the way they looked: shaggy eyebrows, ashen faces with unforgettable eyes, rough clothes that hung too loosely on their shrunken bodies, a shell of silence into which they seemed to have retreated for good and from which only the most persistent strategy could draw them. They refused to be patronized or dismissed, turned into a cult or giggled at. The important thing was to build a social analysis that would encompass modern culture and make humankind reckon with it.

Ultimately, Ornette Coleman's music—spastic, soulful, atonal, gross with skronk and sharp with anger, yet lyrically breathtaking and deeply beautiful—has found its place in the halls of the jazz institution. But I don’t know if he really cared. I think Coleman’s legacy goes deeper, winding its way into the rebellious hearts of every player, from punk to blues, whose music bucks against the confines of tradition.