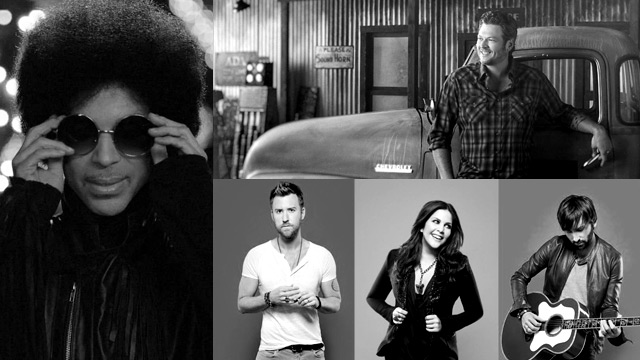 September winds down today with the final batch of new releases for the month, including a few A-list country artists, two albums from a rock/funk/R&B/everything else icon, and a pop star gives herself a makeover.

Prince storms back to Warner Bros., the label he famously feuded with in the '90s, leading to his temporary name change, with not one but two new albums this week. One is a strictly Prince affair, Art Official Age, and the other, PlectrumElectrum, features his current crop of proteges, all-girl trio 3rdEyeGirl. Country stars Lady Antebellum are back with 747, their first album with new producer Nathan Chapman, noted for his work on several of Taylor Swift's smash albums, and Blake Shelton makes his first record since becoming a crossover star on NBC's The Voice, Bringing Back the Sunshine. Rounding out this week's headliners is Colbie Caillat with her new album, Gypsy Heart, and a new chic look and pop sound courtesy of pop hitmakers Max Martin and Babyface.

For more on this week's new music, head over to our New Releases page.