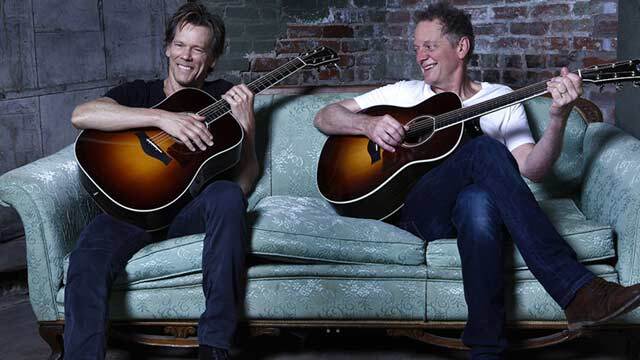 After eight studio albums, the time to consider the Bacon Brothers -- featuring actor Kevin Bacon and his composer brother Michael -- as something akin to a lark has certainly come and gone. Initially the duo tried its hand at writing songs with other artists and current trends in mind, but after changing course and writing more personal material to perform themselves, the brothers found their voice and have been releasing albums since 1997.

Their new album, The Way We Love, features mostly songs written by the Bacons -- Kevin wrote six -- and explores the relationships we create between each other, the way we relate to music, and how we remember those we've lost. Kevin and Michael spoke with AllMusic about their journeys as songwriters, how their hometown of Philadelphia still looms large in their music, and how their day jobs influence their band.

AllMusic: You've said that the album is based around questions about love. Did you start with that theme in mind or did it emerge later?

Michael Bacon: I think we have a pretty good intuition of what songs are right for us to put on a record. We don't do much planning, but the band leads us around by the nose rather than the other way around. So we've been cutting some things over the last year, a few songs at a time. Once we had 10 songs, I think of that as a milestone where you stop where you're doing and say, "These are the best songs we can come up with right now, let's organize and sequence them," and that's where we are.

AllMusic: Where do you look for your satisfaction in songwriting, is it more about challenging yourself in some way or creating something that feels good?

Kevin Bacon: I can tell you that as soon as I write a song, I always think to myself, "This is the last one I'm ever going to be able to write, I don't think I have another one." I didn't think that we had another album's worth of stuff, and then you turn around and it comes together, so that's what's shocked me.

I think that in terms of what's satisfying, the most satisfying thing you could possibly have as a songwriter is for somebody to say that it connected with them, especially when you write things of a super-personal nature, which we tend to do. We've written generic songs, songs that are fun, songs that are supposed to appeal to a wider group of people, but a lot of it is very personal stuff. So when someone who doesn't really know you says, "That song really affected me," it's an amazing feeling, that makes you want to keep going.

AllMusic: Are there any of the new songs that you're especially proud of and hope people latch onto?

Kevin Bacon: It's a little frustrating sometimes, because what you really want, and this has pretty consistently not happened for us, is you want somebody to listen to a record and go, "It's a really good record, but that'sthe song." And I don't know that that's ever really happened for us, maybe on our first one a little bit. This may be a function of the style of the songs, some are more rock or folky or country, that people will respond to different songs. In some ways, it makes life a little easier when everybody says, "OK, we're going to put all our eggs in that one particular basket," but it doesn't happen with us.

AllMusic: Is that sort of focus on a particular song something you're looking for?

Michael Bacon: Oh, I've been chasing it since 1969. One thing Kevin and I found out about ourselves as songwriters and musicians is before we formed the band, that's what we were doing, getting together and saying, "Let's write a song for Garth Brooks to record," or a novelty song about a trend that's going on in the country now. We were focusing only on the get rich quick kind of things.

But when we got our first gig, which was only for the purposes of being one gig, in 1994, we knew that being commercial songwriters and sitting down and trying to write a hit was not really our strength, and if we were going to expect people to pay money to come see us, we kind of changed our attitude. Not consciously, but we said, "We have to make it more about who we are," and tried to expose our personal lives in hopes that the audience identifies with it rather than getting up and doing Top 40 material. So we were intuitively right, and that's when we do our best work.

AllMusic: Do you think any of the songs on this album display your Philadelphia roots in an especially strong way?

Kevin Bacon: Soul and funk music were really big for me, so I'd say that "Play!" is the song that is most in that world. Philly is interesting, because there's all kinds of stuff going on there, there's a coffeehouse scene that Michael was a big part of, and Hall & Oates and early doo-wop. But we didn't realize at the time that we were living in a music city, you just live there, and there are places to go and play and listen to music, great radio stations, and it was really just part of our lives that we took for granted.

AllMusic: The two of you grew up with four sisters, what sort of influence did they have on the music you heard growing up?

Michael Bacon: One thing that was very strong was our elder sister, Hilda, who was reminiscent of Mary Travers from Peter, Paul and Mary, she was a great guitar player and a great singer. Recently I found some demos we'd done and I was kind of shocked at how good the vocals were. So she was very influential on me, she taught me how to play the guitar, and I taught Kevin how to play the guitar. In high school, we had a five-piece jug band, and that was my first point where I felt like I had some kind of talent that people might think I'm good.

Kevin Bacon: I always compare those two; in live theater, you are doing the show, it has a beginning, a middle, and an end, and you are sharing the experience just with that group of people and it's ever exactly the same again. There's butterflies, there's that feeling that anything can go wrong, and that's what it's like when you're playing a live show.

The studio is like making a film, you have a controlled situation, there's take two, editing, things are done out of sequence, and what you're trying to do creatively is capture the feeling of live. That's what good film acting is, that's where you're able to think that it's the first time this is happening to this person, even if it's take 30 with 18 different setups for one scene. That's the professional pretending part of it.

AllMusic: Musicians often tell me about how important it is to allow themselves to make mistakes, does that play into it for you?

Kevin Bacon: I don't have to allow myself to make mistakes, they just come naturally. But part of what's really fun about acting in a movie is that even if you know the script, you've read the script, you know the actors, and if you've done the scene time and time again, you have to allow yourself to be OK with trying something new, being immediate, or maybe the actor you're working with plays it differently. There's the muse, that indeterminate kind of mistake that becomes the best part of a scene or a film, and in the studio, you can have that for sure. Years ago a tambourine fell apart, someone laughed this ominous laugh, and it was so cool that we kept it.

AllMusic: Michael, you write scores for films and documentaries, and there are some easily-spoofed tropes when it comes to scoring that I imagine you try to avoid. Do you have the same instinct when it comes to writing rock songs?

Michael Bacon: The hard part is that I find no similarities between being a songwriter and a composer. In terms of film scoring, you try to avoid cliches as much as you can, but unfortunately there are a lot of things that just always work and are always going to work. It goes back to what we were saying about mistakes; the most delightful area you can get into is when you make a mistake and you go, "That's wrong, but maybe I can make that work..." and then this mistake that was outside of your arsenal of skills gets embedded in there, and you get one more item stronger and bigger and ready for the next thing.

AllMusic: What music has been helping you guys get through everything lately?

Kevin Bacon: Just to have an instrument around and to be able to play a little bit, even if it's not writing or a creative thing, just to be able to make a little music on our own, has been really nice. What I keep going back to are these really cheesy "dinner with friends" playlists, which are really super light, kind of like jazz standards, shit I never, ever listen to. But for some reason, at the end of the day, I'm just enjoying that kind of stuff. I'm not quite sure why.

Michael Bacon: My wife forced me to set up our turntable and receiver, and I'm glad she did, because then we got out my old records that I never threw away. One of our favorites is Robert Frost reading his poetry. I love getting out the 12-inch jacket covers and reading the liner notes; I was just reading the credits on Nashville Skyline and thinking about how Dylan just opened us up to these players, Kenny Buttrey and all these amazing guys who played on it.