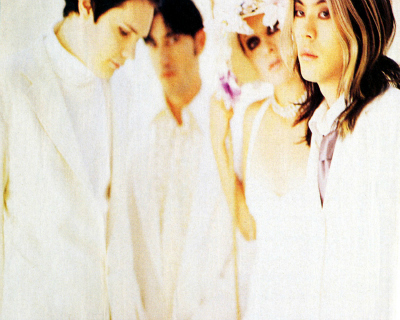 Between the release of latest record Oceania -- one of AllMusic's Best Albums of 2012, which editor Matt Collar called "an exuberant, gloriously melodic, fluid return to form" -- and the milestone of double album Mellon Collie and the Infinite Sadness reaching Diamond status in record sales (10 million copies!), last year was a good one for Smashing Pumpkins. The quartet finished the year by remastering the epic 1995 release and reissuing it in 2-CD, 4-LP, and digital formats, as well as a deluxe box set spanning five CDs and a DVD.
In addition to remastering the sprawling double album, the Mellon Collie and the Infinite Sadness Deluxe Box Set boasts 64 bonus tracks of previously unreleased or alternate versions of Pumpkins' tunes from that era, along with a DVD featuring a 1996 London concert and bonus live performances, plus two books of notes, new artwork and a decoupage kit to design one's own Mellon Collie scenes.

Above: Mellon Collie and the Infinite Sadness Deluxe Box Set (click to enlarge)

Details about this giveaway:
Winner will be randomly selected on Friday, January 18.
Must be a U.S. resident to win.
Winner will be contacted via the service they used to enter.
If no response is received from the winner within 72 hours, a new winner will be drawn from the pool of candidates.

Want more? Get info about the releases at the Smashing Pumpkins website, or pick up a copy of the remastered Mellon Collie now!

Back to the buzz bin! In 1996, Smashing Pumpkins won a Grammy in Best Hard Rock Performance for "Bullet With Butterfly Wings":
https://www.youtube.com/watch?v=8-r-V0uK4u0