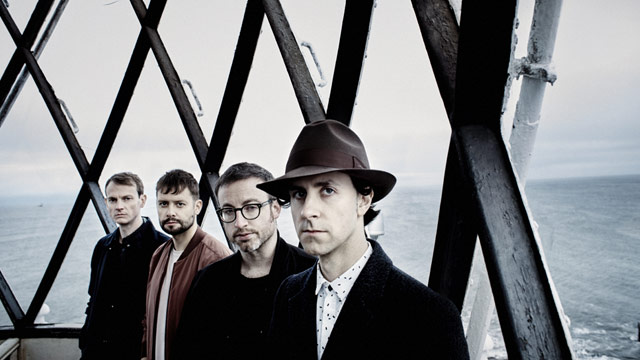 English rock band Maximo Park hasn't been afraid to remark on current affairs and their resulting tensions, both of which take center stage on the band's latest album, Risk to Exist. With songs offering commentary on issues like the refugee crisis and the general sense of instability that seems to be rippling throughout much of the world, frontman Paul Smith and his band worked extra hard to pull off the delicate balancing act of addressing vital issues while not sounding preachy or alienating the fans who just want to dance.

The band headed across the Atlantic to Wilco's the Loft studio in Chicago with an album's worth of songs ready to go, and tracked them live, with a little help from Mimi Parker of Low, who provides backing vocals on several tracks. And it all worked, according to editor Heather Phares' review: "Thanks to the sincerity and strong melodies that have been Maximo Park's mainstays since the beginning, Risk to Exist combines good intentions with good music."

Smith hopped on the phone with us before the album came out to talk about the necessity of having the songs fully fleshed-out before hitting the studio, the new sense of urgency that fuels the band's music and writing, and an uplifting Eddie Vedder encounter.

AllMusic: What sort of preparation did you have to do, knowing that you were going to be recording these songs live?

Paul Smith: We rehearsed intently for a few months and got the songs into good shape. We were out in Chicago, in Wilco’s studio, and the first song on the record, “What Did We Do To You To Deserve This,” the first tick of the first song that we recorded was about 40 minutes after we arrived there, which is a bit of a miracle compared to the other times we’ve recorded. You can end up spending ages trying to find a drum sound or tuning things and that stuff. But Wilco’s studio is very artist-friendly, you can just turn up and play.

AllMusic: So you guys aren't big on figuring things out once you get in the room.

Smith: The honest truth is that we can’t afford to do that. With the last record, it was a bit more like that, because we recorded a lot of it in our own studio in Newcastle. This time, you’re there, you’ve got three weeks, and if you don’t do it, you’re not going to put out a record, or it’s not going to be very good, or you’re going to spend a fortune. So you have to have that intensity and be well-prepared. So we have done it in different ways, but we’re pretty into the craft of songwriting, even though we like to have as much direct inspiration, the energy of those first ideas, on our albums, we still believe in crafting things. We did all that before we got to Chicago.

Then Mimi Parker from the band Low came in from Duluth to join us to sing backing vocals on five of the songs, and that was a step outside of what we usually do with our records. We’ve been very self-reliant, there’s hardly been anyone else on our records, so to have a backing vocalist felt like doing something different and hooking up with someone who you’ve loved their music, that was a bit of a dream for us. There’s also a horn section, which felt right, and brings in some more of the soul influences that we’ve always loved in our band, and it’s filtered in a bit more on this record.

AllMusic: The album feels like it has a real sense of urgency, like an energized reaction to our strange modern times.

Smith: That’s definitely part of the deal. Some of the lyrics that I’d written for the songs had these more political or social world issue kind of connotations to them, and they were becoming more explicit. A lot of our previous albums had been full of hooks and everything’s happening all at once, so we were trying to say, “Since these songs are a bit more groovy, let’s let the rhythm section and the vocal do the work, strip things back a bit.” Then we were talking about the lyrics, saying, “Is this the direction we want to go down, and if so, should it dominate the record?” In the end, we said yes, because it felt like those kinds of things, the sense of urgency about the path of the world or social issues, are more buried in the texts of the songs, but this time we decided to say that these things we’re concerned about, whether it’s the rise in right wing language or the migration crisis that’s happening in the Mediterranean; these bigger concerns are our concerns.

I think a lot of songs that are supposedly political are not very good because the message is too blunt, it’s too obvious, and the music takes a backseat to the message, so we were trying to create something that has something universal about it where somebody could listen to it and not feel like they were being hectored or talked down to. We’re trying to find the right balance, and I write songs about things that I’m angry about, that I’m upset about, things I love, people I love, people you don’t know anymore because of whatever kind of circumstance. If anything, the lyrics are about empathy and solidarity, and a sense of taking action, because we may not have, if you’re a left-leaning, more liberal person, you do feel like the world is changing, and it’s altering in a way that’s not sympathetic to your views. Part of that is a polarization of opinions as well, there doesn’t seem to be a kind of middle way where people can understand each other, it tends to be very extreme arguments. So there’s a lot of pleas for understanding within the songs, there’s a sense that we are all in this together, whether we like it or not, and trying to hold people who are in power to account.

AllMusic: Are you the type of lyric-writer who keeps scraps of paper all over the place?

Smith: There’s lots of half-full notebooks, and I go back and think, “What was that about?” And some of them aren’t very good, which is always sobering, you hope that none of those get into the songs before you put them out. A lot of our songs have been pasted together from fragments, and you see a pattern that goes on in your writing, certain phrases make sense with something that comes along a few months later, because it’s your sensibility, it’s your way of writing, of seeing the world, and it’s important to have that identity that runs through the songs. That’s why it’s pretty much always me who writes the lyrics, because it feels like we have an identity.

You could listen to Captain Beefheart, and certain patterns will appear, even though they seem quite random, or Mark E. Smith from the Fall, and I’m certainly nowhere near those guys, even though I love them, but you have to do your own thing, otherwise things become very bland very quickly, especially when we’re trying to talk about things that are somewhat universal. If there’s something a bit more random in the notebook, but it feels right, then it should probably go in the song. Those moments can be the mysterious parts of the songs, like when I read or listen to Leonard Cohen’s lyrics, there’s always a bit where I’m like, “What’s he on about, what’s this?” I was thinking about “Famous Blue Raincoat,” where he says, “Did you ever go clear?” and then I watched a Scientology documentary and I said, “Right, OK, it’s probably about that.” The things that are more mysterious or elliptical, you can ponder over those for an eternity, and that’s how I try and put those things into Maximo Park songs and my own songs.

AllMusic: Have you had any particularly enjoyable experiences with meeting your musical heroes?

Smith: One of my first ever records was Pearl Jam’s Ten. I’d seen “Jeremy” and “Alive” on my nana’s MTV, and the angst of Pearl Jam’s first records struck a chord with my 13-year-old self or however old I was. Years later, we played the Reading and Leeds Festival, and we were headlining the second stage, while Pearl Jam were headlining the main stage. Backstage, I met Eddie Vedder and recounted the story I told you, and he was saying, “Oh, that’s amazing, and look at you now, you’re headlining this other stage,” and he was really nice and gave me a hug. I was thinking, “If you’d told 13-year-old me that Eddie Vedder would give me a hug, I’d be extremely excited.” And I was extremely excited then, because if a band that’s played such a big part in your youth, the sound of your first kisses and that kind of stuff, to make contact with one of those people, is incredible.

AllMusic: Have you ever played an album for someone to see how they'd react to it, as a kind of test?

Smith: I do remember my first day at university, we were in a room together, myself and lots of other people from this honors course, and nobody knew who anybody else was. There was a guy in the room who had a Love t-shirt on, and I was a big fan of Love as well, and I had my eye on this guy, “He’s probably the only one in the room who knows who Love are, I’m going to go make friends with him, because I don’t know anybody else here.” Sure enough, that was the reason he’d worn the shirt, when we got talking later on, and eventually he confessed that that was his plan. One of the songs on my last solo record was about that particular meeting, “You were dressed in the t-shirt of the band who were best…” That’s what the whole of university was like, trying to find kindred spirits.