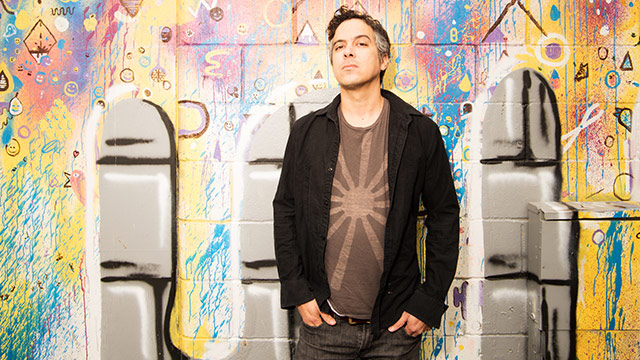 M. Ward hasn't been sitting still in the four years between 2012's A Wasteland Companion and More Rain, released today. In the intervening years, he put out another two She & Him albums with Zooey Deschanel and collaborated with Neko Case on her 2013 release. Case returns the favor by appearing on More Rain, along with Peter Buck and k.d. lang, and the album has earned four stars from editor Timothy Monger.

We caught up with Ward to talk about how he picks up inspiration in unexpected places, including a dream he had about Chuck Berry singing a song to a baby. We also get into the percussive properties of the acoustic guitar and how he heard mysterious blues icon Robert Johnson for the first time in his high school days.

AllMusic: When it's time to write, do you have a specific place where you sit down and focus?

M. Ward: There’s no specific place, and when you’re traveling and on tour, it becomes a necessity to be flexible as far as a place goes. The one thing I do need is a quiet space and some time on my own to devote, without many distractions. A clean, well-lit place, that’s all you need.

AllMusic: Did any of the ideas for these new songs come to you at unexpected times?

Ward: A lot of songs are written from hearing conversations that hearing people have. The way people communicate with each other is endlessly entertaining to me. I find a lot of humor in it, and sometimes that creates good lyrics. I get a lot of inspiration from reading the New York Times, there’s a lot of humor there, also, and a lot of tragedy, too.

AllMusic: Do they have to be real conversations or could it also be something scripted, like in a movie?

Ward: When it comes to people’s conversations, it could just be phrases that people use, it could be idioms or slang. There’s no end to the amount of material to be inspired by when it comes to language and how we use it.

AllMusic: Do you find it more interesting the further away from home you are, where people might use different phrasing or rhythms?

Ward: It’s equal, it’s not more or less. Sometimes being in a country where no one speaks English and I’m not able to understand the conversations is a great way of focusing on writing, because it’s almost like having noise-cancelling headphones. That’s a nice feeling sometimes.

AllMusic: When you write, do you hear all of the instruments at once or does that only come together once you get to the studio?

Ward: Because I start it on acoustic guitar, I’m very quick to hear the guitar as a percussive instrument, which it is, just as much as the piano has a percussive element to it, also. Acoustic guitar has a huge advantage in that way, the rhythms are inside the instrument in the same way that when you hear Robert Johnson’s playing, his rhythms are built into his guitar playing. So many elements of the production come out of playing the song on an acoustic guitar over and over again, you get ideas for rhythms, for the bass, and for string parts and vocal harmonies.

AllMusic: Can you remember the first time you heard Robert Johnson?

Ward: I remember exactly when I first heard Robert Johnson, it was in high school, I was probably a senior. A friend of mine had this cassette, and it had that photo of him, one of the only confirmed photos, and I was really drawn in. At first I didn’t really like the music, I thought it was kind of creepy and kind of difficult to understand what he was saying. The first couple of listens were, “I don’t need to hear this,” but then you come back to it and realize the genius of it, but it’s an acquired taste.

AllMusic: Do you have to be in a specific mood to want to hear those recordings? It's a very specific sound.

Ward: I could listen to his music at any time of the day and it would be pretty perfect.

AllMusic: You have said that making this record was sort of a way to escape the overall negativity that's thrown our way in the news. How do you strike that balance between awareness and maintaining any kind of positivity?

Ward: I read it every day, and my first instinct is always to say to myself, “I’m going to move to Canada or France or something.” It’s very disheartening reading the New York Times front page every day. After you let that initial repulsion subside, you start thinking of ways to digest this material. Everyone has their own secrets to sanity, and one of mine is to work, and that means music, and I use it as an escape, but it also helps put things in perspective sometimes.

AllMusic: Do you have dreams about music or musicians?

Ward: I’ve had Keith Richards and Mick Jagger and Chuck Berry show up in my dreams a few times. There’s a song on the new record called “Little Baby” that came to me from a dream I had of Chuck Berry singing that first lyric, which is “Everything’s old in the world except the baby,” and I just had this dream where Chuck Berry had this baby come up onstage with him, and he held it in his arms and looked the baby in the eyes and sang this beautiful song, so that turned into a song.

'More Rain' is out now on Merge Records