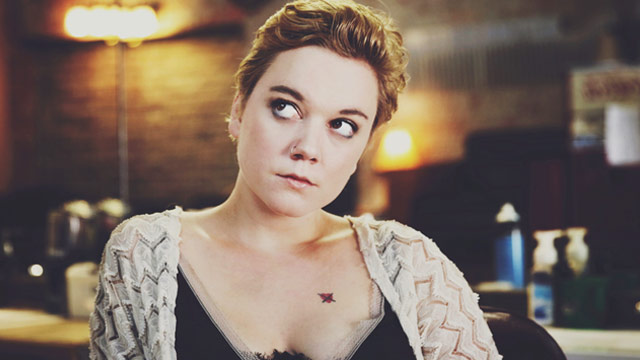 Our reviewers have been singing the praises of country and rock alchemist Lydia Loveless since her Bloodshot Records debut, Indestructible Machine, and the enthusiasm has only risen as she's matured on subsequent albums Somewhere Else and last year's Real. But tucked away alongside the full-length LPs was 2013's Boy Crazy EP, which featured five songs that editor Mark Deming hailed as "tough, confident and wise." Loveless recently reissued the EP as Boy Crazy and Single(s), expanded with B-sides and cover tunes, and just hit the road for a run of stripped-down performances, balancing some of these older, rarely-performed tunes with new, unreleased material.

We spoke with Loveless from her new home in Raleigh, where she's recently relocated after spending most of her life in Ohio, to discuss flying by the seat of her pants with this "reckless" tour, why she hates her cover songs and how she simultaneously draws influence from Britney Spears and G.G. Allin.


AllMusic: Putting this reissue together, did you revisit any of these songs or had you already spent enough time with them?

Lydia Loveless: I’ve actually spent zero time with them, which is funny. I’ll be bringing some of the songs out for my upcoming tour, because it would be stupid to not, but especially with covers, once I record a cover, I hate it, so I don’t do those anymore. And the other songs are from a different time in my life, although some of the B-sides, I still perform. But it’s not something I really felt a need to sit down with, it’s more just everyone really wanted that record on vinyl, so it was time to do that.

AllMusic: If it was up to you, would you let that early music just fade away?

Loveless: I enjoyed revisiting the artwork, that was fun, and I know a lot of people really like this record. It’s not a cringe-worthy one to me, I still like the songs, but I don’t necessarily play them every night. It’s not like a burdensome record to me, like maybe my stuff before that might be, but it’s more, especially right now, having released Real and starting on new material, I barely have the headspace to listen to other people’s music, so it’s hard to listen to my own.

AllMusic: When you put these songs back into the live set, are you going to rearrange them to keep them interesting for you?

Loveless: It will be different, because I’ve never done a stripped-down tour, so everything is going to be different, it’s all going to be new in that sense. It really is seat of the pants, I wish I could say I’ve been sitting around working on it. My guitar player is also coming, so we’ll probably do some keyboard stuff, and I really prefer to just let those things happen and not really overthink them.

AllMusic: Are you more adamant about rehearsals when you tour with the full band?

Loveless: With the whole band, I do like to rehearse, just because there’s five people, so it almost seems rude to not give everyone a chance to do that. But when you’re doing intimate, stripped-down stuff, you can only benefit from a little spontaneity.

I’ll definitely have certain songs that I’ll be bringing out, and definitely do some new stuff, which is a big part of this tour, is taking a writing tour, because I don’t do well sitting around. I don’t think it will be so unplanned that I’m like, “I don’t even know what we’re doing tonight!” but I definitely switch up my setlists every night, anyway, I’m not someone who just has 10 songs and that’s all we do. It won’t be too much different from my general M.O., I guess.

AllMusic: What is a "writing tour"?

Loveless: I’ve always relied on audiences to give me feedback when I’m working on new stuff, and I think tour is a lot more inspiring than being home, I’m not really someone who does well with holing up in a house, I’ve always done a lot of writing with Todd, my guitar player, who’s coming with me, so it will probably be an opportunity to work on new stuff. When you’re in a whole band situation, you can’t really do that, not everyone can be that spontaneous onstage, it seems easier when there’s only two people to just go with it.

AllMusic: Does it feel weird to not be doing much preparation for this tour?

Loveless: It is kind of weird, I was just thinking about that, especially with moving away and not getting together with Todd until the day before. Mostly, I think that’s the purpose of this for me, to not really be planned, and for the past couple of years, I’ve been really uptight and choking the life out of myself, and I think it’s going to be good to take a guitar and pedal board and see what happens.

AllMusic: When did you realize you were choking the life out of yourself?

Loveless: I always suffer from some semblance of writers’ block after a record, but after Real came out, I just wanted to feel proud of it, and instead I felt really depressed and awful, “What am I going to do now, what’s the next step,” and only in the past month or so have I realized that I don’t have to rush it or force it, and creativity doesn’t really work that way. What usually helps is being a little reckless and not so planned out, so I guess we’ll see.

AllMusic: Are you hoping to have a certain amount of writing done by the end of the tour?

Loveless: I’d be lying if I said I didn’t have expectations, but I guess I’d rather enjoy being creative and enjoy going on this tour than feel like if I don’t have 15 songs that are perfect, I’ll kill myself or whatever, like I might have said a year ago.

AllMusic: There are several cover songs in the reissue. I have a theory that when it comes to covers, you want to pick songs you like but aren't overly-attached to.

Loveless: That’s pretty accurate. The most miserable studio experience I’ve ever had was recording Prince, and not because of anything anyone else did, but because it seemed really wrong, and it wasn’t really my idea, it was presented to me as not something I had to do, but was strongly advised to do, and I just felt totally humiliated trying to record a Prince song in the studio, it felt really pointless to me. I do cringe at that cover, and I don’t really know how to play that song, so that’s saved me from ever having to perform it live. But I think I like to pick things that I don’t feel so reverent towards.

AllMusic: Would you be better now at saying "no" to something you didn't want to do?

Loveless: Yeah, I think I’ve always been in that position, but I’ve become a lot more assertive as a human. When I was younger, I just wanted to make everyone happy all the time, and pretty much since my birthday a couple of months ago, I’ve been like, “I fucking don’t care about anyone’s opinion.” I’m not sure if that will prove to be fruitful or a detriment, but we’ll see.

AllMusic: Your cover of "Alison" sounds like it's you by yourself in one take.

Loveless: Yeah, that’s what that was. That song, I was just covering that live anyway, and my label was at one of the shows where I did it, then they asked me to record it, and it’s a really important song to me, my mom listened to it the whole time I was growing up, and it’s such a simple cover of it that it didn’t bother me to do that. But a lot of that stuff is just when I’m on tour, I always do a solo set in between band sets, and sometimes it’s fun to throw a cover in there, so that’s how that came into the world.

AllMusic: Were you in and out of the studio in ten minutes?

Loveless: I think it probably took like half an hour. I was sick and I just did it in a couple of takes. On the Justin Bieber cover, I had a cold the day I went into the studio, and I had to leave and come back.

AllMusic: You do a cover Kesha's "Blind," when did you start to appreciate her?

Loveless: What happened to me with Kesha was discovering her as a person, because I probably wasn’t super drawn to her first record until a friend of mine was like, “You should really read some interviews with her, I think you’d really like her,” and she seemed like an actual artist, and I started YouTube nerding, tracking down her old stuff that’s a lot more singer-songwritery, and I enjoyed that, and watching her grow as an artist has been really exciting. She just seems really authentic, and I can even see that through the first record’s chintziness, but it was also just fun, I’ve always liked seeing her live, even when it was overdone, it was just enjoyable to go dance around and get covered in glitter.

AllMusic: On your Facebook page, you have G.G. Allin and Britney Spears listed side-by-side as influences. Was that intentional?

Loveless: I was probably like 19 when I filled that out, but I think those still stand. I always liked pop music, but I also like really unvarnished bullshit, too, so I guess those two people might sum me up. Hopefully I’m nothing like G.G. Allin, but I’ve had my moments. There’s the person who wants to do the right thing and the person who always does the wrong thing.