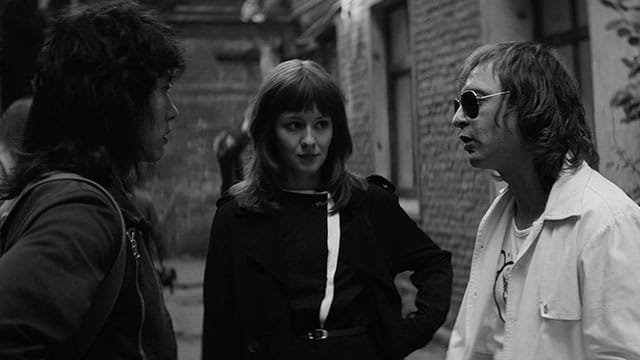 For Russian music fans (or fans of Russian music), the band Kino was a guiding light and reflection of the turbulent, uncertain periods of perestroika and glasnost. Fronted by the charismatic Soviet-Korean musician Viktor Tsoi, Kino earned acclaim throughout the 80s, until the band ended with Viktor's death in car crash in 1990.

The new film Leto (Russian for "summer") dramatizes Tsoi's pre-fame years, highlighting his friendship with Soviet rock musician (and student of Western rock) Mike Naumenko, who would serve as Tsoi's mentor. In Leto, Naumenko sees in Tsoi someone with tremendous talent, but also with the innate star power Naumenko lacks. Tsoi also falls for Naumenko's wife, Natalia, leading to an uneasy love triangle. The film is scored by Kino's early music, as well as fantastical interpretations of songs by Lou Reed, Talking Heads, and David Bowie.

We spoke with Michael and Lily Idov, who wrote the screenplay for Leto with director Kirill Serebrennikov, about avoiding music biopic cliches, how to present music that may be unfamiliar to non-Russian audiences, and government influence over the arts. Leto is out now in New York, with a Los Angeles release scheduled for June 21.

AllMusic: There's a scene in the film where a band awkwardly sits down with a state official to explain its lyrics. Is that how you feel now having to explain your movie to me?

Michael Idov: Not entirely. What they're doing in that scene is that their lyrics are checked for their suitability for performance. Whenever you wrote a song, in order to publicly perform it in the Soviet Union, you had to get approval.

Lily Idov: Not just a song, for anything.

Michael: Even a stand-up comedy routine. They're basically being auditioned to join the Leningrad Rock Club, which is an official sort of KGB-curated kind of outlet for young people.

AllMusic: Artists often hate having to explain their work so clearly.

Michael: We had a lot of fun writing that scene, but it's also our own nightmares come to life. But it's also very funny, because we placed it in the café and there's this comedy routine where more and more of them are being sent away to get drinks. And the actress playing the bureaucrat is one of my favorite Russian character actresses, Yulia Aug, she's almost like the Meryl Streep of Russia at this point, she does an amazing job playing this bureaucrat applying standards of high poetry to punk rock lyrics.

AllMusic: As you were writing the screenplay, you were clearly aware that Viktor's name and his music weren't widely-known enough to be able to coast purely off of audience recognition. There is no "We Will Rock You" to fall back on.

Michael: Believe me, even for the Russian audience, it would have been easier to include some of Kino's later hits, which everyone knows and loves. But it's a willfully perverse idea; imagine making a David Bowie biopic and stopping before Space Oddity, and it's just his early hippie stuff. That's exactly what we did in this one. The producers had the rights to Kino's entire catalog, and to their endless credit, they went with this defiantly art house idea of using only the songs that Viktor had written at the age of 18 and 19, and not any of them are all that well-known to Russians.

Lily: There's a few songs that you hear that had never even been recorded properly.

Michael: Yeah, we tried to create a situation where they'd be revived from old bad live recordings. This was designed to be the opposite of the Bohemian Rhapsody-style biopic where every scene is basically a giant wink at you for knowing what comes next. The most painful scene in that was when they brought in Mike Myers to specifically deliver this meta-meta joke about Wayne's World. Obviously we wanted nothing to do with this sort of thing, but to just tell a story about these people before they were stars and make it into a poignant love triangle.

Lily: We really tried to write a universal story about love and friendship and freedom.

Michael: I think that it helps knowing that these people are real and that one went on to huge fame while the other went on to live the rest of his tragically short life in semi-obscurity, but it's not crucial to the movie itself, you can just look at it as kind of a new wave film about a bohemian love triangle.

AllMusic: There are these fantastical moments throughout the movie, like when riders on the city bus start singing "The Passenger" or the scene set to "Perfect Day." Were those in the screenplay?

Michael: That is all Kirill Serebrennikov, the director. It's his movie, and our script, while it had all the main events and main scenes, the biggest difference is that our film wasn't a musical. It was a strictly backstage musical, you'd only hear music when it was performed or played. So it's Kirill's amazing theatrical genius that spun this movie out into this musical fantasia.

The choice of the song was mostly his, as well. I'm afraid if I were choosing the songs, or Lily, we would probably be tempted to go with something more obscure, but I think Kirill was exactly right. This was the only area of a slight disagreement for us in the entire process, because I feel like Trainspotting sort of owns "Perfect Day" for the rest of time, but I think he was right to use the songs that people know and have an emotional response to, and more importantly, use the songs that our characters' real life prototypes actually listened to and loved and used to inspire them.

AllMusic: When did you learn that he was going to take that approach?

Michael: We did a draft together with Kirill, so we weren't surprised, but then again we really did see the entire movie in its finished version for the first time when it premiered at Cannes, and watching it on one of the world's most famous movie screens was kind of an insane experience that might never be replicated. And it's downright tragic that he was not there to see that, because he was under house arrest at the time. [Serebrennikov has since been released, but is awaiting trial for fraud related to a state subsidy]

AllMusic: There's a detail about Mike Naumenko transcribing rock songs in English and filling notebooks with the lyrics. Was that something you came across in your research?

Michael: That was Mike, he actually did that, this is a documentary detail from his life. He was kind of a rock and roll scientist, almost, he cataloged and studied all this. That's part of this Mozart and Salieri thing.

Lily: And not everybody spoke English, so he was translating lyrics and showing it to other musicians.

Michael: He was kind of a rock and roll educator, and this is why we thought it was so cool that he's the guy who knew everything about everything, and yet he tragically lacked that extra bit of je ne sais quoi to make it, and he sees this guy, Viktor, who's 18 years old, and doesn't know anything, but all he has is it, this thing that Mike lacks, and he's absolutely a born star, and instead of being envious, he just sacrifices himself to become his mentor. We really thought it was a beautiful story.

AllMusic: There's a video I go back to every so often of Putin singing "Blueberry Hill," and while I was watching the movie I was trying to bridge the gap between this sincere, exciting youth movement and something so staid.

Michael: We have to make peace with the idea that the boomers and the generations that come after that have completely erased any notion of counterculture. As soon as anything hits the underground, five minutes later it can be used in a presidential campaign, and that's the new reality. I used to marvel at these little bits of, "Oh my god, Hillary Clinton's campaign adviser listens to indie rock," for example, like he's a Pavement fan or something, but it's 2019 and there's no distinction anymore. Everything is everything, there's only good and bad.