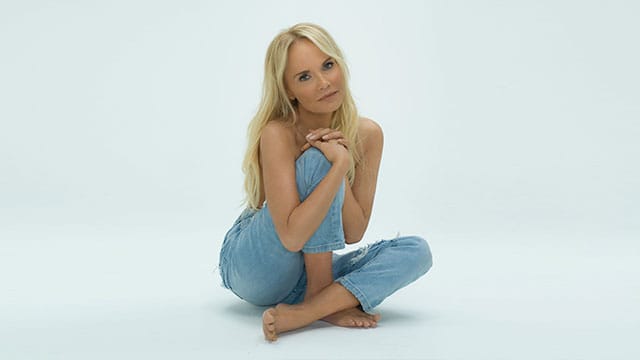 From Oklahoma to Broadway, Kristin Chenoweth's trajectory has made her a hero to current and lapsed theater kids, a vast LGBT fan base, and those who appreciate a huge voice coming from a deceptively pint-sized performer. On her latest album, For the Girls, Chenoweth pays homage to her heroes, putting her own flavor on tunes made famous by Judy Garland, Lesley Gore, Dolly Parton, Patsy Cline, and other dynamic women. She also enlisted a few A-list friends, like Ariana Grande, Jennifer Hudson, and Reba McEntire to tip the scales even further.

As she did for her 2016 album, The Art of Elegance, Chenoweth will stage a series of special performances on Broadway in November to highlight the songs on For the Girls, featuring guest appearances and storytelling about what makes these songs special.

Chenoweth gave AllMusic a sneak peek of the stories behind the songs, sharing her insights on how some of the songs have evolved for her over time, if she was scared of Jennifer Hudson pulling another Dreamgirls and upstaging her on her own record, and knowing when to hold back and when to "hand it out."

AllMusic: There's a difference between singing other people's songs for yourself and putting them on a record. When it was time to get professional, did you run into any unexpected roadblocks with these songs?

Kristin Chenoweth: There's a bunch that scared me to death. One that really brought a challenge was Patsy Cline's "Crazy." I kept hearing her voice as I was doing it, and I kept hearing her phrasing, and I kept imitating her. My producer said, "Kristin, stop doing that," and I said, "I cannot do this song, I'm scared to do it, all I hear is her voice and her phrasing," so we put it away for about six months. I didn't listen to Patsy, which is really hard for me to do, but I just had to figure out what the song meant to me and how I wanted to phrase it and how I wanted to put my stamp on it.

AllMusic: If you're going to do it exactly like her, then what's the point?

Chenoweth: "What's the point" for all of these songs. Frankly, I was scared of each one of them, but there are some lanes I'm more comfortable in, like Judy and Barbra, I know my way around making those songs my own. But singing with Dolly Parton was -- and everybody says this about her, because it's the truth -- but it's transcendent. When I sent my version to her, and she sent hers back, I thought, "She's managed to make the song totally different." She helped me put my stamp on it by singing it herself in a different way. So the lessons keep coming my direction on what you're learning, how you're learning it, what you want to say through your music -- do you want to do an imitation record or do you want to do your version?

AllMusic: Many of these are songs you've loved since you were a kid. Have any of them changed their meanings for you over time?

Chenoweth: So many of these songs have had that effect for me. "Will You Love Me Tomorrow?" kept popping up when I was choosing songs. When I was younger, I would say, "I don't get that, why do I care if a man's still going to love me tomorrow, I'm not going to ask that question." I was always kind of scrappy and I knew that if I was going to make it, I was going to make it on my own. Now, all of the things that come up in that song are really softer, more feminine questions for me. I've been there now, and I've wanted to know, after I've let someone see my bare self, is he going to accept me? And I think that's really the question of the song; is he going to accept the good, bad, and the ugly? Will he still love me after everything? So that really changed for me, and I was like, "Yeah, I've got to sing that song." And it ended up being one of my favorites on the record.

Another song in that same vein, there's a Judy Garland piece called "The Man That Got Away," and my younger self was like, "How could you let a man get away if you love him?" Now, what it means to me is that there are good guys who come into your life, and either I wasn't ready or they were not ready, and that, to me, is what the song is about. Neither person was ready at the same time. So it's not the man who got away, but more the man who slipped away. There's some pretty tough lyrics in there, like, "Every trick of his you're on to, and fools will be fools, but where's he gone to?" You wake up one day, and the guy that you love is not there, and you were part of that reason why.

AllMusic: Do the lyrics need to be great for you to fully appreciate a song?

Chenoweth: You know at night when you just need to check out and you watch reality TV? There are songs that do that for me, which shall remain unnamed, but they're dessert, they're just fun. Then there are songs that are meat and potatoes, that give you the vitamins that you need. Those are the songs I chose to put on this record. There's nothing wrong with needing to check out and hearing a song that doesn't really go too deep, but at this point in my life, I'm probably not going to sing those songs.

AllMusic: Jennifer Hudson is someone who seems like she could upstage practically anyone, but you don't restrain her at all on "I'm a Woman."

Chenoweth: I took a note from Dolly many years ago, when she did a record with Emmylou Harris and Linda Ronstadt, three very different talents, and three very different voices, but somehow it worked. When it came to "I'm a Woman," I said, "I'm Peggy Lee, she's who originated the song, I can relate to that." I can't do Aretha, I don't have that sound, I can't do it. And I told my producer, "I'm not doing 'I’m a Woman,'" and he said, "Peggy Lee, I know, I know."

I can put the soul into it, but Jenny's voice is a completely different sound that I admire and adore, and same for Reba. Reba has soul in a different way. He goes, "Just think of it as three soul sisters, three girls who have different kinds of soul, singing the song." And once he gave me that permission, I was like, "Oh yeah, right." So I'm representing the original source a bit with Peggy Lee, and Reba's going to do her strong amazingness that's only her sound, and Jenny is going to sing her face off in the way that she does. And when you want to celebrate women and you feel confident in what you do, you should have no problem with people who have different sounds, different tastes, different lanes, than yours, because we can all come together.

I've never been more proud to have all of these unique sounds, just like the songs are unique. When we recorded "I'm a Woman," we each did a couple of versions, and my producer tried to have me in there first, and I said, "No, no. Let J-Hud start it, then let Reba end it." He goes, "You have to start or end the song," and I said, "No, I do not, I'm fine being squashed in the middle of genius." So we rearranged it and put it together that way, and I think it's the winner from the record, I really do.

AllMusic: With all your stage experience, you're used to projecting your voice through a concert hall. When you get in the studio, do you have to scale back on the intensity for it to sound right on the album?

Chenoweth: It depends on the song and the album I'm making. On the first record I made, I gave everybody what they wanted from me, so it was more classical in nature. What I did on this record was I chose the moments that I wanted to go big, and I chose them carefully. It is a different beast, being in a recording studio, but I'm not going to sing "The Man That Got Away" pianissimo, I'm not going to sing it quiet. It has to build, there's a story to it, it's very theatrical. Judy Garland is the originator of it, so I'm going to give it what I've got.

But there are other songs, like "Will You Love Me Tomorrow," which I view as more of an introspective song, a question. So I tried to be as wise as I possibly could about when I handed it out and when I didn't. When you hear Lesley Gore's "You Don't Own Me" with Ariana Grande, it is orchestrated, like "Desperado." These are my stamps and my way to say, "These have been done, I know the original artists would want me to pay homage to them, tip my hat to them, but also do me." So in some cases that was handing it out.