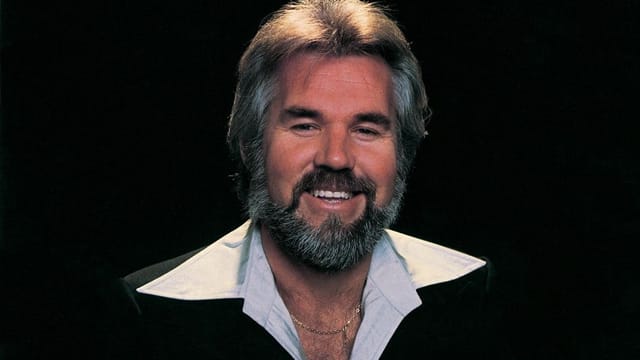 There are hundreds -- more like thousands -- of successful country artists who devoted considerable time and energy trying to cross over to the pop charts in search of greater stardom. But Kenny Rogers, who was one of the biggest and most enduring country stars of his generation, scored bigger than nearly all of them by doing just the opposite. Rogers, who died at his home in Sandy Springs, Georgia, on March 20 at the age of 81, first hit the pop charts in a big way in 1967 with his group the First Edition, releasing the psychedelic pop nugget "Just Dropped In (To See What Condition My Condition Was In)," which peaked on the singles charts at No. 5. But by the mid-'70s, the First Edition's stardom had dried up, and Rogers, stepping out on his own, thought the country audience might be more receptive to his style. He was right: In 1977, he released "Lucille," which became the first of 21 songs he'd take to the top of the country singles chart.

One of the keys to Rogers' success as a country star was that he didn't change his own style so much as he just adjusted the material and the production of his recordings. "Just Dropped In" may have given Rogers a career, but it was also an anomaly in his catalog, a catchy, well-executed but ultimately silly exercise in mainstream psychedelia. (Randy Newman's comment that America's "A Horse With No Name" was about a kid who thought he'd dropped acid but really hadn't could just as easily apply to "Just Dropped In.") It was the smaller hits the First Edition would score after that, most notably "Ruby, Don't Take Your Love To Town" and "Something's Burning," where Kenny Rogers first found the voice that would make him a superstar. The slightly rough but inviting warmth of his tenor instrument could speak directly and honestly to the listener, a sound that was ideal for story songs and sensitive love songs that subtly but surely drew folks in. Tellingly, Rogers once said, "Country music is what country people will buy. If the country audience doesn’t buy it, they’ll kick it out. And if they do, then it becomes country music." With "Lucille," he cracked the code of what the country people wanted to hear, and it turned out there were a lot more of them than anyone expected.

But if there was any lesson to be learned from studying the arc of Rogers' long and impressive career, it was that Rogers had a way of finding his way into nearly any context he pleased, that his talent wasn't strictly bound to one style. Born in Houston, Texas on August 21, 1938, Rogers was one of eight children in a family that was a long way from rich. He first began performing in the church choir and in school choral groups, and when a 12-year-old Kenny saw Ray Charles on stage, his interests and ambitions changed. In high school, he joined a doo-wop influenced vocal group called the Scholars, who gained enough of a following to cut a few 45s, and in 1958, as Kenneth Rogers, he cut a solo single, "That Crazy Feeling," that managed to score some regional airplay and got him a spot on American Bandstand.

Not convinced rock & roll was his ticket to success, Rogers picked up the upright bass and joined an upbeat jazz combo, the Bobby Doyle Three, who managed to land a contract with Columbia Records, releasing the album In A Most Unusual Way in 1962. After the trio broke up, Rogers made his way through the record business until he joined the New Christy Minstrels in 1966. While the Minstrels had been one of the most popular acts in the mainstream folk boom early in the decade, by the time Rogers joined, their success was on the wane, and after about a year, he and three other members of the group -- Mike Settle, Terry Williams, and Thelma Camacho -- quit to strike out on their own. With the addition of Kin Vassy, they formed the First Edition. It wasn't long before they signed with Reprise Records, cut "Just Dropped In," and watched their careers take off.

While the First Edition enjoyed considerable success for a while (they hosted their own television variety show for several years, and cut one of the most interesting albums of Rogers' career, the rootsy and ambitious 1972 concept album The Ballad of Calico), it's hard not to see them as Rogers' first major apprenticeship in music, where he learned how things were done in the big leagues and what did and did not work for him. After Rogers became a major star in the '70s, he published a book, Making It with Music: Kenny Rogers' Guide to the Music Business, that showed he learned a lot and forgot very little on the road to stardom.

Once Rogers and producer Larry Butler brought him the country market with "Lucille" and gave him the signature song that would define him with "The Gambler," Rogers became that rare artist who could comfortably move back and forth between the country, pop, and adult contemporary charts, making songs that felt comfortable in each format without alienating his fans in the others. Not many people could duet with Dottie West and Dolly Parton while also successfully collaborating with Lionel Richie and Robin Gibb, but Rogers did it with ease, lending the same authority and low-key charisma to everything he sang.

As Rogers became a frequent visitor on radio and the record sales charts, he became a cultural presence who could seemingly pop up anywhere. He could star in movies (Six Pack) and a series of successful television films (playing Brady Hawkes, the Gambler) where he showed the unpretentious charm that showed in his vocals could also work on screen. He could publish novels and children's books and not seem out of his element. He could play alongside the Muppets and hold his own. He could appear as himself on Reno 911! and leave the inept cops so starstruck they were all but paralyzed. He could play the Glastonbury Festival in the UK with Lionel Richie, and sit in with Phish at Bonnaroo after playing his own set. He could even sell roasted chicken, and did pretty well with it for a while.

Despite some regrettable plastic surgery that was much commented upon when he was in his 70s, in the last decade of his life, Rogers remained productive, releasing what would prove to be his final album in 2013 and announcing a farewell tour in 2015 that was slated to end in 2018. Health issues led Rogers to cancel the final leg of the tour, after playing what would be his final shows in December 2017. Like more than a few veteran country stars, Rogers had the sort of audience that was endlessly loyal and never failed to show their support, and the quiet of his last years was somehow out of character. But nearly sixty years after "That Crazy Feeling" landed him a spot on American Bandstand, no one could argue Kenny Rogers didn't deserve a rest. Like the Gambler, he was a legend who knew when to fold 'em, and it's likely people will still be talking about that game for a long time to come.