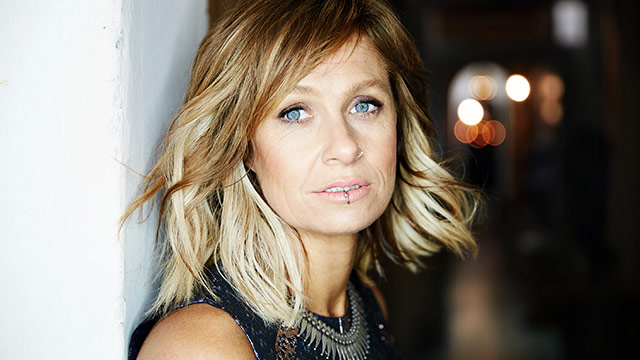 Dragonfly, the first double album from Australian country musician Kasey Chambers, didn't start out as such an ambitious undertaking, but when a prolific writing spurt and two fruitful recording sessions yielded twice the songs she needed, Chambers made the call to put them all out at once. The album found Chambers embracing her country roots as much as ever, while also delving into rock, gospel and blues for a collection that earned four stars from Mark Deming, who called the album "heartfelt from first song to last."

Chambers is now on the road in the United States, where new songs like "Ain't No Little Girl" and the autobiographical "Talkin' Baby Blues" have become integral parts of her set, alongside standbys like "Not Pretty Enough" and "The Captain." We spoke with her during what will be the second of four back-and-forth trips from Australia to North America this year, and discussed her vagabond lifestyle, the chaos that she feeds on to help her creativity, and the lightest and darkest songs on Dragonfly.

AllMusic: The album is comprised of two distinct recording sessions that make up each disc. Was it always obvious to release them as one package?

Kasey Chambers: I was going to do these two separate sessions and then piece it together and have one record, because I thought I’d get five or six songs from each session. But we ended up with a lot more songs, and I got to this point where I was like, “I have to let go of some songs or have two separate releases,” and I really wanted them to all come out at the same time, but I didn’t want to lose any of those songs. It wasn’t something I set out to do in the first place, but the first session I went into, we ended up with 11 finished tracks, and so I said, “That’s most of the record,” and the same thing happened on the next one.

AllMusic: To be 11 albums into your career and be at your most prolific, you must be feeling pretty inspired.

Chambers: That surprised me, I reckon I had more songs for these records than I’ve ever had in my life. I had all these songs that I didn’t know would make a record, and they’ve ended up being some of my favorites. I don’t always know, it’s good to have other people’s opinions. I was never going to put “Talkin' Baby Blues” on a record at all until Paul heard the song, and he said, “We have to put that on the record.” Now it’s one of those really important moments of the record that sums up my life a lot, and I do it live every night, and it’s a massive part of the show.

AllMusic: And that song features the line "Pass me my martini, James Gandolfini."

Chambers: I think it’s the only thing that rhymes with “Gandolfini,” but it was obvious that was going to have to be in there. As I was writing it, I said, “This is the dumbest line, but it rhymes and I’m going with it." It’s such a crazy story, the whole song, but it’s so true and so bare, putting everything out there in that song, but if you put a humorous spin on it, it doesn’t feel quite as exposing as if I’d sat there and told everybody everything.

AllMusic: That could become your version of people shouting "Leonard Bernstein" along with the R.E.M. song.

Chambers: Hopefully it will make me as much money, but I don’t like my chances.

AllMusic: The on the opposite end of the album's spectrum, you have "Jonestown."

Chambers: From “Talkin' Baby Blues” to “Jonestown,” it doesn’t get any farther apart than those two songs. It’s a story that’s been in the back of my mind, not particularly to write a song about, but that story did always intrigue me, as morbid as that is. I saw a documentary about it years ago and got a little more insight into the story and how the whole start of that cult was actually such a positive kind of thing, and then turned negative to such an extreme. I guess that was part of the intrigue of it, how something with such good intentions can then turn into something so devastating, people getting carried away with power.

I find it intriguing because I don’t fully understand how people’s minds can get taken over so much to do things like that. We wanted to write the song from the point of view of understanding what it must be like, it’s from the point of view of a man in the cult who sees it in such a positive light and everything they’re doing is such a positive thing, and I find that intriguing. I don’t have any more of a connection to it other than that I find it fascinating that it can actually happen. We wanted to put ourselves in that position in that song to try to understand it better.

AllMusic: You're back in the states now. Have you played here enough that you have friends in every town or do you get more time to yourself when you're here?

Chambers: It’s definitely fewer than in Australia. I just did a trip to Africa, where I did a music safari kind of thing, and half of the people who did the safari with us were Americans, so every few gigs I seem to be running into somebody that I met in Africa, which is so weird, to come to their town after having been through this incredible experience together, so that’s been nice.

I think I’m in the perfect job for my personality, I do love being around people and meeting people. I get really bored of my own company, I only like being on my own when I’m songwriting, and I’m even able to do that when I’m around a lot of people. I have three kids, so I had to teach myself to be able to write around a bit of chaos, because I don’t have a lot of quiet time in my life. I’m either on a bus with a bunch of people or home with screaming kids that want to be fed, so I write around that, as well. For the most part, it works pretty well, I really like chaos, I like noise and being around people all the time. I think I picked the perfect job for my personality.

AllMusic: Was that aspect of your personality evident early on?

Chambers: I think I’ve always been a bit like that. When I was younger, I lived quite an unusual lifestyle, living in my car with my family, and we traveled around the outback of Australia and had quite an isolated upbringing where we didn’t see a lot of other people, but we were together all the time as a family, so that’s why I’m able to work so closely with them now, because my dad’s in my band, and my mom’s on the road in Australia, I bring my kids, my brother is my manager, so we all work together now, and always have, so that was something that was always around from when I was very little. Music was such a big part of our lives, so I think it’s just inevitable that I was going to have music around family and travel and all of those things, from a really early age.

AllMusic: Music was a part of your life practically from birth, was it the same for your kids?

Chambers: My nine-year-old has been coming onstage with me a lot, and my 15-year-old just played in front of people for the first time. I’m happy and supportive if they choose to be in music, but I’m happy if something creative is in their life in some way, shape or form, I think it’s important to have, even if it’s not about sharing it with other people, it doesn’t have to be music or anything like that, I think it’s really important to have a creative outlet in your life in some way. I encourage that in all my kids, and hope that they find something creative, and if it’s music, that’s great. My nine-year-old is showing that he likes being onstage, and that’s important to him, so I love that. It was a big part of my life growing up, so I like that they’re growing up with it around them as an option.

AllMusic: Do you ever try to introduce them to some music you love and it just doesn't click for them?

Chambers: I do that a lot, but it’s usually one of my songs, and they’ll be like, “Eh, whatever.” That’s pretty normal. My nine-year-old, his favorite song on my new record for a long time was “Jonestown,” and he doesn’t know anything about the story, he doesn’t know what it’s about when he’s singing along to it, but that one resonates with him, and he connected to that song. I was like, “I don’t think I’m ready for him to know what that song is actually about, I’ll just leave it as a song that he likes.”

AllMusic: Music can be a useful tool of rebellion in your adolescence, but since you were raised in a musical family, was that still an option?

Chambers: I just wanted to listen to anything that my dad hated, and I had a couple of years that were all about Metallica and Anthrax and all these bands that my dad hated. But then at the same time I was doing gigs with him and we were doing Emmylou Harris and Gram Parsons songs together. So I wasn’t very convincing when I was going through the rebellious stage, but I did have it. Most of the music my kids like, I kind of like, too. We love Ed Sheeran, so that’s great, and he sings on my new record, which was a kick for my kids, and we listen to Eminem together. I’m glad I don’t know what half of it is actually about.

AllMusic: How deep did you dive into the metal world?

Chambers: It was definitely a phase, but I did genuinely get into that music. I did get to a point where I learned to appreciate the music beyond just trying to piss my dad off. My dad took me to see AC/DC when I was a teenager, and I was like, “My dad is actually pretty cool.”

AllMusic: Do any of those songs still come up when you're listening on shuffle?

Chambers: Yeah, they do, every now and then there’s a Megadeth song that comes up in between Bob Dylan and Neil Young. I let them play; I don’t sit down and listen to full albums too much anymore, but I like it when it comes on.