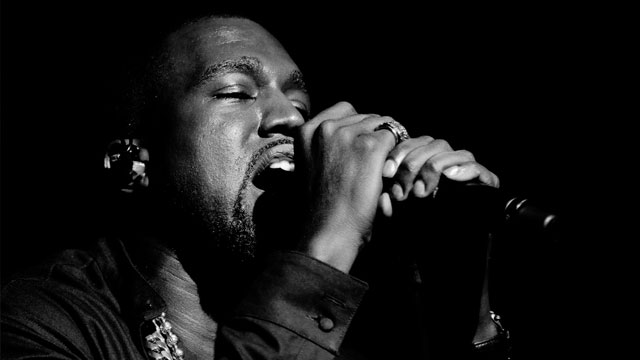 ★ ★ ★ ★
Everyone professionally involved with the creation of Kanye West's sixth solo effort was sworn to secrecy, and with no preorders allowed, plus the news that producer Rick Rubin was still tinkering with tracks seven days prior to the drop, this instant, no-singles, anti-hype album got pre-release hyped on an Olympic scale. Think of the roll-up as a revolutionary blow against the empire or the supernova ego of West in full effect, and while it's probably a little of both, Yeezus the album is a lot of both, with good taste and bad taste both turned up to 11.

This aggro-industrial earthquake with booming bass and minimal synths balances groundbreaking hip-hop lyrics ("New Slaves" is a bizarre, layered concept clash where high fashion, slavery, and "I'd rather be a dick than a swallower" all collide) with punkish, irresponsible blast-femy (during the draggy, trap track "I'm in It," West's melodious and melancholy voice shouts its dreams to the multitude, pleading "Your titties, let 'em out, free at last/Thank God almighty, they free at last" as if civil rights and booty calls were equally noble quests), and it all works in an astonishing, compelling manner. It's as if West spent the last year listening exclusively to Death Grips and Chief Keef and all the political, social, and musical contradictions became his muse, inspiring moments like the Keef and Bon Iver meet-up that fuels the mile-high hangover number "Hold My Liquor." "Blood on the Leaves" is recklessly bold as it uses Nina Simone's performance of "Strange Fruit" under its snide tale of ex-girlfriends, groupies, and date rape drugs; then there's the obviously volatile "I Am a God" ("Hurry up with my damn massage!/Hurry up with my damn ménage!"), which still outdoes its provocative title with a swelled-head manifesto plus an unexpected, Magic-Mike-meets-Aphex-Twin boom production courtesy of Daft Punk. The closing beauty called "Bound 2" finds veteran singer Charlie Wilson reuniting with that Gap Band bassline but in chilly, new wave surroundings, but the most spellbinding juxtaposition on the album comes on first as claustrophobic electro-clasher "On Sight" offers "Black dick all up in your spouse again/And I know she like chocolate men/Got mo' n*ggas off than Cochran" -- stunning because Kanye is family now with the OJ Simpson trial's "Dream Team," seeing as how he's dating Kim of the Kardashian family and the couple welcomed a child three days before the album's release.

Coming from the man who jumped on-stage and grabbed Taylor Swift's VMA award, or called the American President a racist during a nationally television charity event, this angry, cathartic, and concise album (punkishly running 40 minutes), and its unconventional road to release seems like a personal quest for the next provocative, headline-making, and unforgettable fix. That's an unfathomable thing for most and irritating for many, but it's Kanye's unbelievable reality, so complaining about Yeezus being unrelatable is like complaining the sky is untouchable. At least he has decided to indulge his giant hunger with the help of art, and if anything, this is the moment he becomes a swashbuckling Salvador Dali figure, chopping down all that's conventional with highly imaginative work and crass, attention-grabbing attitude. Unlike Dali's separate delivery of the two, Yeezus is an extravagant stunt with the high-art packed in, offering an eccentric, audacious, and gripping experience that's vital and truly unlike anything else.