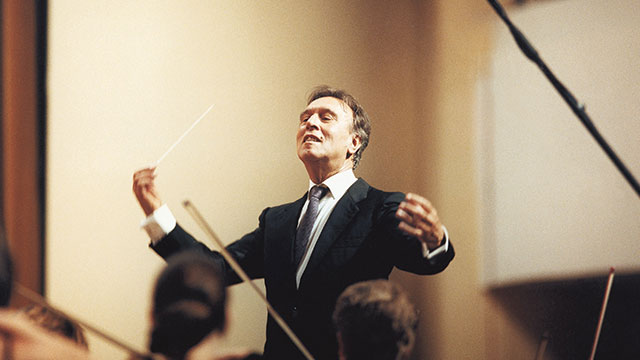 Among the classical artists who passed away in 2014 were several great conductors and singers. From those steeped in the traditional forms to pioneers of the avant-garde, from band leaders to vocalists to composers, here are brief introductions to the lives of these departed artists.

Claudio Abbado (June 26, 1933-January 20, 2014)
Claudio Abbado was an exciting conductor who relished the beauty of tone, his extensive discography includes the complete symphonic works of Mahler, Schubert, Ravel, Tchaikovsky, Mendelssohn, and Beethoven, and dozens of other recordings. He held a number of prestigious posts, any one of which would be a crowning achievement for a conductor, and his musical presence in both concert and recordings left an undeniable legacy of excellence.

Gerd Albrecht (July 19, 1935-February 2, 2014)
Gerd Albrecht was best known for his interpretations of late Romantic and 20th century German repertory. Albrecht won recognition for his conducting of the Czech Philharmonic, the Yomiuri Nippon Symphony Orchestra, and the Danish National Radio Symphony Orchestra, among others, as well as for television productions, and writings, which included books on music and collections of fairy tales for children.

Robert Ashley (March 28, 1930-March 3, 2014)
A prominent figure in the avant-garde, Robert Ashley was influenced by Gordon Mumma and John Cage. Together with visual artist Milton Cohen, the artists created Space Theater, multi-media works that utilized dance, sculpture, light projections, and electronic sound. Mumma and Ashley also worked together to found the Cooperative Studio for Electronic Music and helped establish the ONCE Festival and the Sonic Arts Union. Ashley began to compose video operas in the late '80s, one of which is Perfect Lives (Private Parts).

John Shirley-Quirk (August 28, 1931-April 7, 2014)
John Shirley-Quirk's lyric baritone voice, while not large, commanded a wide dynamic and expressive range; he had a wonderful sense of phrasing. It was as a Lied interpreter that he was best known; his intellectual curiosity allowed him to explore the inner world of the works he sang. His recordings, particularly of the works of Benjamin Britten, document his fine artistry.

Nicola Ghiuselev (August 17, 1936- May 16, 2014)
Nicola Ghiuselev had the rich, full timbre and seemingly effortless low notes that characterize the classic Slavic bass voice. It also had a strong enough top that he could perform bass-baritone roles such as the four villains in Offenbach's The Tales of Hoffmann, and even Mozart's Don Giovanni. He first studied both painting and music at the State Conservatory in Sofia, but after deciding he had better career prospects as a singer, he concentrated on that. He made his opera debut at the Bulgarian National Opera in 1960 as Timur in Puccini's Turandot, and soon rose to starring roles with that company. In 1965, he made his Metropolitan Opera debut as Ramfis in Verdi's Aida during a company tour, followed two years later by his Covent Garden debut as Pagano in Verdi's I Lombardi.

Lee Hyla (August 31, 1952-June 6, 2014)
Lee Hyla composed works for the Kronos Quartet with Allen Ginsberg; jazz saxophonist Tim Berne; the Orpheus Chamber Orchestra; and the London Sinfonietta, and he was commissioned by many organizations including the Concert Artist's Guild, Meet the Composer, and the Quintet of the Americas.

Julius Rudel (March 6, 1921-June 26, 2014)
Julius Rudel was one of the best-known American conductors associated with operatic performances. Long connected with the New York City Opera, Rudel was instrumental in engaging Beverly Sills as a lead singer, and in promoting the revival of Italian bel canto opera. In 1961, his home nation of Austria presented him a special award for his service to arts and sciences. He was also a Chevalier des Arts et Lettres in France, recipient of awards from Israel and Germany, and holder of several honorary doctorates.

Loren Maazel (March 6, 1930-July 13, 2014)
An American conductor of international stature, Loren Maazel led many of the world's leading orchestras over a career of more than seven decades, holding positions with the Pittsburgh Symphony Orchestra, the New York Philharmonic, the Vienna Philharmonic, and perhaps most significantly, the Cleveland Orchestra, with whom he had a lasting influence.

Carlo Bergonzi (July 13, 1924-July 25, 2014)
Carlo Bergonzi sang regularly at La Scala, Covent Garden, and the Metropolitan Opera through 1974, specializing in Verdi, but including more than 40 roles in his repertory. Known for his beautiful tenor voice and excellent characterizations, Bergonzi officially retired in 1994, but made a surprising appearance at the age of 75 in the role of Otello in a concert performance at Carnegie Hall in May 2000.

Peter Sculthorpe (April 29, 1929-August 8, 2014)
Peter Sculthorpe was the most internationally prominent Australian composer to emerge in the second half of the 20th century. Sculthorpe incorporated a number of influences in his music, including European modernism; Aboriginal chant; the traditional musics of Japan, Tibet, and Ghana; and Balinese Gamelan. His music is frequently characterized by exotic instrumental sonorities, slowly evolving soundscapes, melodic lyricism, and a strong rhythmic drive. Among his most important works are his series: Irkanda, for various ensembles; Sun Music, for orchestra; Small City for chamber ensemble; and his many string quartets, particularly No. 11, Jabiru Dreaming.

Frans Brüggen (October 30, 1934-August 13, 2014)
Master of the recorder, Frans Brüggen possessed a brilliant, translucent tone and fine interpretive powers. He was also an excellent teacher, and through his master classes and performances he elevated the recorder to international status. Brüggen also led his own avant-garde group called Sour Cream. He then turned to conducting, founding the Orchestra of the Eighteenth Century in 1981 and appearing as guest conductor around the world.

Licia Albanese (July 23, 1909-August 15, 2014)
Licia Albanese was one of the most beloved sopranos in the Italian repertoire, specializing in roles that suited her physical and vocal appearances of vulnerability and delicacy. She was associated with Madama Butterfly more than with any other role. Her voice was smallish and not always precise in pitch, and could turn edgy under pressure, but nonetheless, her vocal and dramatic intensity and sense of apt staging made her performances riveting.

Yondani Butt (1952 - August 28, 2014)
Conductor Yondani Butt was primarily known for his work in reviving obscure symphonic literature. Born of Chinese parents in Macao, he conducted orchestras in the United States, Canada, Latin America, Europe, and Asia. Early in the 2000s, he suffered from an ailment of the vocal cords, and he retired from conducting, but in 2009, he returned to record with the London Symphony Orchestra, concentrating on works by Beethoven, Brahms, Wagner, Schumann, and Tchaikovsky.

Magda Olivero (March 25, 1910-September 8, 2014)
The essence of verismo, soprano Magda Olivero won an enthusiastic following during her exceedingly long career. Colleagues who found much to criticize in other artists reserved special approval for Olivero, whose art and integrity they valued. Marriage and retirement in 1941 kept her largely away from the public, but when she returned to the stage a decade later, she resumed a performing career that carried her into old age. In addition to such verismo roles as Adrianna, Tosca, Fedora, and even Minnie in La fanciulla del West, she also devoted herself to contemporary works.

Christopher Hogwood (September 10, 1941-September 24, 2014)
Christopher Hogwood was one of the most prominent conductors of period-instrument performances of Baroque and Classical music. With David Munrow, he co-founded the Early Music Consort to undertake authentic performances of medieval music. Later, he led the Academy of Ancient Music, which specialized in performances on authentic instruments in period style. Hogwood did not limit his activities to these groups or to early music. Since 1981 he regularly conducted leading American orchestras, and he conducted his first opera in America in 1983, a production of Mozart's Don Giovanni in St. Louis.

Anita Cerquetti (April 13, 1931-October 11, 2014)
In a career that lasted barely a decade, dramatic soprano Anita Cerquetti established an immense reputation that survives into the 21st century. She retired at age 30, and countless explanations have been advanced to justify her early departure from the stage. Yet despite the mystery surrounding the end of Cerquetti's career, her career was impressive. The soprano's voice was large, bright, firmly supported and searing in its penetrative power, and she would have been a phenomenon in any age.

Stephen Paulus (August 24, 1949-October 19, 2014)
Paulus was an American composer of musical drama. After studying at Minnesota University, he became composer-in-residence of the Minnesota Orchestra in 1983. Paulus gained public recognition with The Village Singer, a one act opera. Another success was The Postman Always Rings Twice, first performed in 1982 in St. Louis, Missouri.

Lydia Mordkovitch (April 30, 1944-December 9, 2014)
Russian-born Lydia Mordkovitch became one of the leading British violinists from the latter half of the 20th century. A David Oistrakh protégée who lived in England since 1980, she was quite eclectic in her repertory, playing works by composers from J.S. Bach to Maayani, with 20th century Russian icons like Prokofiev and Shostakovich, as well as their counterparts from England—Bax, Alwyn, Bliss, Howells, and others—figuring strongly in her concert programs. She made well over 20 recordings, mainly for the British label Chandos, and concertized frequently throughout Europe, Israel, and the United States.

Jerzy Semkow (October 12, 1928-December 23, 2014)
Jerzy Semkow was one of the more successful conductors specializing in late 19th century Russian repertory, adding a panache to the music as his venerated teachers—Erich Kleiber, Bruno Walter, and Tulio Serafin—had. The Polish-born Semkow studied with those men in the West before receiving more invaluable training in Leningrad. He returned to Poland to lead the Warsaw National Opera, followed by a post at the Royal Danish Opera. In the late 1960s, he began guest conducting major American orchestras, becoming music director of the Saint Louis Symphony in 1976. In 1979 he went back to Europe to lead the RAI Rome Symphony Orchestra, but continued to appear frequently as guest conductor there and in the US.