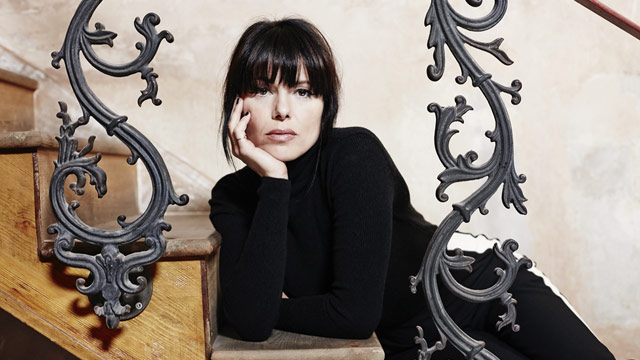 As Imelda May was working on her 2014 album, Tribal, she knew that she'd be taking a different path on her next record. She wasn't sure what direction she wanted to go, or how drastically her life would change in the meantime. That change has arrived in the form of Life. Love. Flesh. Blood, which finds May stepping aside from the punk-tinged rockabilly sound and visual presentation that had previously defined her career. She also divorced Darrel Higham, who had served as her guitarist since her 2003 debut, and contributed as a songwriter on her subsequent albums.

The new album's stripped-down, introspective aesthetic ("sophisticated and gorgeously rendered," writes Matt Collar in his review) reflects May's own soul-searching and growth over the past three years, exemplified on the coffeehouse-ready "Call Me" and the piano-driven gospel number "When It's My Time," but still leaves room for playfulness, like on the snarling "Bad Habit," which sounds like it could lead to a dark revelation but turns out to be about shopping too much.

The album was produced by the legendary T-Bone Burnett, and features a guest spot from Jeff Beck, who she's been teaming with on record and on the road for over seven years. We spoke with May about knowing it was time to move on from her previous sound, allowing an outsider to tinker with her music, and how to bring musical legends down from their pedestals and turn them into friends.

AllMusic: The record's been done for a while, how's your patience holding up?

Imelda May: I’ve been going crazy waiting for this album to come out. I finished recording it a year ago, and I got it ready for a winter release, and then the record company went crazy for it and changed their minds and said, “We want to get it all right,” they wanted to take their time. It’s good to have your record company take their time on it, that’s rare now. I wrote almost 40 songs for the album, and then I cut it down and we recorded 15 songs in seven days.

AllMusic: Even though the lyrics are ultimately very tongue-in-cheek, the song "Bad Habit" has a lot of swagger. Did you have that attitude early on in life or did it develop more over time?

May: I wanted that to sound like if you weren’t listening to the lyrics, that the bad habit was something really, really bad, you think, “She’s really badass,” and when you listen closer, it’s about shopping. I grew up in Dublin in the eighties, in a tough neighborhood, and I had a really good family and a really good community, but it was full of unemployment, because Guinness had computerized, so everyone in the area was put out of a job, so unemployment and drugs were rife. I had a really sweet family and sweet neighbors, but I’m streetwise. That’s just life.

AllMusic: "Levitate" has a very cinematic sound; did that song happen to begin with an image, and then you went from there?

May: I wrote that song when I was walking my dog, my mind was drifting, and I was looking up to the sky and started thinking about how it feels when you hold your breath for a long time, and then you start to breathe, and I could see myself rising up and letting myself rise up, levitate up to the sky. Then when I worked on it later, I was thinking I wanted it to sound like one of those film noir movies with the fabulous soundtracks, that’s exactly what I wanted. It’s about letting yourself rise, letting yourself breathe again.

AllMusic: T-Bone Burnett produced the album; are you a willing collaborator or do you get very protective of your songs when someone tries to tweak them?

May: I produced the first two on my own, or with a co-producer, and I’d make myself more open-minded, because that’s why I’d want to work with someone else. On this one, I was ready to open up and take on ideas more, that was one thing I wanted to do, I wanted to learn from T-Bone. There’s no point in getting T-Bone Burnett on board if you’re just going to do your own thing, anyways. And I don’t think he’d accept that, he’s a very strong character. I have really strong ideas about what way I want things to sound, but that’s what a good producer does.

We had many dinners and meetings before recording, which was lovely. We got on and became friends first, got to know each other a bit, which really helps when you’re in the studio. Then we talked about the songs at length, and T-Bone took many notes, and I was talking about what vibe they had, what song references I wanted, which changed the feel completely on some things, because he’d only heard the most raw demos, with just me and a guitar. He was great with that, and when we got into the studio, he’d listened to everything at length. A lot of it is getting the right people in the right place at the right time, and he’d thought a lot about the right musicians that would work, that would do the right thing. T-Bone didn’t have to push too hard with me, and I was open to learning and getting it right.

AllMusic: When you're in the control room listening to playback, who speaks up first after the song ends?

May: Both of us at the same time, and mostly we’re in agreement, which is great. He told me I had bionic ears, so we’re both hearing the things that need to be fixed. He closes his eyes and immerses himself in each track, and we were on the same wavelength for most of it, so there were no big clashes, we just wanted to get it right. I wanted a beautiful, classy sound with a good chunk of badass, and T-Bone does that really well, and he got that.

AllMusic: There's a lot more space in these songs than on some of your past records, was that something you sought out to do?

May: I knew I wanted to do that, and T-Bone was in agreement on that. Sometimes I would want to do it too much, so I’d leave more open space, and I spent a couple of days going in and doing backup vocals on my own with an engineer, and then T-Bone came back, and I wanted to take it all out, but T-Bone would say, “Leave it in, it’s beautiful.” He was great, and it was good that he went away for a couple of days to be able to come back and hear it with fresh ears.

AllMusic: There will probably be a lot of people hearing you for the first time with this record, who don't know anything about your more rockabilly albums and presentation. Since this album is a rebirth for you in several respects, I'd imagine that clean slate is an exciting prospect.

May: I’m really happy about that. I was aware that I was going to lose a lot of fans on this, and I thought I might gain some more. I’ve always done what I wanted to do, which is why I went into the rockabilly area in the first place. I did blues and jazz and rockabilly and punk, I was never pure rockabilly. As soon as somebody told me to drop the rockabilly stuff, that makes me want to do it more, because why not? If it’s that influential of a music, why would I shun that? So it makes me look at it more and be more interested in it, in a way. Not that it’s a stubborn thing, but I’m curious.

So I did it more, but then I pushed the rockabilly genre as much as I was comfortable with, and on the last album, I pushed it to a punkier edge. I wanted to go as heavy as I felt comfortable going on the last album, knowing that when I wrote the last album that I was going to step away, because I knew I’d taken it as far as I’d wanted to take it, that I’d hit a ceiling as a writer. But I didn’t know what this album was going to be, and I found that very liberating. I just have to grow as an artist and feel creative, there’s nothing worse than feeling stunted. I think it’s detrimental to any artist to do that, to box yourself in or to stop yourself from growing. I like to think that this album is a progression, that I wouldn’t have made it without exploring all the other things I did first. I don’t know what this album is other than an honest album, it’s just what I felt, and I’m still feeling it.

AllMusic: You've worked with a lot of musical icons, including Jeff Beck, Ron Wood and Robert Plant. Is there a point where you stop thinking of them as these legends and they become flesh and blood people?

May: With anybody I work with, there’s both of that simultaneously, because I’m aware they’re legends, I’m aware they’re brilliant at what they do, I’m aware I’m working with geniuses that will go down in musical history for all their contributions. But at the same time, they are humans, and if I’m working with somebody, I want to work with them and connect with them on a level in order to be able to do that, you can’t freak out, you have to just work on it and get it right. You do develop relationships with people, and Jeff and I are good friends now, I work with him all the time, and I love him dearly, he’s become a part of my life, both him and his wife. That happens, and I know he’s amazing, but he’s also human.

And Ronnie Wood, the same, he’s such a wonderful guitarist, and a phenomenal artist. His paintings are beautiful, but he’s a dad, he’s a husband, we can chat away, order Indian and complain about whatever. You have to get the balance right. Like Robert Plant, when I was singing with him, these are professionals, they also know how to make me feel at ease and crack jokes and be funny and sweet. I’ve been very lucky that everybody I’ve worked with, I’ve really loved working with, and it’s an absolute joy in my life, not just a career opportunity for me, it’s such a joy to meet these people and listen to them and learn and feel how great they are, and how nice and cordial they can be to me, it’s very humbling.