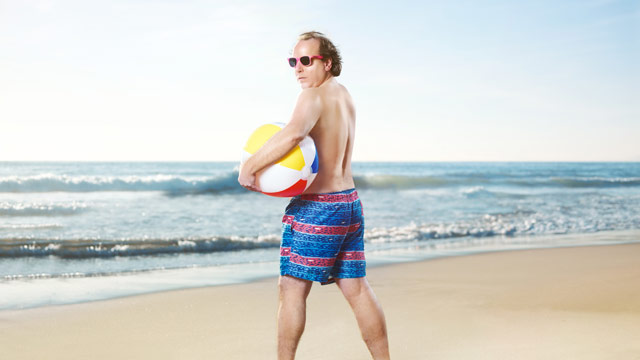 When he released his self-titled debut in 2000, Har Mar Superstar (aka Sean Tillmann) made a splash as a perpetually briefs-clad, gleefully tongue-in-cheek performer, which carried him through much of the decade. So when he released Bye Bye 17 in 2013, listeners were introduced to a Har Mar who had become "more about soul than sleaze," in the words of former AllMusic editor Gregory Heaney. Backed by a full band with horns and embracing classic R&B and pop-infused soul, the album clearly indicated a rebirth and a new, more mature direction.

That growth continues on Best Summer Ever, with Tillmann delivering 10 high-powered, emotive songs in a half hour, under the guise of a fictitious "Greatest Hits, 1950-1985" set, with Julian Casablancas in the producer's chair. We caught up with Tillmann to talk about working with Casablancas, why he felt the need to wait to show off his more serious side, and the power of succinct records. The album is due out this Friday on Casablancas' Cult Records.

AllMusic: Your last record seems like it caught a lot of people off guard, but in a good way. Did the positive response make you more comfortable with continuing to try new things?

Sean Tillmann: It felt like a big risk at the time, making Bye Bye 17, you never know how people are going to react to stuff. All the labels I talked to were really excited about it, but a lot of people I was talking to wanted me to change the project name or make it a new band, and at that point I was 34, and I was like, “What am I going to do, I’m not starting over.” The response eased my mind, there was a big, positive emotional response, so I felt great, I felt more validated as an artist than I had in a while. A lot of people think that Har Mar is one thing, but it’s sort of everything now.

AllMusic: But you probably still have to keep yourself in check a bit and not go too crazy.

Tillmann: I’ve been waiting for my voice to mature. I always wanted to make a soul record, I just didn’t feel I’d had enough life experiences to pull it off without sounding cheesy until I was in my mid-30s.

AllMusic: Is there anything on the new record that you weren't ready to try until now?

Tillmann: I think I’ve always been skirting the lines by playing a lot of different styles through Sean Na Na and Gayngs and Neon Neon and a bunch of other projects that I’ve been in. I think this one’s a little more scatterbrained, because I wrote whatever songs I was feeling at the time, I didn’t feel like I had to be in one particular zone, that’s why there are varied sounds and eras that I’m playing with.

I was confident that I could do whatever I want, so I wrote 20 songs and we decided which ones to pick at the end. I don’t go into a project thinking too much about it, I write a bunch of stuff and see what works. I threw a bunch of stuff at the wall, played with a bunch of themes, and halfway through the writing of it, the idea came up that it would be my greatest hits from 1950 to 1985, and that helped more as a guideline for producing it at the end, most of the songs were written on an acoustic guitar in my room. It really helped mold the production of everything.

AllMusic: Knowing that you were going to work with Julian Casablancas, did that impact the sort of music you were coming up with?

Tillmann: Not really. I knew the fact that I was working with Julian made me more comfortable with leaving the songs more open-ended when I was writing them, so I didn’t have to marry a concept and be beholden to it, because I knew he’d bring a lot of cool ideas near the end or in the process, so that made it more casual for me.

AllMusic: So the idea was always that he would be contributing musically as well as producing.

Tillmann: I went in the studio first by myself and put together a band, and then I went to Tornillo, Texas, to the Sonic Ranch, and just made a bunch of the songs, and I knew once we got to the studio with Julian and Shawn Everett that we’d be mixing them in totally different ways, messing with sounds and adding stuff, editing things, so it made it a little easier to jump in and just start doing it, because you don’t have to have a finished idea, you can piecemeal stuff, and it’s a lot easier now with recording techniques that are less dependent on fully knowing what you’re doing when you go in.

AllMusic: He seems like the kind of guy who doesn't just put his name on things, he gets invested.

Tillmann: That’s the thing, he didn’t even put his name on it, he didn’t even want credit for it, the way he runs his label is he just wants to be involved enough to where he’s proud of every song on every record that he releases, so he’s not even looking for a producer credit, it’s just a cool collection for him to have as the label grows, what he was into at the time, being something he can always look back on and be proud of.

AllMusic: He wrote the first song most people heard from the new record, "Youth Without Love."

Tillmann: That’s the first time I’ve ever done a song on one of my records that wasn’t just a cover but was written by someone else. When we started picking songs for the album, we had eight we definitely knew should be on there that I wrote, and then basically Julian played me a bunch of demos he had around, and that song jumped out at me immediately. It was a lot of fun to make that a reality.

AllMusic: Like Bye Bye 17, this is a pretty short album, which is refreshing.

Tillmann: My songs are always going to be three-minute pop songs, I’m not going overboard with prog renditions of anything, but I feel like 10 songs is a good amount for the attention span right now. It’s the perfect amount where you can listen to the whole thing twice in a row and it doesn’t seem weird, when it’s done hopefully you’ll let it start over again.

AllMusic: There are a few rowdy tracks towards the end, like "Famous Last Words." How did that song come together?

Tillmann: I got the idea from researching the last words of a bunch of interesting people, and it’s really interesting to see what certain people would say. All the lyrics are pulled from real last words that people said right before they went, like Truman Capote just said “mama” over and over again before he died, and Steve Jobs said “wow” over and over. I like Eugene O’Neill, his last words before he died were something like, “Born in this hotel room, goddammit, I’m dying in this hotel room.”

The whole idea, once I got the words together, I felt like it should be more abrasive, and I’ve always wanted to make a Danzig-esque song, so that came together. I didn’t sit and make a calculated plan with it, but it seemed to be right. That’s one of those things where when I was writing it I was saying, “This is never going to be on the record, it doesn’t fit,” and somehow at the end, the way it came together with those 808 drum blasts, I don’t know how it works or why, but it does.

AllMusic: Are there any musical styles you're still itching to try?

Tillmann: I’m not sure, there’s tons of different styles of music I’d like to try but I’m not sitting around saying, “I have to make my country record someday.” I think I’m in my zone right now, I have the elements of what I want to do, what I’ve always wanted to pull off. As I grow, my influences and what I want to do change with the times, so I can’t really say right now. I feel fully on track and psyched about what I’m doing, so you never know.

AllMusic: It must feel gratifying to know that you've hit your sweet spot.

Tillmann: I try to stay away from trends, any time you do that you paint yourself in and put an expiration date on it. So you have to do what feels right.

AllMusic: Would there ever be a "Sean Tillmann" record?

Tillmann: At this point, there’s not really any reason to do that. Har Mar used to be more beat-based and more new R&B, Sean Na Na was more Elvis Costello pop guitar songs, and now it’s all merged into one at this point and it’s all under the Har Mar name. If I have a lot of extra material, there’s certain things that wouldn’t work as Har Mar records, there will be a bunch of weird projects.

AllMusic: How are you feeling about how the new songs will work in the live set?

Tillmann: I’m psyched, we just started getting everything together in rehearsals, and it’s a bigger band, there are seven of us now, everything sounds really cool together, the show will sound more varied and more like a greatest hits experience than before. It’s really fun, I like to take people on more of a journey.

AllMusic: Does the expanded band mean you'll have new arrangements for older songs?

Tillmann: Yeah, we’re not playing to tracks anymore, there’s horns, more live horns and keyboards, there’s a lot more opportunity to recreate things from the records verbatim or interpret them in a different way. It’s a lot of fun, it feels more musical than it did before, which seems weird. When you’re playing to tracks, you don’t have much opportunity to break out at all. Now we can mess with arrangements and making it more showman-y.

AllMusic: Do you have your fashion figured out for this album?

Tillmann: I’m still trying to figure it out, there’s not a look for the album yet. I go through phases, and that just instilled some dread in me that I need to get my shit together, wardrobe-wise.

Har Mar Superstar has tour dates lined up through August