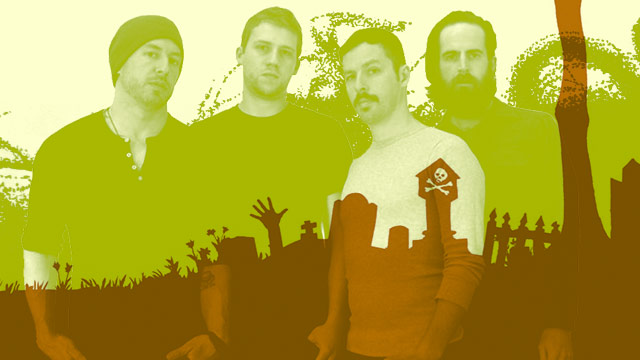 For the past two weeks, I’ve been going through a grieving process: not for a departed family member, friend or pet, but for a band. When I flew back to my former stomping grounds in New York to attend the final Dillinger Escape Plan show, my enthusiasm levels were well within the standard range, somewhere around “this should be a nice time, and maybe I’ll see some old friends there.” That was still how I felt at the conclusion of their set, but in the following days, the finality of it started to sink in. I found myself going through setlists of previous gigs I’d attended, watching videos of the show I’d just seen, and scouring lists of ancient tour dates, saying “I wish I had been aware enough to see them back then, too.”

When I was a teenager and would pester my parents to let me attend all manner of marginal FM radio-sponsored shows, the denial of these requests was often paired with the justification “there will always be another show.” The vast majority of the time, they were right; there would be another, better show. But what if there’s not?

The concept of the “retirement” tour has been heavily jaundiced by the ostensible farewells and cheeky comebacks of artists like Ozzy, Cher and Kiss. Fan goodwill and fear of the end became something that aging artists could capitalize on, wielding “this is the last time!” as a sort of threat for the fans who had grown used to seeing them on the amphitheater circuit every other summer. So it wasn’t surprising when the crew next to me spent the moments before the last Dillinger Escape Plan show handicapping what they deemed to be an inevitable return: Coachella 2022? New England Metal and Hardcore Fest 2020? Moments later, this same group optimistically calculated what year the band would be eligible for induction into the Rock and Roll Hall of Fame, which they treated as a similarly foregone conclusion.

Beyond reunion speculation, cynicism was left at the door, and we were rewarded with a 100-minute set, bookended by the opening cut from the band’s first album and the closing track from their last, and a deeply-satisfying blend of deep cuts and classics in between. Although I’d seen the band around 10 times before, there was a special crackling nervous energy before they took the stage, the sort of tension that fills the room before a prize fight, the feeling that you’re about to witness something definitive, dramatic and final. Had we all strolled in with a smirk saying, “Oh, this is just an LCD Soundsystem ploy,” we’d have all robbed ourselves of a profoundly visceral experience.

But for a band as technically demanding, physically confrontational and generally explosive as the Dillinger Escape Plan, who have always meant what they said and said what they meant, I'm inclined to believe that this was truly the end. It took witnessing the final show and ruminating for a few days to grasp that these guys have moved on and closed this chapter, which, by extension, puts a particular part of my life in the rearview mirror, as well. Maybe it also hit me because, age-wise, the members of the band are my peers, and they were acknowledging the merits of knowing when to leave the party. For them, maybe it means that they don’t want to wake up and discover that they’re suddenly 50 years old and are playing their intricate, blast furnace songs at a fraction of their power. As for me, perhaps I belong in mosh retirement. We all have our own trajectories.

It’s rare that we get to give a proper goodbye to the artists we love. Fans of Pantera, Tom Petty, Prince, and countless other defunct bands and deceased musicians can only imagine the communal power of a final show, the chance to hear those songs one last time, and to feel that it’s truly the end. We also don’t know how may shows we have left in us. Yet it’s as if there’s a fear of the moment being retroactively ruined by an artist’s potential future decision, therefore preemptively denying our opportunity to have a genuine experience and a sense of an ending when it’s presented to us.

But speculation serves no real purpose in these situations; we can believe in that closure because we want to. No one will get in your face and say, “Ha ha, you got tricked into being reminded why you cared in the first place!” For me, the Dillinger Escape Plan will always be a band whose music is inextricably linked to the chaotic, reckless energy of my twenties and those years in New York, and I’m thankful to have had this one last snapshot. Hopefully you can find one, too.

When you’re fortunate enough to find an artist that makes you care about music with the unbridled earnestness that you were capable of in your youth, and who treats their audience well, you owe it to yourself to take that ride all the way. None of us got into music as cross-armed, smirking skeptics standing on the fringes demanding to be impressed. It’s a role we can increasingly inhabit as we age and start to tell our own kids or less-jaded friends that “there will always be another show,” but here’s the thing: sometimes there’s not.