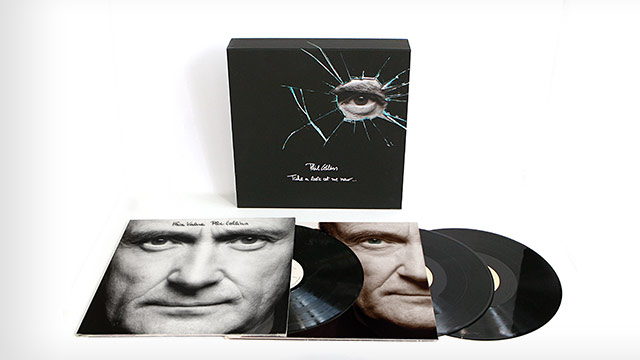 After several years of inactivity, Phil Collins seems to be getting back on the horse. He played a show last Friday in Florida, his first proper performance since 2010. The set included his iconic "In the Air Tonight," as well as covers of "Knockin' on Heaven's Door" and "My Girl," plus "Easy Lover," a track co-written by our friend Nathan East (read East's recollections of how the track was written), who is still part of Collins' live band.

He's also been working through his back catalog with a reissue series, which began with expanded editions of 1981's Face Value and 1993's Both Sides. And yes, the album covers have been updated with current images of Collins, you're not imagining things. The music itself remains the same. We're giving away 180-gram vinyl editions of both of those albums to one lucky AllMusic reader.

There are two ways to enter for your chance to win the new vinyl editions of Face Value and Both Sides (choose only one method):

1) Log in with your AllMusic account—or sign up if you aren't already a user—and comment on this post with the name of your favorite Phil Collins song. Be sure to register with an email address you check regularly, because that's how we'll notify you if you are selected.

2) Mail us a letter or postcard with the name of your favorite Phil Collins song, plus your contact info (email address, Twitter handle, or phone number) to AllMusic HQ, postmarked by Wednesday, March 23.

Face Value and Both Sides are part of a broader reissue campaign, which will ultimately combine to comprise the Take a Look at Me Now box set. For more information on these releases, head over to Amazon.

Rules:
• Giveaway begins Monday, March 14. Winners will be selected on Monday, March 28.
• Winner will be contacted via the contact info they provided, so be sure to register with a valid email address that you check regularly.
• If no response is received from winner within 72 hours, a new winner will be drawn from the pool of candidates.
• Must have a United States mailing address (due to taxes, customs regulations, and the complexity of international sweepstakes rules).
• Must be over 13 years of age to enter.
• One entry per household.

Are you a publicist or manager looking to do a giveaway through AllMusic? Drop us a line: nyyzhfvp_cerff@nyyzhfvp.pbz.